I was quite excited about ACL 2007 having had a love-hate relationship with the past two years of my Austin City Limits experience. Suffice it to say, my first year I was there (briefly) with my mother when we watched my beloved Death Cab for Cutie (whom she kept calling Deadly Taxi) and not only was it 107 degrees and a dust bowl (i know you all remember), but after remarking at the strong smell of weed, my mother spoke loudly enough for everyone within a tweny foot radius to hear, "I wonder if they're parents know they're smoking pot!?" At which point I pulled my pink cowgirl hat down over my face and we left.

This year I think I actually got high off of second hand smoke at the Stephen Marley concert. 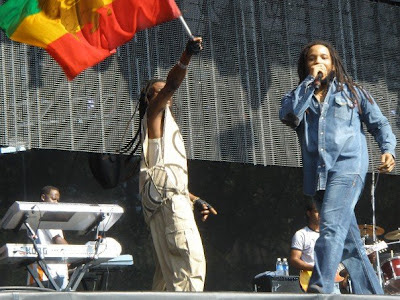 But I guess that's to be expected. He's a Marley. The cloud of pot smoke was thick above the crowd. I left half-way through to go get something to eat.

However, that smoke was not as thick as the black mushroom that dominated the north east corner of the park on Friday. I was watching Pete Yorn play and noticed a lot of fans around me looking away from the stage. Weirdo's, I thought. But when I noticed the whole band on stage all looking the same direction as they sang, I became supicious. Was Elvis behind me? Some other famous icon? No. 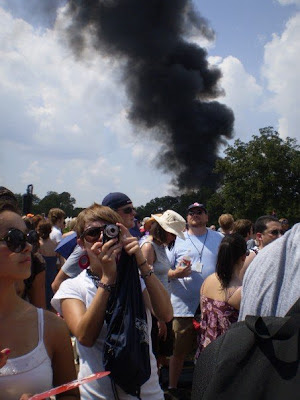 I turned around to discover that a trailor and truck had blown up and a huge fire with black smoke was shooting up through the trees. Awesome. They stopped the concert briefly for announcements but everyone remained calm. Pete Yorn motioned prayer hands toward the cloud and the concert continued. On a mostly unrelated note, Pete Yorn wins for hottest arms. Not gonna lie. 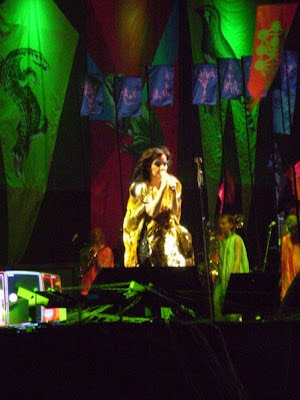 Later that night we experienced fire number two when a speaker began shooting flames right as Bjork was "ending" her set. An encore was planned, so they merely waited for the security guy to spray a fire extenguisher on it before coming back on for the encore. Bjork of course needed no fire to spice up her show because she was PHENOMINAL. Definately suitable for my expectations. The stage had banners that I think were Kabhala symbols. Her brass ensemble from Iceland were in colorful garments that glowed when the black lights were on. Bjork herself was clothed in a large gold shimmery frock. Her music is so beautiful and creative, it was hard not to love it. Although I wasn't so convinced as i STOOD for 5.5 hours at the front of the AT&T stage before her concert. Shoot me now. But it turned out to be completely worth it once her show started.

What wasn't worth it was waiting for Regina Spektor. I hate to say it, but it's true. Regina was fabulous and definately wins the award for most awed by ACL and appreciative of the fans. But Angie and I busted our butts to get up close and i refused to empty my baseball sized bladder only to discover that although we were only two people away from the gate holding back the crowd, when Regina sat down, we couldn't see her behind the piano. it was disappointing, to say the very least. So I spent the rest of the concert with my neck craned to the east trying to see the jumbotron tv screen and block out the terribly loud hispanic women behind me singing along with EVERY WORD. But Regina's smile made everything all right. She was so adorable in her humility towards the crowd and getting to play ACL. She's rad.

Damien Rice also knocked our socks off. Granted, I LOVE him anyway, but in the middle of his set, his electric guitarist sat down on a bongo box (sorry, i don't know the real name for it) and began playing that in addition to the snare and high hat that were in front of him. He and the drummer began a drum solo/duet that even shut up the annoying college kids standing around chatting and waiting for Muse. At one point, I had to actually tell a drunk college kid to please stop talking to me because i was trying to watch the absolutely amazing show. Unbelievable. (The concert and the chit chat).

Winner of best crowd of fans has to go to Indigo Girls. Definately the most chill, the most fun, the least pushy, the best to dance to... just really fantastic. And even though they weren't the "headliners" the audience went so nuts when they were through, they came back on (to their own surprise) and played an encore. So genuine and still such fabulous musicians.

Also still going strong was Blonde Redhead. Their electronics were fantastic and I especially loved when she looped her voice and then sang over it. Very, very cool.

Spoon definatley wins LAMEST concert of them all with no verbal reference to Austin (even though they're from here), only one thank you, and a generally bored disposition. DeVotchKa was a surprisingly delightful concert and from the tuba to the accordian it was generally fantastic. Ben Kweller was fine (no coke-induced nose bleed this year) although I couldn't get over how YOUNG he looked. Holy cow. I would have guessed 15 if I'd have met him on the street. But then when a close-up of his hands reveiled a wedding band, I assumed I was wrong. But the man has NO FACIAL HAIR. He looks like a really talented little kid who writes great music. Joss Stone has a beautiful voice and great back-up singers, but was a thumbs down for me because her songs all sounded the same lyrically and musically. ANN'S OVERVIEW:
Best Arms Playing the Guitar: Pete Yorn
Cutest Band Members: DeVotchaKa (lead singer and drummer!)
Best Show: Bjork
Best Drum Solo: Damien Rice
Best One Person Band: Regina Spektor (at one point she was drumming with one hand on a wooden chair, banging her foot on something on the stage and playing piano with the other hand)
Best Audience: Indigo Girls
Most Fun (overall concert): Indigo Girls
Most Exciting: Bjork
Most Adorable and Terribly Talented: Regina Spektor
Most Disappointing Performance: Spoon
Most Disappointing Choice of Crowd Placement On My Part: Damien Rice or Regina Spektor
Most Inspiring: Indigo Girls
Band With the Most Songs That Got Stuck In My Head: Blonde Redhead
Band I Will Most Likely Beg to Let Me Sing Back-up For: Damien Rice (he sang all the girl parts in falsetto)
Performer Who May Have Driven Me to Quit My Day Job: Regina Spektor. 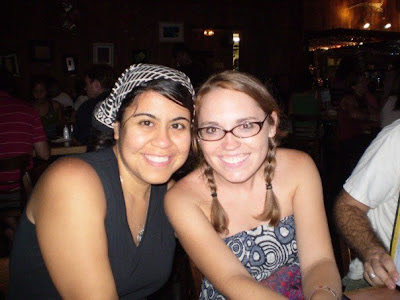 Nice re-cap. I was just searching around to compare reactions to this year's festival and realized it's already been a month since I was in Austin! Anyway, I concur on all your best of choices, except that Devotchka was my favorite, far and away. Definitely the cutest, too.