On Freedom of Religion

On Freedom of Religion, or One Thing the Baptists Got Right.
I had the following conversation on Facebook the other day (names have been omitted)... 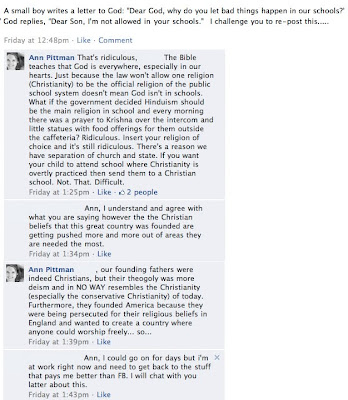 Now you understand why I wonder if I believe in separation of church and state because I'm a freedom-lover or because I'm a Baptist. The big picture: you get to decide your own faith and how to practice it. I can't deny you that right nor can the state.
Awesome. Amen.
On the other hand, this sucks. What Martin Luther set in motions hundreds of years ago when he demanded (among 98 other things) that the common person have access to the Bible herself is the folk religion (arguably the religious right) prevailing in America today. In other words, this not very Biblical "pull-yourself-up-by-your-own-bootstraps, God-helps-those-who-help-themselves, love-your-family-hate-your-enemy, I-can't-tell-you-the-Ten-Commandments-but-by-God-it-better-be-hanging-in-the-courthouse" Christianity modeled by the religious right is a direct result of Luther's insistance that the biblical scholars (who also happened to be horribly corrupt church leaders) get out of the way and let each person meet God where they are. Check out this article on "phantom Biblical passages" where culture has corrupted what the Bible actually says, or doesn't say.
In other words, soul competancy... religious freedom...? They're a double edged sword.
But that's just what the Baptists believed.
So what was the predominant religion of our forefathers? Well, according to Benjamin Franklin's autobiography (thank you Billy Jewell Bible School "Responsible Self" class 1996): My parents had early given me religious Impressions [Roman Catholocism], and brought me through my Childhood piously in the Dissenting Way. But I was scarce 15 when, after doubting by turns of several Points as I found them disputed in the different Books I read I began to doubt of Revelation itself. Some books against Deism fell into my Hands.... It happened that they wrought an Effect on me quite contrary to what was intended by them: For the Arguments of the Deists which were quoted to be refuted, appeared to me much Stronger than the Refutations. In short I soon became a thorough Deist. Revelation had indeed no weight with me as such; but I entertain'd an Opinion, that tho' certain Actions might not be bad because they were forbidden by it, or good because it commanded them; yet probably those Actions might be forbidden because they were bad for us, or commanded because they were beneficial to us, in their own Natures, all the Circumstances of things considered.
You still with me?
And how about Thomas Jefferson? Well, you've probably heard of the Jefferson Bible... Our third president's cut and paste version of the text (explicitly leaving out Jesus' miracles). While I don't have a biography of him on hand, Jefferson's move through religion (he hated the Catholic church, thought clergymen to all be corrupt and rejected most Christian doctrine including the doctrine of the Trinity) was generally based on his belief in Jesus as a Moral Teacher and God a material (not Spirit). In private letters, Jefferson refers to himself as a "Christian" in 1803, "a sect by myself" in 1819, an "Epicurean" later that year, a "Materialist" in 1820 and finally a "Unitarian by myself" in 1825. Most scholars would just classify him as a Diest who liked to cut up his Bible.
Needless to say, he was too liberal (in the true sense of the word - as such I, truth be told, am not) to attend the Episcopal Church of America at that time, let alone Willow Creek or The Potter's House or Saddleback or Salem Lutheran Church or Wasilla Bible Church or Trinity United Church of Christ or Wyatt Park Baptist Church or even First Baptist Church of Austin Texas.
Do I need to go on? John Adams - Unitarian. Alexander Hamilton - Evangelical Presbyterian who tried to start "Christian Welfare Societies" for the poor. James Madison - attended an Epsicopalian church (but most scholars consider him a Deist as well). George Washington - wouldn't take communion and never mentioned Jesus Christ in any of his writings. Considered a Deist but since he left virtually no writings in which he wrote about God, church, theology or religion (twice in his life he commented on a sermon), we don't really know.
So what then, about the founding father's faith do you FRIEND and all other people seeking to get back to those times, is so appealing? The fact that they picked and chose what they wanted to believe despite orthodoxy (although most conservative churches do a similar thing) or the fact that they intellectualized and internalized their faith, brooding over it, writing about it, and wrestling with it? The fact is, they believed that faith should be the choice of the people, paid for by the people and attended freely by the people so much so that they believed it is an essential right afforded to every human being and protected and ensured by the government.
Amen. On Freedom of Religion. And why I think the Baptists got this one right.
at 1:40 PM

Thank you for arguing this not only intelligently, but beautifully! - Jennifer

well written with many good points.

Ann, I LOVE your blog. I LOVE that you wrote it from the perspective of those who have strong religious convictions, and yet understand the fundamental importance of the separation of church and state. I love that you referenced some of the historical events that influenced the reasoning that the founding fathers had in being clear in wanting that separation. It is brilliant piece! As a student of history, I know that we have been through many periods where reason seemed all but lost, and the idea of secularism was greatly in question. What scares me is the silencing that seems to be occurring within the GOP. I am solidly a democrat, so there is no chance that I will not be voting for Obama. At the same time, when I see the more moderate wing of the GOP, like Tim Pawlenty, dropping out, and someone like Mitt Romney, who, like him or not, probably has the best business and economic credentials to go up against Obama, but is "the wrong religion", it underscores the "no compromise" attitude of the party, and their willingness to turn civil liberties on its head! We are living in scary times, and I am worried that my children are not going to enjoy the same rights, freedoms and choices in their lives, that I have enjoyed in mine! Keep writing, Ann! You are awesome!