The Relevance of Ragtime: Racism

Opening tonight at the brand new Topfer Theatre on South Lamar is Ragtime... a musical with book by Terrence McNally, lyrics by Lynn Ahrens and music by Stephen Flaherty.

So buy your tickets now.

Rewind to two weeks ago.

On the Karen Kirkendall stage of the Topfer Theatre at ZACH Scott, I performed (along with the rest of the Ragtime cast) with Tony-award winner, Brian Stokes Mitchell, whom ZACH brought in to help fund raise for the Topfer because Stokes played the original Coalhouse Walker in Ragtime on Broadway.

But even more amazing than his voice or his delightful personality or his dashing good looks, was a story he told onstage that night.  Having received hundreds of letters from fans every year, Stokes remembers a four-page letter he received from a man in Texas who had travelled to New York, visited Broadway, and seen Ragtime.  After three and a half pages detailing his life story thus far, this twenty-seven year old man finally wrote, "I saw you in Ragtime, and it was wonderful.  And I wanted to thank you, because it wasn't until that night at the theater, that I realized I was racist."

And that is why Ragtime is important.

Please, for the love of God, don't say racism doesn't exist anymore... that it is irrelevant... or that it is any less damaging than it used to be.  Because it isn't.  It just isn't.  Cue collage.


Welcome to the 21st Century where it's okay to use the "N" word, and compare African Americans to monkeys, and advocate sending them on slave ships back to Africa!  You guys!  Not only that, but these signs are about our PRESIDENT.

Some of you may remember the poem I wrote several years ago after a Latino man was murdered by several African Americans in the wake of a large celebratory black heritage festival.  And earlier this year there was the murder of Trayvon Martin by George Zimmerman.  Which brought to mind Rodney King.  And the list goes on and on and on... not to mention the statistics.
Our culture has serious issues with non-Anglo persons.  The fact is, racism continues because it's a vicious, ugly culture we live in. 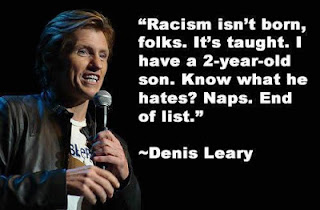 Sometimes, as was the case with the young Texas man who saw a musical in NYC, racism can be untaught, and we can begin to see the world with new eyes.


A million years (or 24 months) ago when I was a minister, I wrote this in a sermon:

"...people are screaming for help. The statistics are out there, but often the oppressed cannot do much themselves to change their situations, and so it is the responsibility of the oppressors to repent, and begin to actively work to bring justice to where it is needed."

The man who wrote the letter to Stokes is living proof that it does happen.  Self-awareness arrives.  People say they're sorry and work to make change.  It happens.  I have to believe it does.

And so often, art helps that happen.

But Ragtime isn't just about racism.  It's about classism, immigration, feminism, sexism, capitalism, terrorism, activism, postpartum depression, relationships, love, art, lust... the list goes on and on.  I wish I could deliver a real paper or lecture on the relevance of Ragtime, but it would seriously take forever, and it would spoil the story if you go see it... when you go see it.

However, don't let this blog post make you think this show is a downer.  Rather, it is a beautifully redemptive story with crazy vaudeville numbers and quirky costumes and even banjos!

Until you see it however, may I leave you with this beautiful quote by a man who made quite a journey of the heart himself... Coalhouse Walker.

"Your sword can be a sermon or the power of the pen.  Teach every child to raise his voice, and then, my brothers, then will justice be demanded by 10 million righteous men!"

To pens!  And art!  And changed hearts!  And Ragtime! playing October 18-November 18 Wednesday thru Sundays in the Topfer Theater at ZACH.
at 2:56 AM