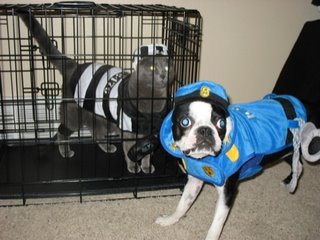 But I finally have a yard (even if it isn't fixed yet) and with the recent rains, i even have grass. I've wanted a dog to take on walks with me as a walking companion and as a safety measure. I've wanted a dog because they're different than cats and I just kind of want one. I've wanted one to bark at strangers (another safety measure) and scare them away from my house and yard (not that there has arisen a need for that yet, but i'm wishing for pre-emptive strikes here).

It's not hard to tell what's been on my mind lately. If it's not heartbreak, it's halloween. And there's been some nerve-wracking safety issues popping up lately in austin (as in every city) and maybe its the time of year, or maybe i'm finally starting to take everyone's warnings about safety seriously, but i've moved the "someday i'd like to get a dog" to "i want a dog."

I told amy today. She's driving to St Jo Mo and picking up Emmers on the way. That means she'll probably tell emily and then it's only a matter of time before the good news (or the frightening tale) gets delivered to my parents. So that's why I'm blogging about it - cause I know the ones who will freak out about it the most will find out by this afternoon anyway and by then it may be too late. wa ah ah ah. (that was for the halloween effect). Ineffective via internet, I know.

I don't think you should get one. BUT if having one would make you feel better security wise, then just don't get a little dog that yips at everything that moves. Get one that when it does bark, it barks. No yippers. Chris and I might not come over if you get a yipper. Plus, those won't scare away anyone. Except Chris and I. But just because it'll be annoying.

It's not the one in the picture is it? That one is butt ugly.

I searched all day, high and low. Taking some good advice, I said no to all puppies and peeked into every adult dog's cage across town. Looked into their eyes, took note of their body language, size, age, etc. etc. etc. And after what must have been a hundred dogs today, a lecture from the woman at the city pound about registering my indoor cats and answering the all imposing and self exposing question posed "Why do you really want a dog?" (thanks Frank), I realized I perhaps don't want a dog. I want a walking partner and someone who makes me feel safe. I mean a dog, a dog who makes me feel safe. A dog. And then I realized, although I'd like to have a dog, I didn't go on this frenzy of a dog search because I really want a dog, I went because I want a partner, someone to make me feel safe, a man. I'm not doing this for my safety, I'm not doing this for my health, I'm doing this for my heart.

And maybe that's the wrong reason to get a dog...

Ann said...
This comment has been removed by a blog administrator.
7:08 PM

Jude, the cat-neice you've yet to meet, was a rebound purchase. Worked like a charm. I still think he was one of the best ideas I ever had. Andee

um, greyhounds need lots of action - i mean activity. you want an older dog, 5 years-plus, that's been with just one owner, no kids but doesn't mind kids - or cats. That way once he/she bonds with you, he/she will likely bark at strangers. You definitely do not want a hyper breed. You need mellow.
And it's okay to have a dog when you really want something else. I got my dog the same day i got a really shitty phone call from the person I wanted more than the dog. And me n the dog are doing okay.
He sleeps on the floor.