When I was somewhere around the age of 11 or 12, I was in a play that I just finished assistant directing with Trinity Street Players and which is running THIS WEEKEND ONLY, The Best Christmas Pageant Ever. I played Imogene. "Type casting," my sister said; Imogene is the oldest girl and the ringleader of the infamous Herdmans, six children who are the bullies of the community. They lied and stole and smoked cigars, even the girls! The Herdmans had never set foot in a church until they heard there was free food.

And in the show I was in. I really had to smoke. Here's proof. 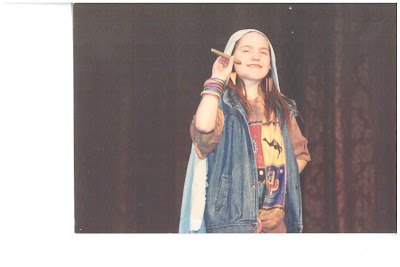 At one point in the play, Imogene Herdman is found smoking cigars in the ladies room wearing the Mary (the mother of Jesus) costume. That, of course, was the scene the local St. Joseph Gazette newspaper wanted a picture of for their article. So the girl who played Beth (the narrator) and the girl who played Alice (the know it all) and I all showed up for our photo shoot one Saturday afternoon and I smoked two or three cigars while the photographer worked on getting the best shot. Unlike Bill Clinton, I only inhaled once or twice, and at the young age of 11, that was definitely on accident.

The Best Christmas Pageant Ever is a delightful play that everyone in Austin should come see whether you're six or 29 or 82 years old. It's a great family outing or would make for a very cosy and sweet date night.

While our version of Pageant doesn't have Imogene smoking cigars, it does star my best friend, Michelle 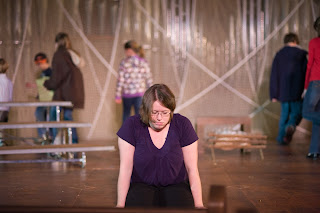 and was directed by myself and my other best friend Amy. 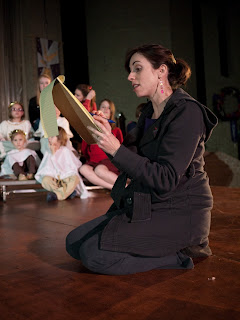 While working with 521 children (or maybe just 21) often made me want to pull my hair out or have a hysterectomy, it was an awesome learning experience and I really have fallen for some of those little monsters a.k.a. baby angels (side note: never reference younger children with names like "little monsters" in front of older children because children, no matter their age, go home and tell their parents what you said. yikes. like i mentioned, this was a learning experience).

Anyway, if you're in town or even close to town, come see our show. And be reminded that Jesus was not born to a family modeling what society tells us are worthwhile attributes: wealth, power, perfectionism and good manners. Rather, the story of Christ is one of humility, poverty, and the unpredictable nature of God.