"It's a form of torture," she said. "They interrupt people's sleep when they want to get information out of them. They let them sleep for a few hours and then wake them up. It's a torture method."

I'm sleepy all the time. There's many factors for this but one of them is my cat, Potter.

"I love cats," my therapist explained. "But your cat needs to cut that sh*t out."

I had been telling her about how I usually get up three times a night - even if it's just to go out in the kitchen and shake the kitties' food bowl.

"I do, but then he slides his paws under it, and he shakes the door back and forth."

Usually it's Zorba who gets a bad rap from my adoring public. "Satan's Little Helper," my friends call him. "The Vampire Cat." "Avoid like the plague," they warn newcomers.

But it's his brother, Potter who's falling under scrutiny right now. Precious little night-stalker Potter.

Zorba on the other hand is recovering from eye surgery and getting shaved... again. Here's a pic of him naked with the cone. 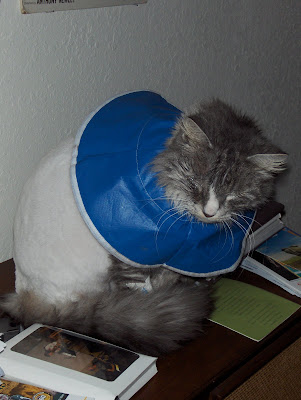 That damn eye surgery cost MORE THAN TWICE what I thought it was going to and while I don't blame the cat, I'm also not going out to eat for the next six months of my life. No more dancing, no more organic food... ramen noodles for me.

I'm exaggerating, but not by much.

I adore the cats, I do. Zorba's kneading my stomach as I type and Potter's sleeping, reclined against my hip. (I blame any misspelled words on them). But apparently they're subjecting me to torture which may explain my constant fatigue and lack of energy.

And what the therapist says, goes... usually. So in addition to the ear plugs and sleeping pills (only used on occasion), I'm putting an ice water spray bottle by my bed tonight to squirt Potter with when he wakes me up. My therapist suggested it. It's the only time she's encouraged me towards violence.

"Fight torture with torture;" not usually my motto. But when Satan's Little Helper's little buddy gets a bad rap from the therapist, drastic measures must be taken.
at 10:10 PM

I also now have a water pistol next to my bed for the same reason. Kitties are not allowed in our bedroom, but they have taken to standing outside and meowing and scratching the door all night. Last night was the first night with the pistol and they didn't wake me up. My hubby says animals can't learn from threats they haven't experienced, so we'll see.

indeed, put those terrors out. can you close them in the guest room? Are you confident they won't protest-spray?

Cats are total diva bitches, but we love them for it, right? Rosie use to pound - literally - on our bedroom door. She wasn't hungry and didn't want anything. Just attention.

you need a dog. as long as you don't look them in the eye, they will get the point in the middle of the night and decide to sleep until you wake up.

Ann, that's why we have what we dubbed "the cat room" (ie our laundry room) across the house where the cats have their own special beds. And our sleep became much less interrupted by cats licking eyelids, biting elbows, swinging pictures on the wall, pushing things off counters, banging doors back and forth, jumping on the door handle, biting dresser knobs, etc etc. Then we went and ruined peaceful slumber and had a baby who woke us up all hours of the night for things. If I could only squirt Bella with a water gun when she wakes me up, I'd be golden. Haha. You know I'm just kidding. :o)

Humph. I told you the EXACT same thing like a year ago when I stayed at your house while you were out of town. ALL your animals sleep-tortured us. I told you that is why you never have any energy and why it takes you so damn long to wake up.

Maybe next time, I will charge you a session fee for it and then you will believe me.

:) (If I end with a smiley face, it means you will still love me, right?