We entered Guatemala and checked into a hotel with wi-fi. Thank God. Finally, a chance to reconnect with civilization. I hadn't been on Facebook in three days; I only checked my email for a few minutes on a friend's computer I borrowed. My phone had no service.

I snuggled under the down comforter on one of two queen sized beds in my room. Fourteen pillows for one person seemed excessive, but as I was the only woman on the trip, I didn't have to share!

The next day we would wake up, go visit a ministry of a woman who helped organize the trip and then off to Antigua to sight-see.

Truth be told, I wasn't too hip on going to visit the Tabitha House. We'd been conferencing with pastors in Guatemala for two days straight. Hours upon hours of church talk. I was exhausted, the other pastor's seemed to be wearing down too and quite frankly too much God-talk can make one resent God. Or at least the one talking.

But Carol was nice and I wanted to seem supportive of her (she was the only other actively ministering woman on the trip - i.e. she ran her own ministry instead of being the wife of someone in the ministry).

Edwin, our driver, picked us up at the hotel (30 minutes late, of course), and we began the drive to the Tabitha House. "There's the aqua duct that the Mayans built. Of course, we don't use it now."

"Of course, right." The boys had let me have the front seat either out of chivalry or because I get carsick. Their motives could have been mixed.

"Aw man! I could have gone to the zoo today?!" I lamented not having received this information earlier so I could have taxied to the zoo and return by the half-an-hour later leave time we had scheduled.

And then the traffic died down and the streets got smaller and we turned onto roads more like alleys than anything. Lined with vendors selling fruits and deodorant and scarves. All things colorful and Guatemalan. And then we approached the dump. It had a huge fence around it. And there were areas of the fence that were black where they'd been burning things. Then outside lining the walls of the dump or across the street were vendors who had recovered things from the dump and were reselling them. There were trucks, like good Texans drive, except twenty years older and white with rust on them piled high with bags of trash or recycling. Like in America, where we save our coke cans to give to the janitor of the church where we're employed, if you can dig through the trash and pick out the right things, you can make a little extra money. 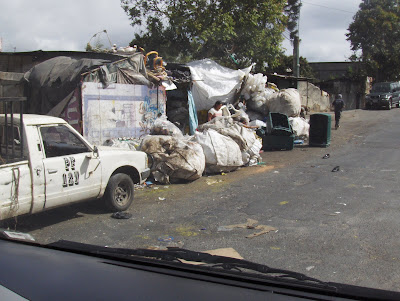 Except for these people it's their only income.

They live across from the dump and you could see the shanties were just scraps of metal leaned up against each other like card house only not as precise or angular.

The dump is situated on top of a marsh. Unstable ground. It's fine for an adult. But for the women and men who go out there with their infants or kids, it can be a dangerous place. Trash piles shift, grounds are sludge, and children, well, they sink.

And that's just one reason why Tabitha House exists.

We walked up to the conspicuous un-labeled door and Edwin knocked. The silent woman slid back the peep box and upon seeing us, opened the door. About twenty kids were seated around small kid tables. "Bienvenidos!" They said in unison. We must have been a sight to behold. I affectionately called our group, "Three Giants and a Ginger." The three men I travelled with were all over six feet tall and this in a county where I at five foot one towered over the people. As we further ventured into the room, the teacher (was she the teacher?) didn't say anything, but sat in a chair next to a bookshelf of papers and crayons. One child got up and came to me, throwing his arms around my legs. At that, several of the kids lept to their feet and began hugging and jumping on the men I was with. They were live living jungle gyms to these kids who I discovered didn't leave this 10x40 foot room. One child next to me had already unzipped my purse and pulled out my camera. Wow. Okay sweetheart, give it back! We left Esteban, our translator, with the children on that floor and ventured upstairs. I felt cramped on the cement staircase. And while I didn't have to turn my shoulders to get up it, I could have. It was very narrow. At the top of the stairs we found another room, much smaller, with two tables and about 10 two and three year olds sitting silently at it. One child ran into the bathroom behind it upon seeing us (children here are taught to fear photographers as they often kidnap children). We doted over them briefly while they stared at us and then went up another staircase to the four and five year old room. These little darlings demanded to be held and studied my bracelets and earrings (I had overdressed for this part of the day) as their snotty noses dripped tangled in my hair. 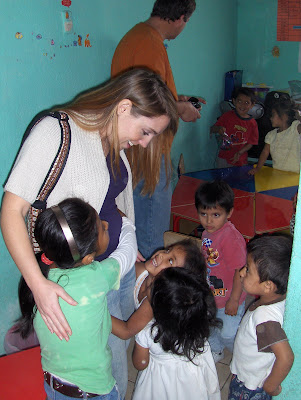 The Tabitha House houses only sixty children (used to hold 80, but they were low on funding and had to cut back) whose mothers are prostitutes, drug-addicts or just plain poor. While the mothers go out to look for work, or dig in the dump (remember the children can be lost in the dump), Four or five women oversee sixty children who often haven't eaten since the last time they were at Tabitha house.

Most of the children are sexually abused by strung out parents or guardians. Carol describes changing diapers and finding blood everywhere. The abuser often holds glue to the child's nose so they don't know what's happening and, high themselves, neither do they realize what they are doing. One little boy (oddly enough, named Jesus) attached three of the four men with us, boxing them in the groin before climbing onto their backs. "It's his only defense against men," Carol explained. "He expects men to hurt him so he keeps them away pre-emptively. And he's actually much better now. When we first got him, he was uncontrollable." Jesus now lives with a couple who care for eleven children... six of their own and five foster. When Jesus arrived at Tabitha house, they found a hole in his skull where he'd been beaten. They got him medical treatment, but his relatives (guardians) were selling the medicine for money. Jesus never got better and after figuring out why, Tabitha House got him in with the amazing couple that now cares for him and ten other children they call their own. 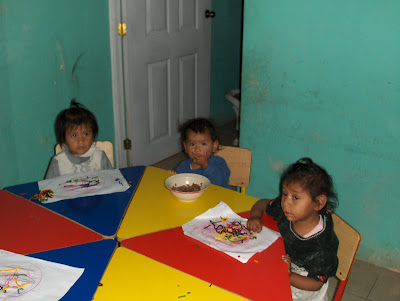 When "Maria" (I don't know her real name) arrived at Tabitha House, Carol discovered her toes had been eaten off by rats. In the shanties, the rats are huge and children and adults often have to fight the rats for food. When they took her to the doctor, they said she'd never walk. She now runs.

Tabitha House has limited resources, but it uses them well. One or two of the women who watch the children in the house are mothers who originally dropped their kids off at Tabitha House, but have now broken the cycle of poverty, drugs and abuse and are on their way out, or at least up. You see, Tabitha House works with the mothers too - getting them proper documentation for themselves and their children, so they can apply for jobs, have rights. They teach the women life skills - how to cook and sew. And now, the garments the women make are sold for a profit that goes into Tabitha House funds.

And many of the women are changed. They get out of prostitution, off drugs. "But we don't save them," Carol is careful to note. "Only God can change them."

As we pried our legs and arms free from the children (we had returned to the first floor to find Esteban covered in kids), we returned to the car and I longed to wash my hands. Leave it to me to see all that poverty and abuse and wants to wash my hands of it. But the disease the children are exposed to... it is awful. Where they live there are no bathrooms, no showers. 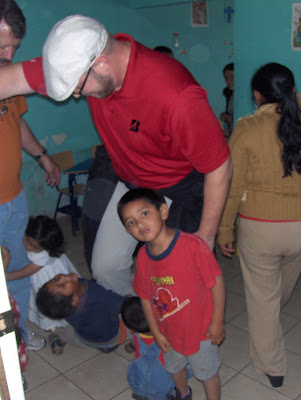 We spent three hours that night after returning from an afternoon of shopping, eating and cathedral-ruin-visiting in Antigua speaking with Carol about Tabitha House. Her fiance and son were with her. And with wide eyes her husband, a neurologist, confessed, "She's a powerful woman. I just watch."

And she is. Imagine what she is up against. Not only the poverty and violence of the streets, but even "missionaries" who have come to help have used her. She spoke of three "missionaries" who raised funds among parishioners in American churches for "the work they were doing at the Tabitha House," but when someone came to visit them and see their ministry Carol had to reply, "I don't know who you're talking about. They don't work here!" And within her denomination (Baptist) they've already had to make cut-backs. They used to feed and help over 80 kids. So many children need help, but to the ones she is given, Carol applies the most gentle care. She uses the resources she has to provide for the children, help the mothers, and allows God to do the rest. "Only God can change people, I cannot," she shakes her head and raises her eyebrows at the misery of the world and the mystery of God.

I raise my eyebrows at her.

I've found a new place to give my tithe during my time off from the local church right now. And if you want to give to Tabitha House as well (and ensure that the funds arrive there!), I can make that happen. You have my word. And so do Jesus and Maria. Two of the pastors I travelled with will be returning next money. Money can be donated through their organizations (tax-deductible) and will go straight to the hands of Carol at Tabitha House. Last time, they brought shoes for the children as well, which was a huge help. But money can go straight to the budget which Carol can use for snacks, supplies, sewing materials, whatever.

Thanks be to God for Carol and for Tabitha House. And may I never take for granted a hotel room or a shower or food in a fridge again.
at 3:35 PM