Life wastes itself while we are preparing to live. – Ralph Waldo Emerson

If you had one week left to live, would you still be doing what you’re doing now? In what areas of your life are you preparing to live? Take them off your To Do list and add them to a To Stop list. Resolve to only do what makes you come alive.

Bonus: How can your goals improve the present and not keep you in a perpetual “always something better” spiral?

Part of agreeing to write for Trust30 includes receiving "prompts" from other "Authors" across America. I'm starting to figure out that most of these prompts are written for, I don't know, secretaries who are secretly super talented and are wasting away their ability to translate some African dialect into English so that some remote tribe can communicate with the rest of the world that their water is polluted and can someone please bus in some filters or something? without which this tribe would surely perish and thank God that secretary realized her true abilities and stepped up to bat to recognize her gifts and share them with the world.

Obviously I'm not a fan of the prompts. They make me feel like I'm at in High School or at a self-help seminar. Office Space explains it best... 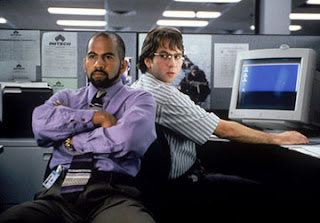 [Peter, Michael, and Samir are chatting as they hang around the printer]

Peter: Our high school guidance counselor used to ask us what you'd do if you had a million dollars and you didn't have to work. And invariably what you'd say was supposed to be your career. So, if you wanted to fix old cars then you're supposed to be an auto mechanic.

Samir: So what did you say?

Peter: I never had an answer. I guess that's why I'm working at Initech.

Michael: No, you're working at Initech because that question is bullshit to begin with. If everyone listened to her, there'd be no janitors, because no one would clean shit up if they had a million dollars.

Samir: You know what I would do if I had a million dollars? I would invest half of it in low risk mutual funds and then take the other half over to my friend Asadulah who works in securities...

Michael: Samir, you're missing the point. The point of the exercise is that you're supposed to figure out what you would want to do if... [printer starts beeping] "PC Load Letter"? What the f*ck does that mean? 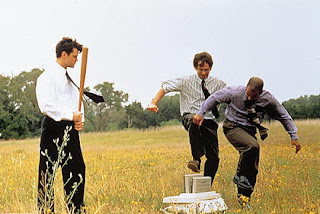 I took this writing challenge as a discipline to write daily and write about stuff and stories that are buzzing around in my head that I'm not taking time to write out properly on paper. So I haven’t been following the prompts. But quite frankly, if I had one week left to live, as today’s prompt suggests, I wouldn't sit down at my computer and write those stories out then either.

I actually hate this question. I get what it's meant to achieve. But what I would do if I had one week left to live is consume. Consume, consume, consume. And give, I'd do lots of giving too.

First off, I'd eat out for every single meal, because if I've got one week to live, then I've got money to eat with and I'm not eating one more Amy's organic gluten free pot pie if I've got one week left. The alternative is eating at friend's houses which is okay too. I'd eat at Chris and Michelle's and have Johnson cook some of my favorite meals of his... one of his soups, or his salads, or fish tacos. Point being, I'd eat good food. And I wouldn't worry about calories. I'd have dessert at every meal. And I wouldn't worry about what will clog up my arteries and what's damaging my liver. I'd consume and I'd enjoy it. Mimosas for breakfast, Bloody Marys for lunch, Grapefruit Martinis for dinner and beer on the porch later that night.

Secondly, I'd spend time only with people I love who give me energy. Unfortunately the list is so long of people I'd want to see in that last week, it wouldn't all get done. And that would suck. So I guess in that last week I'd have to double my Pristiq prescription so I wouldn't get sad that I couldn't fit in everyone I love, I couldn't see them one more time or hug them or jump up and down that I'm so happy they're my friend.

If I had a boyfriend, he'd stay at my house every night and we'd go to bed holding hands and we'd wake up holding hands and he'd sleep on the couch for the night I have the girls over for one last slumber party which would happen several nights since there's several groups of girls over the years that I'd want "one last girls' night" with.

I guess, to go back, I'd spend the first morning getting everything ready, for when I was gone, I mean. I've already got all my passwords to all my accounts written in one place and I've already got a will (I'm a little OCD and tend to obsess over death more than most people anyway). But I'd write out my funeral, how I'd want it to be. How there would be NO HYMNS to be sung at it and how the pastor to officiate must please, for the love of God, not use any male pronouns to refer to the Holy One. Of course, this prompt didn't suggest that I would die after than one week and live would go on without me, but if it's everybody's last week too then that would just cause a serious clusterfuck, so let's just assume it's only my last week and move on. I'd show my parents or my sister or maybe Lynnette or Kate Spencer where all my writings are. Where the journals and sermons and hidden blogs are all located just in case someone wanted to finish all those documents titled: My Book and Book # 2 and The New Book that I have scattered around on my computer, honest attempts at making a difference and doing what maybe I'm called to do, but half-heartedly stored away because they weren't good enough, weren't smart enough, and nobody likes me that much anyway.

And I'd bequeath my stuff. The important stuff. Who gets what work of art and which charity I would prefer to get my clothes, shoes, couches, car, electronics, etc. And I guess this would have to extend over into the last day too because after I've eaten out for every meal for a week and bought plane tickets to Missouri and back, I'd have to assess how much money was left and either write checks to the charities I most value or jot down how much each one gets so my parents can figure that out when I'm gone.

But other than that morning of organization, and other than eating delicious food for every meal, I'd just want to be with the people I love. I'd probably ask Hollywood if I could get a sneak peak of the final Harry Potter movie so I can know how it ends. And I might watch Moulin Rouge one last time, or if that feels too sad for my last week, maybe Little Miss Sunshine or Into the Woods (but only if my sister was there). I'd go dancing at Gruene Hall or the Spoke, but I'd rent the place out so that the bouncer that I put at the door says who gets in and who doesn't so all those schmarmy dancers aren't allowed in and to regulate how crowded the dance floor gets. I mean, Cinda and I need room to dance, people!

I guess there is one thing I'd do that only I can do. I'd get my friend Stephen or maybe if there's no limits on this last week, some legit recording studio in Nashville or New York to record me singing songs from musicals I've done in the past. "Honey Bun" from South Pacific, "Last Midnight" from Into the Woods, "I Don't Know How To Love Him" from Jesus Christ Superstar, "I'll Tell You What I Think of Him" from King and I - though, maybe not, cause I hated that show, "Pharoah Story" from Joseph, "Soon It's Gonna Rain" from The Fantasticks and I'd get Justin to sing the Matt part, and then maybe a song from the shows I did where I didn't have the lead or shows I did as a kid, or in High School like "Happily Ever After" from Once Upon a Mattress, "Shoeless Joe" from Damn Yankees (both characters I played in High School), "If Ever I Would Leave You" from Camelot (Amy and I were in the chorus of this when my dad directed it - God, that was a fun summer), "The Color Purple" from The Color Purple because I sang that several times at FBC and my mother heard it and loved it, and so did the church, especially Jeanie Spencer. And just because I love the songs, I'd probably do "Defying Gravity" from Wicked, "I Am What I Am" from La Cage Aux Folles, "Rain on My Parade" from Funny Girl, "Maybe This Time" from Cabaret, and of course, the song I've been singing on stages and in showers since I was a little girl, "On My Own" from Les Miserables. And I don't know if my family would want to have this CD. I'd make it with my dad in mind, since he directed the first musicals I was in as an adult, but he may not be into that, I don't know. I know Amy would listen to it though, and she'd burn Brent a copy, so at least two people would have a little something I left behind.

But other than that, I'd eat and drink, and watch the final Harry Potter, be with the people I love and allot my remaining few dollars to charity.

I'm with you on hating this question and I love the fact both of us related it the "if you had a million dollars" guidance councilor question.

I am so with you about that because my first thought has always been, "if I had a week left to live, I'd quit my crappy job and eat what I wanted."

If it were my last week I'd call BOTH of my sisters at least once and then I'd call my Dad and explain to him why I don't know whether he would want a copy of the CD of me singing my favorite songs. Because he would definitely want those tunes on his IPOD, and would be sad if he knew you thought he didn't care.