My Adriatic Tour Part One: Rome

My mother's full-time job for 30 years was to teach Latin (and French), so you can probably imagine what it was like at home. Occasionally our bedtime stories included books with images of Greco-Roman gods and stories of valor and indiscretion. In the summertime, (when my mother wasn't drowning amidst the teenagers at work and three flamboyant daughters at home), Tuesday was fun day, so once a week she would take us to a museum or art show, or whatever was culturally beautiful and educational all at once (there is the obvious exception of World's of Fun - but I attribute those excursions to my grandparents anyway).
But all the books and museums in the world couldn't prepare me for what I saw in Rome... the Colosseum (built just 2-4 years after the fall of the Jerusalem Temple) with its cages for wild animals and men alike... the remarkably preserved Roman ruins sprinkled throughout the city - columns, floors, temples ... the Pantheon with its remarkable gold dome - architectural genius... and Saint Peter's Basilica which borrowed gold from the Pantheon for its own remarkable decorations. 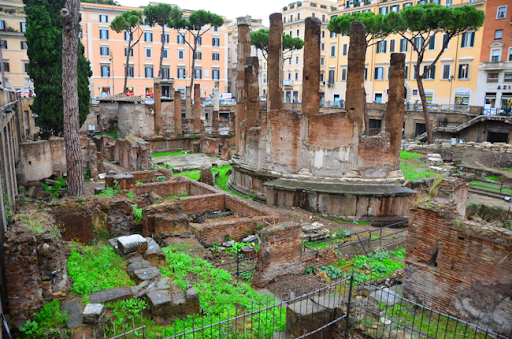 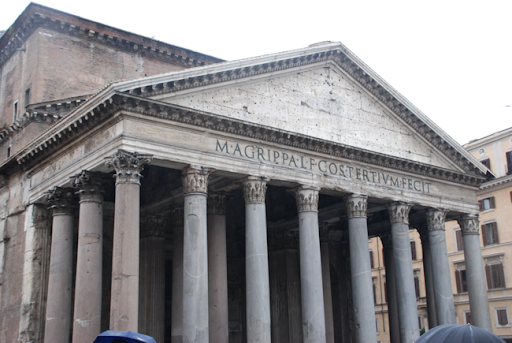 Now, these last two have moved us out of Ancient Rome and into the papal period, but their affection for the arts and architecture remains un-wavered. When my Person and I arrived at St. Peter's Square in the Vatican it was full of people anxiously awaiting the pope's blessing. And sure enough, at noon he appeared from a tiny window to offer a homily and blessing I couldn't understand, but it was awesome. Although I'm not Catholic, I love this new pope and felt honored to hear him speak.

I'm digressing, so back to the sights.  After receiving our free rosaries from Pope Francisco, we joined in line to tour St. Peter's Basilica.

My Person and I walked inside the cathedral from which all cathedrals take their measurements (none shall be larger), and as my face turned upward, my jaw fell down. I was struck speechless. The awe of this magnificent church is beyond description. My hand moved to my chest as I held my breath and walked around, not taking pictures, not talking, just looking. From floor to ceiling, nothing escaped the eye of the artists or architects. Of course Michelangelo's Pieta is there - Christ's dead, limp body held by his mother, and caressed with the Madonna's peacefully ironic eyes.  And there is the monument(?) over where Peter the disciple is supposed to be buried. And there are the pope's tombs and frescos and more fat little cherub angels than you could possible count.  All layered in gold and black but with sunlight streaming in from the high windows. After the initial shock wore off, I did grab a picture of a few things, but for the most part, I must defer to my Person's camera for the cementing of Vatican memories.

Despite all these magnificent sites, the ancient Romans were a pretty wicked people.  From the sporting of gladiators to the oppression of the Jews to the gruesome persecution of Christians, their culture was dominated by violence, despite the glory of their architecture.  The same could of course be said of the early Pope's too though. While my person snapped a picture of the gorgeous sculpture over the Borgia pope, I turned my head away in disgust, and reveled instead in the stories of popes who praised the arts, humanities, and science. And now we have a pope who praises the poor, refusing to live in the extravagant papal room, but rather in a more humbler part of the palace.

I take all this with a grain of salt. Sorry, Catholics, but your pope's are people too, as are your cardinals and priests. Your history is filled with unjustified war, scandalous sex,    and abusive financial frivolity. I should know, I'm a Baptist minister, and we are all too familiar with committing abominable acts in the name of God. While the sentiment, "popes are people too" doesn't excuse their behavior. It does hopefully illustrate Jesus' warnings about "the love of money," and Machiavelli's assertion that power corrupts, absolutely.
All ministers and priests and people who act on behalf of God would do well to remember this. And we would do well to triumph the act of storytelling through art and architecture, looking to the Romans and Catholics as great examples of faith made beautiful.

What I'm trying to say is, you can't imagine the history preserved in Rome alone. Every time my Person and I turned a corner, "whoa," or "oh my gosh" or "wow" escaped from our lips who disbelieved our eyes. There are gorgeous churches scattered throughout the tiny streets most of whose elegance doesn't even grace our guide maps. They're not St. Peter's or Santa Maria's, they don't house popes or queens or famous painters, just priests and martyrs. It's unbelievable that their majesty doesn't even make it on the map, but you have to understand there's just so much to see in Rome. We arrived on the 14th and left on the 18th, and those 3.5 days were not enough, I still have a list a mile long of what I want to see in Rome (for the love of God, I haven't even made it to the Sistine Chapel! - it's closed on Sundays when the Pope is in residence. Thanks for cueing us into that one guide books - grr). And I'm thankful we'll have one more sightseeing day in Rome after disembarking from our cruise in two weeks.

Until then, more marvels await us... The David, Pompeii, Diocletian's Palace, the Justinian mosaics... and I still need to ride in a gondola. Until then, seize the day. Seize every single ancient or contemporary day. Because our books and imaginations can't even come close to the real thing.