And Then I Moved to Colorado

I spent my birthday with strangers this year and it was one of the most exciting days of my life.

Not because anyone knew it was my birthday (or because anyone even knew me). Not because I moved into the triangle shaped upstairs of a house chock full of Harry Potter holes (small doors that monsters and bad guys could easily crawl out of - terrifying!). Not because I ate a delicious, gluten-filled brownie my roommate made because she likes to bake. Not because my other roommate had a long haired chiguagua with whom I knew I would become best friends. Not because I watched my first full Game of Thrones (which I hate) episode in an attempt to make human friends.

Not even because of all those reasons.

Rather, it was one of the more momentous days of my life because I moved to Creede, Colorado to take a new job with a repertory theatre.
On my thirty-sixth birthday.

Life never ceases to surprise me, and sometime I wonder if every day doesn't offer its own little opportunity for rebirth. There are baby birds hidden away by their mother in a nest in a crevice in our roof right now; they chirp away every morning, and I too feel like a wet little winged friend blinking at the world.

Whoever tells you its too late to start a second career, or too risky to move to a new place, (or that you're too old to play an ingenue), tell them I say to shut it.

Or just tell them I think every day is an opportunity for rebirth.

The church may say it happens after gruesome capital punishment (sorry Jesus!). Alanis Morissette may think it comes after a horrible breakup. But I believe it arrives every day with the rise of the sun.

On May 18th, when the sun rose, I left Lubbock (only a car-bound layover, thank God), and eight and a half hours later, I pulled into Creede, Colorado.

Reborn and shivering... spat out on new terrain.

You guys, it's gorgeous here. GORGEOUS. And remote (my cell phone doesn't always work), and I drive past running water every day, and wake up to snow-capped mountains and green hills and jagged cliffs and wild animals.
Oh the animals! On my first evening in Creede, I saw 5 deer, a bunch of jackrabbits (they're big!), 2 beavers (badgers?!), and of course my roommate's chiguagua. And in the weeks since then, I've had a mountain goat mama and her baby jump down a mountain (in front of my car - brakes slammed, goats saved), and elk, and magpies, and oh golly... so many fuzzy, feathery wonders.

Speaking of wonders - the stars. When I left the Game-of-Thrones-brownie-distrubution-event that first evening (the night I spent my birthday with strangers), I stepped outside to drive back to my allocated housing and gasped. The stars. You can see them all. And when the moon shines, you can see your shadow. It's that dark here. And also that well-lit. But naturally. It's just nature, and it'll make you gasp.

And while I live a ten minute drive outside of it, the town of Creede proper is adorable. Super small, but very friendly. My Person and I hosted a BBQ at our house tonight for the theatre company. The grocery store owner not only gave us a huge discount last week on the meat, but when he saw us in town a few days later, he asked if we'd located a grill yet, and offered us the grocery store's giant grill in case we needed it. And when a local restaurant owner heard us talk about the BBQ while at dinner, he offered us his grill as well. "That's just Creede," everyone says when I tell them the story. Plus the town has two great coffee shops, a hardware store (Person is happy), five restaurants, one bar, a ranger station, two places you can get your haircut, and a theatre... which is the town's main attraction. 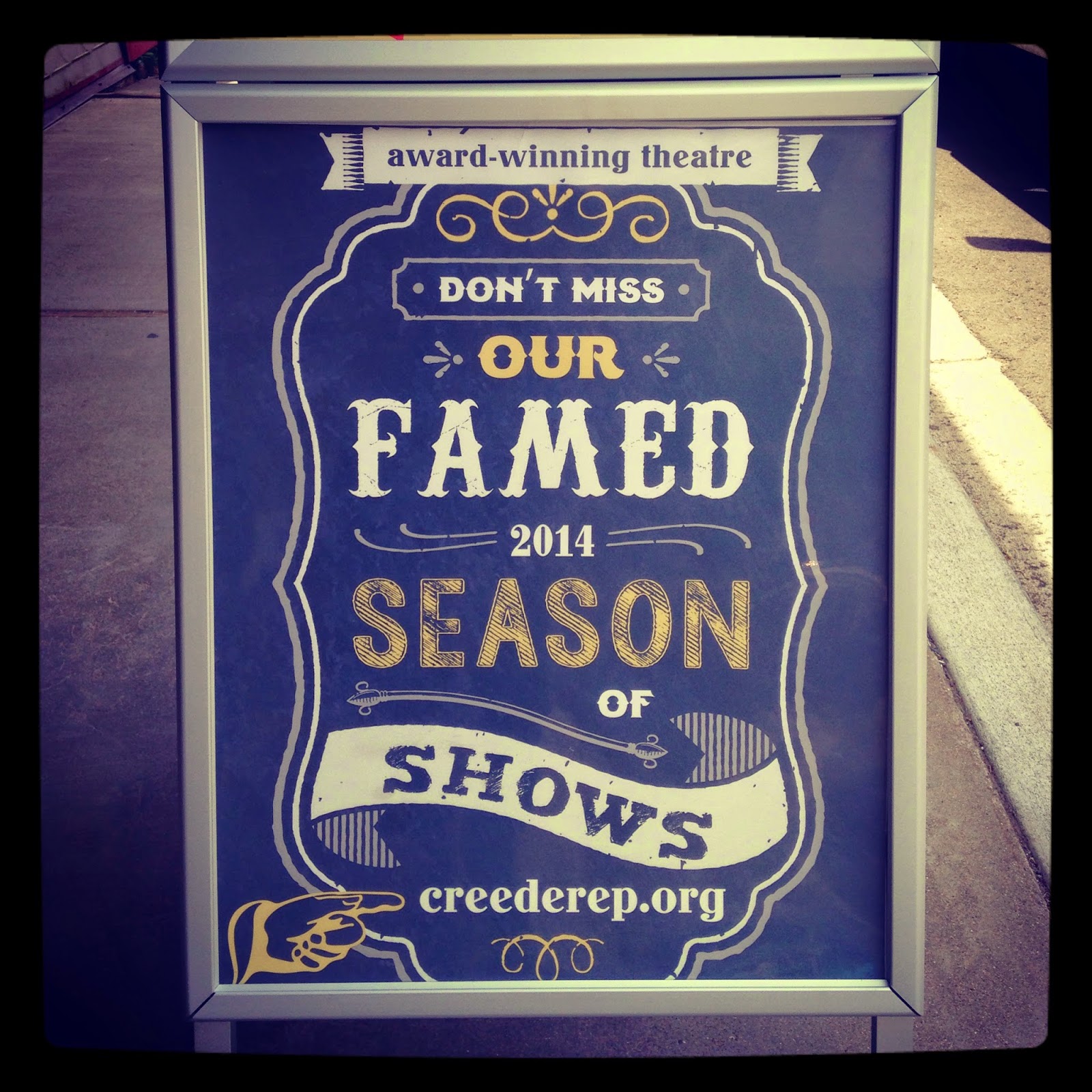 It certainly was to me.

Eight months ago, Person and I started looking for places to spend the 2014 summer. We had two criteria: it had to be somewhere beautiful (his stipulation), and it had to have a reputable theatre (my requirement). After driving all around Colorado last September, my friends the Joneses suggested Creede. They bought us tickets to see some Shakespeare zombie apocalypse play, and the four of us made the (beautiful) drive through the sometimes icy snow from their cabin near Pagosa Springs to Creede Repertory Theatre.

New scripts can be sketchy. Zombie plays can be disastrous. But this one was ridiculously delightful, even poignant at times, and contained blood cannons.

"This is somewhere I can work," I thought.

And that's how I chose Creede.

How did it choose me? Well, it was a montage of audition videos, email exchanges, a great conversation at Kips, and... well... their ingenue dropped out. I signed the papers. No complaints on my end.

And I've got no complaints since I moved here either. The first day I called Person to report in on the experience. "These people are all really nice - like genuinely nice. There's not a pretentious person in the bunch."

This is unusual. We are thespians. We are in theatre. We are occasionally divas and full of ourselves. We can admit this. The egos are why my father got out of professional theatre forty years ago.

But these people are awesomepants. And healthy too. Orientation was great, and I actually thought to myself, "My therapist would approve." I can't decide if this is because the theatre is run mostly by women, or because it's run entirely by people under 40. Either way, I like 'em. They want to make good art as a community who works together. The second dresser is just as recognizable and well-loved as the star performer in the musical. It's a great model.

Plus, I pass a river every day on the way to work. And I'm not talking about the muddy Missouri river. I'm talking about a curvy, rapids filled river with beaver/badgers and a mountainous backdrop.

Did I mention the jackrabbits and stars?

And no one even had to wish me Happy Birthday to make it happen.
at 1:27 AM

Annie P, I haven't seen you in a play since HS, but you're making me want to make a trip to CO!

Hello, Ann! Mike Morrell asked me to contact you because he really appreciates your blog and thinks you'd be an excellent candidate for his Speakeasy Blogger Network. Do you like to review off-the-beaten path faith, spirituality, and culture books? Speakeasy puts interesting books in your hands at no charge to you. You only get books when you request them, and it's free to join. Sign up here, if you'd like: http://thespeakeasy.info