I had it all planned. Weeks prior, I had written Brownie & Christy (friends from CRT) explaining that during our seven months living in Creede, Colorado, it was Brownie's paintings that Person* was most enchanted by. Did they have a small one I could purchase to surprise him with at Christmas? For the person (indeed, my Person) who has everything, this was one thing I reckoned I could get him that would really surprise and delight him.
So Brownie took off to get one of his paintings from a gallery in a neighboring town to store at his house in Lawrence until I arrived on the 20th - en route to St. Jo Mo. Meanwhile, I started saving. Not having had steady employment since August, I knew Person wouldn't expect a gift from me, which made this extra special - sacrifice and beauty. Nothing beats it.
We arrived in Lawrence to hugs and a lovely fish dinner in an historic home. Christy and Brownie are lovers of history and their house is filled with it. Built in the 1800s it's gorgeous - tall ceilings, wood everything. It's amazing. And every inch is filled with something from an antique or thrift store. Wanna see what a POW built out of toothpicks while stuck in a cell during WWII? They've got it. Ever fancied a Celtic cross? - They've got a drawer full. It's like staying the night in a museum.
But Brown, Christy, and I had a game plan. So I slipped out to the barn-turn-gallery to "see Brownie's studio." He hurried to a brown box and pulled out the painting.

"It's based on a memory I have during my time in France," he explained. Even more perfect. It was The. Gift.

Person followed us in. Brownie hung my small painting next to a large one on the wall. Person began to peruse. "That one's wonderful," he said, pointing at the gift.
Oh god. Oh god. Ohgodohgodohgodohgod...
"Let's buy it."
"Oh, honey. Surely we should leave it here for Brown to use in his next showing. It's in Texas, you know. I'm sure he'll want to add it to the collection." I tried. I really did.
"We'll take it," Person said.
Brown looked at me. I rolled my eyes behind Person's back. Figures.
It absolutely figures.
"I think you really screwed up," Brownie whispered to Person as they boxed the painting and put it in our car.
"Did I ruin a surprise, Ann?" Person carefully asked me later, a hint of remorse in his voice.
"Yep, you just bought your Christmas Present," I spouted. And then a few tears slipped out.
Four hours later, and we were in Kansas City helping my sister decorate a room in a restaurant in preparations for my parents 45th Wedding Anniversary. Person and I had gone round and round about a gift for this special day, and finally determined that we would each contribute money towards 2 tickets, and ask them to join us for a week in France, lodging provided. It was a difficult decision because I know my dad doesn't really fancy traveling, but going to France with him is something my mom has always wanted.
Decision made, we planned the gift giving process. OMG. My parents are gonna flip. This is the gift. The. Gift.

In Austin, I'd purchased a guide book on France. Inside the book, we would include our financial gifts. In Lawrence Brown and Christy had taken us to the most famous bakery in America, so we bought them a bagette.
At my sister's apartment in KCMO, I asked for wrapping paper and began winding it around the baguette. Then I started making the "vouchers" for the tickets and hotel room. "Ugh, I screwed up. Can you cut me another piece of paper?" I asked Emily.

"Are you doing this to supplement Amy's gift?" she asked.

"Amy's present -   she bought them tickets to France to attend a cooking seminar."

I blinked. Probably twice. "What?" I asked. "I don't understand."

"Her present, for mom and dad. For their anniversary. She's taking them to France." Emily responded. "Are you piggy backing on her gift?"

Emily came in the bathroom. "Ann, it will be okay."

When I got out of the shower, I ran dripping but toweled to my purse. I took a Xanax. Don't judge. I made it three hours at least!

That night, at my parents celebratory dinner, I handed them the baguette, the guide book, and the vouchers. And said, "well, I didn't know Amy had already gotten you this... so, sorry?" and sat back down in my chair. 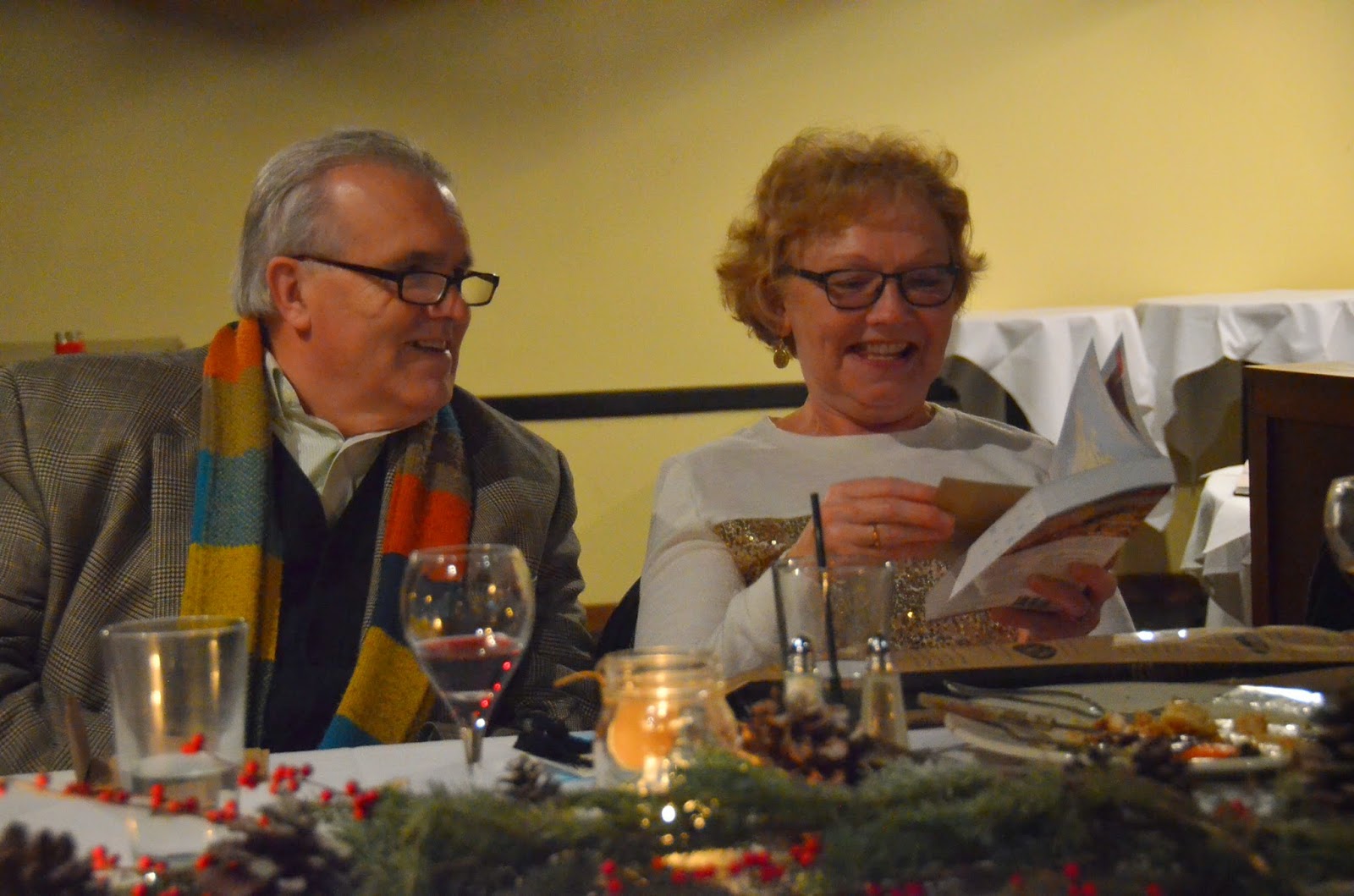 Four days later, and we were finally settled in for Christmas in St. Jo Mo. Person and I had to hurry out on Christmas Day in order to make back to Austin for Christmas with his family on the 26th. Emily was in a fuss - Christmas before Christmas - who's ever heard of that (um, any family who has to compromise?). So, on Christmas Eve, Person & I began distributing our gifts. Our family had gone with "elfster," this year but Person LOVES Christmas, so everyone had a gift under the tree from us despite the Elfster rules. And he'd been working on a "special" gift for my whole family. I knew what it was - a story based on Little Women, titled "Little Pittmens."

Each of us had a copy of the book he'd printed, and Person read it out loud as we followed along. "But when you reach page 17, you can't turn the page," he explained. Each daughter had a page dedicated to them in the book "interpreting" their story through Person's eyes. Stann (me), Amy (Haamy), Emily (Jemily), and even Andee (Candee). And my grandpa narrated it. My grandpa who passed away three years ago.

It was gorgeous. And touching. And sad. And happy. And we cried. We ugly cried. Especially on the page when Grandpa/Narrator talked about Grandma.

And then we got to page 17, and weren't allowed to turn the page.

Person kept reading. And stopped. And started crying. I tried to focus, but got confused. I looked at my mom, who looked back at me with eyes wide. I looked at my sisters, and Emily stared right back at me, nodding. Then I looked back at Person and tried to listen. I couldn't help but look at his pockets, and sure enough, there on the right side of his pajama pants was a bulge.

Oh my god. Is this happening?

"Stann, will you marry me?" Person said... dropped the book... and dropped to a knee. He pulled the box out of his pocket.

You guys, there was a ring in that box. Honest to God.

I hugged him and whispered quiet things in his ear. I said, "Oh my God" more times that I can count. And I said, "Oh Lord, what will Clarence say?!"

My grandma cried, and begged for someone to please ask her what is the best Christmas she ever had. Amy was completely shocked which interprets to "Oh my." Emily, it turns out, knew beforehand because while I was sobbing in her shower about my parents' anniversary gift, Person whipped out the ring, showed her, and told her everything would be fine. 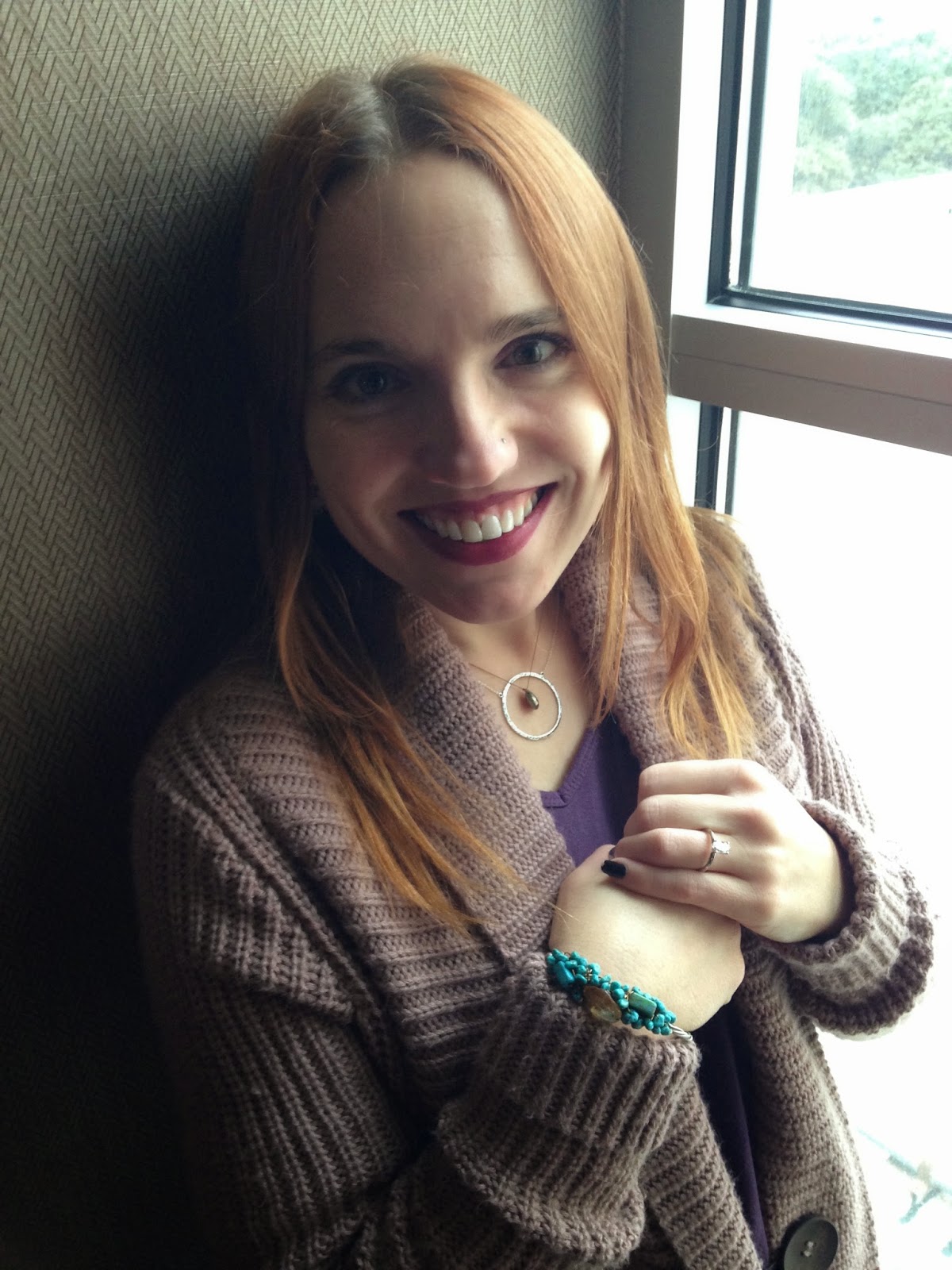 And suddenly, everything was fine.

It didn't matter. Because as it turned out. Someone gave me The. Gift. Not someone, but my Person. And since The. Gift. kind of changes everything, perhaps I can call my Person - scratch that - my Fiancee, by his real name. No more pseudonyms. No more labels. No more silly blogs about boys.

This is my boy. My Person. My fiancee.

After all that work, it turned out someone gave me The. Gift. And there was nothing I could do in response. Except say yes.

Which I finally remembered to do.

After my sisters reminded me.

"Did you even say yes?!" Emily asked.

Thank you for the gift.

*Explanation of the designation "Person" can be found here. Basically, we blame Grandma.
at 9:28 PM

Happy happy happy for you -- and for the TWO of you! MM

I'm so happy for you both. I wish you every happiness!