"Hollywood, come and get me Hollywood," floated through my head all day (kudos to whomever catches this movie reference.)

Yep, Hollywood bound we were. And after a twenty minute drive, we were there, walking the stars, sizing our hands and avoiding all the people dressed up like famous characters. (Zorro practically accosted me).

We went to the Graumann's Chinese Theater where lots of stars' hand prints and footprints and cigars (Woody Allen) and dreadlocks (Whoopi Goldberg) and even a pistol (I can't remember whose) are saved in cement. My favorite print of the day was of course Judy Garland who, alongside her daughter, was an amazing singer and actress. 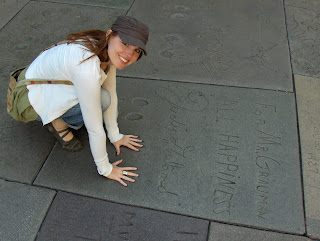 After we walked the block and mused at all the (literal) stars on the pavement with names etched in gold, (some real - Jeff Bridges and some not real - Mickey Mouse) and after I got startled after running into Samuel L. Jackson outside the house of wax (damn those statues look real) we decided to go back to the Movie Palace and actually watch a movie. We were in luck as Zombieland was just about to start, so we bought tickets and popcorn and took our seats. 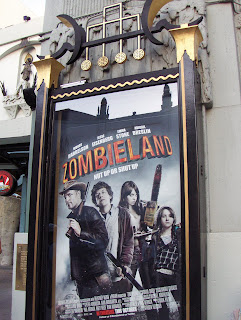 Unfortunately, it's October, which means it's almost Halloween. Now, you will rarely ever hear me say the words "unfortunately" and "Halloween" in the same sentence, but on this occasion, it meant that I had to watch the previews for the four scariest movies coming out around Halloween and since I hate horror and scary movies, this was traumatizing.

It did set us up for the gruesomeness that was the Zombies storming the beginning of the movie, Zombieland, but after the first twenty minutes when the plot finally became more character driven, I emerged from underneath my ball cap and actually was able to watch most of the film. It was hilarious and had an amazing cameo in the middle of it. Don't worry, I won't tell who and spoil it for you.

To end the day we ate at a diner where of course I had to order a chocolate malt. 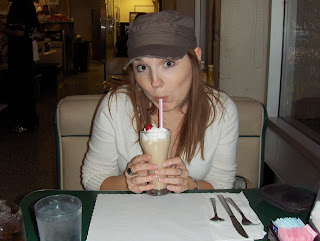 Yum! What a perfect ending to a perfect day. "In fact," I told my friend as we drove home, "I wouldn't mind moving out here to become a famous movie star."

I suppose I'll have to settle for being called beautiful by some black guy dressed up as Zorro outside a movie palace in Hollywood before he moved on to his next panhandling mission.

if you do move out there, Greg knows some Armenian mafia he used to rent a place from. It's near the Scientology compound.

Mannequin people. Mannequin, the movie. No one got the quote. Sigh.