It was cool. Don't get me wrong. But it was weird too.

Damn those monkey trails. I never want to see another monkey again.

Y'all seriously. And we finally determined that up in elevation was actually down on the map which was eventually helpful. But not before it was 2pm and we still hadn't found the restaurant we were trying to get to.

Despite the episode of Lost that we were apparently being filmed in anonymously, some of those animals were AWESOME.

For example, there was a POLAR BEAR. What? And he was playing in the pool when we rode the Bus (but not the Express Bus) around the zoo. So we stopped to watch a minute and he was hilarious tossing his ball around the water and splashing around. 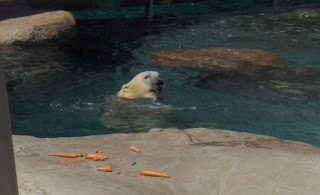 Unfortunately when we were viewing him later through the glass up close and personal, he was having some sort of personal problems He kept walking to the corner of a small covering like a hut, walking directly into the same right corner, then would take six steps backward diagonal left, swinging his head from side to side. Over and over he did this same movement. Like he had Tourette's or was performing a not so sacred rain dance. We stood there captivated though, watching the same thing over and over again because, well, he was a Polar Bear. And that was pretty amazing.

"Sorry we're destroying your habitat," I called out to him as we left.

And even better than the polar bear was the lion. And maybe it's because I'm reading through the Chronicles of Narnia right now so I'm a little biased in fondness for giant cats, but I checked with the others and they agreed, the Lion was the best. Because we were (maybe) ten feet away and he was sitting there chewing on a bone (a big one) like Sophie or Janie. It was amazing. 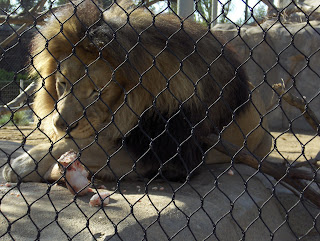 No wonder they're the kings of all the animals.

Other than that, there was a very cool flourescent yellow snake, some lame pandas whom the park totally talked up but who were actually in these small habitats sleeping in such positions that you couldn't even see their faces, and about a million bajillion deer of a thousand different varieties. "Probably to feed the lions," Amy determined.

So, back to the bus. The original bus, not the express mind you, although the express bus looks just like the tour bus only it has "Express" written on a green sign across the front of it. 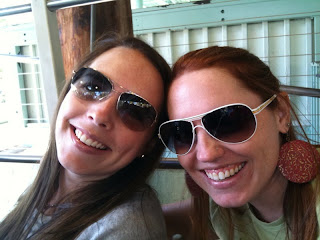 That became the butt of many jokes.

So at the end of the day, when we were tired, we decided to take the Express bus back to the entrance/exit of the park.

So we waited. And waited. And waited. And finally when I was about ready to pull my hair out (because the zoo was about to close and I hadn't bought my fuzzy stuffed animal yet), it showed up. Green sign and all. So we boarded, rode a few minutes and then it stopped. "Now this is Panda Canyon, and if you want to exit the zoo you go up the moving walkway, to the tower and take a right," the express bus driver announced.

So we got off. And you get one guess as to where we were. 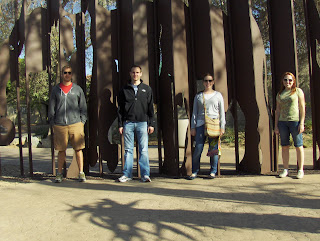 ...goodbye moon. Oh is that a mouse hiding in the shadows of the last picture.

Totally laughing at this post. As a San Diego resident, I know exactly what you're talking about...the monkey trails, the pandas, the walking! Been to that zoo a few times and every time I swear they've changed around the exhibits. They haven't, but that place is huge and the maps suck so it's like a new journey every time! Hope you enjoy the rest of your Cali trip!