And then I ran 5 miles

So the day my job ended, I flew to Disney World.

Some might find this to be frivolous, irresponsible, excessive, and I agree, except I didn't exactly have to pay for it. I traded in some miles and flew to Disney World for $25 (AA will charge you for everything including luggage, peanuts and trading in your miles). Once there I met one of my "other families," the family of the former Lynnette Ogle, now Lynnette Davidson. And the Davidsons love Disney. And by love, I mean lurve.

They are a little coo-coo.

And that's saying a lot on my end. I mean, I wore a Frankenstein hat while handing out candy to the trick or treaters tonight who were also able to listen to a sixty song Halloween music mix playing on the iPod I had hidden outside behind the bushes. I enjoy using my imagination. Disney is the place for me. But I've got nothing on the Davidsons.

They have a whole ROOM devoted in Disney in their parents' house.

So I arrived at the airport and with instructions from Luanne, the mom, or grandma (of Lindley) to head toward the Disney Express. No need to pick up my luggage, some "cast member" would grab it and usher it to my hotel for me. All I had to do was get off the plane, get in line for a bus, get on said bus, watch a movie about Disney World (my pleasure!) and then arrive at my hotel. The Boardwalk. Wow. Super cool hotel. On a Boardwalk. Need I say more?

Luanne greeted me and handed me my park pass card and my meal card (a drink, main course and dessert with every meal!) and a little plastic card holder to carry them in. Awesome. Her daughters arrived shortly after me. Much to their chagrin, I'm sure, they had to share a room with me, and thus share a bed with each other. (I got the couch).

And then the guest of honor arrived: Little Lindley.

Lindley is the protege of my aforementioned friend, Lynnette (two n's and two t's please) and her husband Sam. Sam's sisters, Molly and Maribeth, are the doting aunties who buy Lindley lots of useless but funny junk and are the two who would begrudgingly share a room with me, the newby.

And Lynnette's parents arrived too! It was a family reunion of the Davidsons, Ogles and... Pittmans! Something like that. But I got my "Family Reunion" button from the hotel desk anyway and wore it all weekend.

However, the point of this particular adventure to Disney World was not to celebrate my retirement from the ministry, but rather to race. Yes, the Davidsons are runners. Don't ask me why. I hate the very act. My sister ran a marathon and I printed off the pictures of her in the silver after-jacket, eating a banana and looking dead, and I put them in my scrapbook. I have no intention of EVER running a race myself.

But when Lynnette called me a few weeks before the trip and asked, "Luanne wants to know if you want to run the 5k," I was shocked.
"Run as in run?"
"Well, we'll be walking."
"I thought I was supposed to be watching Lindley during the race."
"Well, now my mom is."
"Um... I don't know... I've never run anything before."
"Come on Ann, even my dad is doing it." 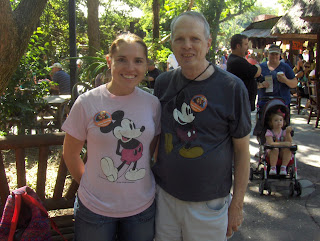 This is me pictured the first day at Disney World with said dad. Yes, we were wearing the same shirt. Ugh, Lynnette. Way to throw the way-older-than-me-person into the anty. Geez.
"Well, if he can do it surely I can..."
"Great. We'll sign you up."

So the next thing I know I'm signed up for the 5k. This however, was not the main attraction. Despite my world being TURNED UPSIDE DOWN by the thought of walking a 5k, Lindley's Diaper Dash was actually the main event.

You see, there were several brackets. (Is that what they call them in relays?) The 3-5 year old 100 yards run, the 1-2 year old 50 yard run, and the under-a-year-old 10 feet diaper dash. The babies were supposed to crawl. Lindley could only sit there. So with both sets of grandparents and two aunts, one auntie and her dad cheering her on, Lindley's mom lifted her and toddled her across the mat and to the finish line. We were thrilled and very proud. And Lindley was happy to have a new chew toy. 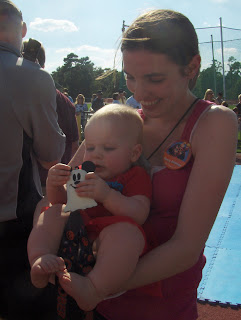 Our 5K began the next morning. And I have to admit, it was actually FUN! First of all it was like nighttime when we started. Observe the background in the picture of me and Lynnette: 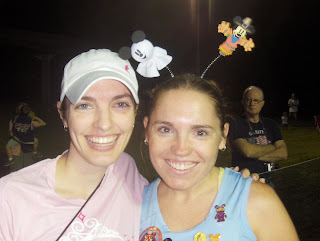 So it was cool and while I am NOT a morning person (almost to the degree that I am NOT a runner), there was something to the magic of that morning. When the fireworks went off and we began our face-paced walk, I was embarrassed to note that about 15 minutes into our trek through Disney's Magic Kingdom, the exuberant runners began PASSING us to head back to the finish line.

Well screw them, because do you know what was on the way throughout the park? Characters! Luanne and the others who were up ahead would text back to Sam, who travelled with iPhone in hand with me, Lynnette and her dad, which characters were coming up. At this point I would take off running with my camera to said picture spot, wait in line, have my picture taken, and then run back to catch up with Sam, Lynnette and Dad who had by then passed me. IT WAS AWESOME!!! I LOVED IT. And I got my picture taken with Cruella and Malificent. 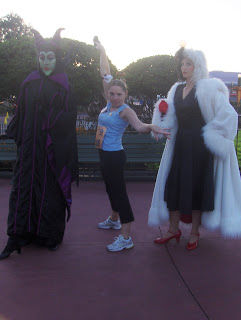 Of course, I struck a pose between them and Cruella gave me a look that would kill. Amazing. I was born for Disney World.

At the end of the 5k we all took a pic together and I felt invigorated. 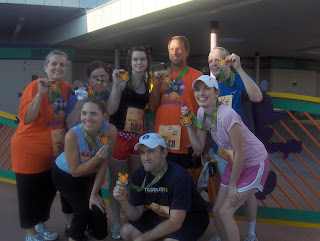 My first race! And I got a rubber medal just like Lindley!

Well, that night started another race. A serious race. Not some 5ker that sounds like a lot of miles but is really just 3. or something. There was a half marathon that would run from Animal Kingdom to Epcot. Of course, several of the Davidsons had signed up for this race as well. The exciting part about this race was that at the end you received a metal medallion, and at Epcot, the food and wine festival would be waiting for you!

Now, Sam, Lynnette, Molly and I had sampled the Food and Wine festival at Epcot earlier that day. And apart from being grossly disappointed with the downsizing of the champagne cups, 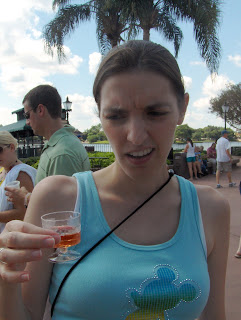 we were otherwise very pleased with our selections. So later that afternoon, when Sam announced that he wasn't interested in running his 5 miles of the 13 mile relay with his sister (who would run 8), before I could clap my hand over my mouth to stop the words coming out of it, I heard myself say, "I'll take your place."

"Great," he said. "Done. You'll be Sam. Molly signed me up as a female runner anyway, so it's perfect."

I quit my job, I went to Disney World, and after walking a 5K in the morning I was about to RUN FIVE MILES that night?

But I was stuck.

At 10pm, I found myself waiting in line for a bus with Molly and Luanne. Luanne, the wondermom, would run the 13 miles herself, whereas Molly and I would relay the 13 with 5 and 8 miles respectively. I began to get nervous. But after Luanne shared some of her goo with me (I have no other adequate word for this... it is literally goo that is packed with energy or something - I don't even know if this is possible - but it is happy goo in a little bag that you slurp up before or during your race), we were off.

And I had to pee.

So I left Luanne, running steadily along, and I made a beeline for the port-a-potty's. Gross. But I did my business and rejoined the race.

Without Luanne to distract me from this horrible mess I had gotten myself into, I turned to my iPod and Lady Gaga. And I began to sing. And not just "Paparazzi." "I'm Every Woman," "Love Shack," "Goodbye Earl," "Defying Gravity," and any other inspirational song I could find. Luanne later described me jogging past her singing, out loud, all by myself. But I don't care. At least I was running.

After all, Molly was waiting for me. And I couldn't wimp out. While I may have quit my job and submitted myself to a life of poverty, I couldn't let that affect my psyche. I needed motivation, not fear. And by God, I needed to finish that five miles.

It was hard. I'm not gonna lie to you. Grandmas were passing me. Old men with gimpy legs, were blazing past me. But with encouraging texts from my partner Molly, and a determination that I really could finish five miles if I just put my mind and legs to it, I ran.

And thought I was going to die.

And saw the 13 mile handicapped wheelers pass me on their loop back to the finish line.

And saw the 13 mile speed runners pass me on their loop back to the finish line.

And I cursed their existence. And texted Molly my hate for the world. And ran.

And when I reached Animal Kingdom, I found new vigor and I practically flew through saying hello to all the spots I love along the way: the safari ride, the theater where I saw Finding Nemo the musical, the restaurant we'd eaten at just the day before. And sure enough, I spotted Molly waiting for me at the non-baton-passing-mark (we actually had trackers attached to our shoes). And I slapped her hand and she took off and I stopped.

"Keep going honey," somebody hollered at me, and I realized Molly was waving me to come on as apparently we had to run 50 yards or so together. So I ran again, and then she went one way towards Epcot and I went the other towards... the bus. That would take me to Epcot. O God. I was done.

With my congratulatory bag full of shitty candy, gatorade and a banana, I sat on the pavement waiting for an empty bus to come get me and all the other slow runners. I munched on my food, marveled at my free food and drink vouchers for Epcot (they had to be worth $5 each!), tried not to throw up, and called my boyfriend.

I ran five miles. I quit my job, went to Disney World and ran five miles. "Who is this and what have you done with my friend, Ann?" a friend from seminary texted me. "I don't know," I wrote back.

But I'm off and running. Catch me if you can.

Loved the trip, love this post, love you - can't wait until next time!!