The Live Music Capital of the World

is where I live, and this week, I experienced it in full.

Starting last Friday night, a friend had invited me several weeks ago to attend a show with him at a Presbyterian church in North Austin. Some "amazing guitar player" was performing, and after driving in from Dallas, my friend wanted someone who would appreciate some good music to see the show with him. I was happy to oblige.

We were the first to arrive at the "Open Ear Concert," and with five minutes to show time and only six of us in the audience, I was beginning to worry about what I was about to see. However, the crowd filed in at the last minute and the opening act joined us onstage. All the rage in the Netherlands, Matt Harlan was indeed a talented musician with good lyrics and a compelling voice. But he was no match for the main event: Corrine West and Kelly Joe Phelps. 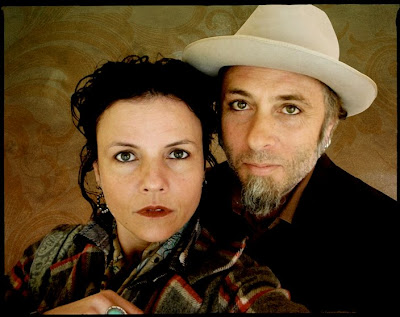 "She's not exactly delicate," my friend said of Corrine when I remarked that the photograph on the flyer (not the previous picture) made them look like a bad 80s hair band. And while he was right, she was no budding flower onstage, this beautiful woman was a powerful musician. With eyes clenched closed she listened to her partner, a former Jazz guitarist, shimmy his left hand up and down the fret of his guitar accompanying her on songs they had rewritten musically after meeting each other.

And they are a match made in heaven. Their voices blend so well that at times it was hard to tell who was singing which note. It was like listening to honey. Thick honey. The kind from the comb grandma would buy at the apple orchard and bring over to your kitchen. The kind you couldn't just drip onto a bowl of Cheerios from a bear, but the kind that had to be spread onto bread with a knife. Thick honey. My friend bought me their only CD together, and I was thrilled to learn that River was on it. However, the song that most affixed me was Angels. I've always heard of people describe music as a spiritual experience and while I've always agreed with that sentiment, for the first time as I listened to that song, I felt myself almost separate from my body as if my spirit were so moved to dance that it couldn't be confined to the mass that is me.

Find these people when they come to your area and buy a ticket to their show. Their CD doesn't do them justice.

From St. Andrews, I said goodbye to my friend (who headed back to Dallas), and went to meet up with some more friends downtown at the Beauty Bar to hear one of my favorite Austin band's last show. Upon arriving I discovered there was a $5 cover charge and free drinks at the bar until 11. What? Um, awesome. The B. Sterling Band was already playing when I arrived at 10:05 and I joined B's prego wife in the front of the crowd to hear the show. Always a ton of fun, I love listening to this band whose vivid lyrics coupled with not only your typical band instruments but a steel guitar, flute and trumpet too always make for a festive evening.

However, what was also making for a fun evening was the... ahem... variety... of people at the Beauty Bar that night. Go north on Punk Rock and take a right on Hipster are my directions for how to get to this bar, so when it began to fill with big hair and big boobed girls dressed in all black and pumped up in stiletto heels, I began to wonder if it had been too long since I'd been downtown. First off, I didn't know Side Bar had closed (which used to be right across the street), but now Beauty Bar is the main attraction for 30 year old sorority girls from Dallas? As I made my way to the bar (for a second drink), I discovered the non-sequitor... Cover Girls, the main band of the evening, indeed consisted of thirty-something year old women from Dallas but with a catch. "I'll take a vodka in grapefruit juice please." I began to pull a dollar out of my wallet to tip the bartenders. "No need to tip, honey," the old man standing next to me said. "But the drink was free and they need to make money," I replied pre-judging him as some jerk-off republican. "You know the band that's playing next?" he went on. I didn't. "Well, my daughter is friends with them. One of the girl's husbands is a trillionaire. Trust me, these bartenders will be taken care of. Save your money." Hmm. I complied. I don't have a full time job. I will save my dollar for an equally needy bartender. I returned to Jess and our friends reporting the news: one of the band member's husband is apparently a trillionaire and had flown not only the band, but all their friends into town, rented out the Beauty Bar, paid for our drinks, and made the whole evening possible.

I did not love the Cover Girls.

They couldn't even tune their own guitars. If the bad blond hair and the fake boobs and leather clothing hadn't tipped us off, this did. We were in for a ride. And I hate roller coasters. Five Six Seven Eight, the struck their first chords. We groaned. And then, as if in a bad karaoke bar, we watched some blond bimbo sing "One way... or another... I'm gonna gitcha, gitcha, gitcha." To add to the terrible song choice, and the terrible costumes, the song was in a key way too low for this girl and she didn't have a good voice. When they switched singers for the second song and bimbo number two began her equally terrible 1980s karaoke hit, I left. Money may buy you and your fifty closest friends a trip to Austin and free drinks for an entire bar and band equipment and even non-band members to tune your guitars, but it won't buy you talent.

I had shut this event out of my mind when to finalize my live music week, I and two friends attended John Pointer's show at Zach Scott Theater on the set of Rent and I was reminded of the full week of music I'd already experienced. But what a juxtaposition. This show finished out the week with the same flair that it had been ushered in with. A-mazing.

I admit, I'm a huge John Pointer fan. It's probably because he covers Yo Diggity (I'd like to bag it up!), but even beyond this super fun cover song, John's musical versatility is really unparalleled here in Austin. A human beatbox (yes, you heard me correctly), this cello performance major from UT plays, nay, dances on the fret of his guitar creating a whole new music experience all the while singing in that same whimsical fashion, sometimes gruff and hard, sometimes falsetto and sometimes, well, as though his voice were a turntable, snare and high hat. Trust me, it's hard to describe. But John captured his audience's attention and you could have heard a pin drop when he looped a simple guitar strum and then bounded from the main stage to upstage right on the second level where his cello, a saw (yes, a flimsy saw) and his bow were waiting. 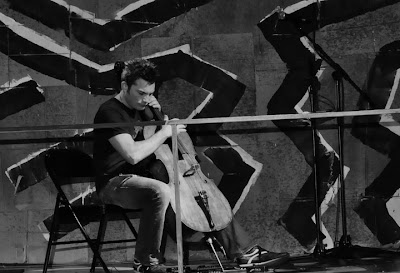 With those loops in place he returned to the stage, this time to the piano to play keys and finally add vocals to the mix. A good 15 minute spectacle, it was a real treat to watch. Because when John plays, he is also playing. He plays with the words, the music, the beat, the audience (yes, there's always much audience participation at John's shows) and the theatricality of each piece. It is a pleasure to watch him perform. 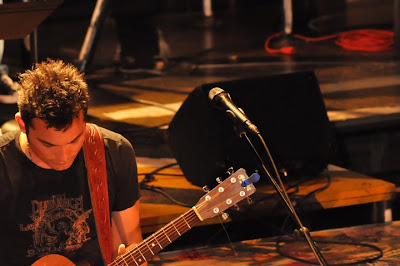 There was a summer or a fall or some season when every Thursday night you could hear John at Cedar Street, a local outdoor venue here in town. I miss those days of amazing live music - both originals and covers - and dancing to a cello and a human beatbox in downtown Austin under the stars.

Strange, I know. But birds of a feather flock together. And you need to hear John Pointer.

(Photography borrowed with permission from Charley McCoy).
at 10:33 PM

Email ThisBlogThis!Share to TwitterShare to FacebookShare to Pinterest
Labels: Music