I realize that I'm backtracking. But I've been backtracking for a while now, so you'll be alright.

The weekend after the big I Ran Five Miles at Disney World brought yet another adventure: Austin City Limits. Hooray! It's my super favorite weekend of the whole year.

Why? Because I love the sun, the music, the food, the people, and I love that it's all in one place. One park. One entrance and one exit.

My lineup for this year consisted of some bands I'd seen before, others I'd missed in years past at the festival and some I'd never seen or heard ever. Highlights from this year were... Blues Traveler (yep, it's true), The Black Keys (as everyone expected, a great show), Dawes (who I couldn't actually see, but sang along to in the back of the crowd on my blanket) and The National (Oh. My. God.).

However, for this post I do not want to focus on the amazingness of the aforementioned bands, but on the kookiness of several of the other shows we saw. One of the fun parts of ACL is that the selection of bands is usually vast enough that not only can you hang with the pot-smoking hippies at The XX, the Christians at Switchfoot (whom I avoided) but also with the voyeurs who show up to shows like M.I.A. and the Flaming Lips and by voyeurs, I mean those who aren't really music junkies for fill-in-the-blank-band, but just want to be able to say, "Yeah, I saw them once." We are voyeurs of the eccentricity of musicians.

I had skipped MIA several years ago at ACL when she was here to hear Damien Rice I think. A smart move on my part, but still I heard her show was amazing. So after picking up her CD that year, I was ready this year to make it over, and in 2010, several years and several CDs later, Maya had a much more featured hour and stage on which to perform. And boy did she perform. Too bad we couldn't hear her. Her stage was cah-razy with a video for the backdrop and pyro-technics on Paper Plane. 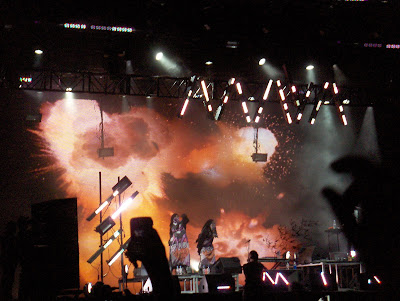 Super awesome. The crowd was wild with singing and fist-throwing. But we could hardly hear her vocals! You could hear the sound, but you couldn't understand her. Even in between songs when she spoke, no one knew what she was saying. So with that uber disappointment, my crew and I voted to leave the park early and beat the end-of-show crowds having heard our favorite MIA songs already. We left Maya on top of her speakers having climbed up there mid-song. 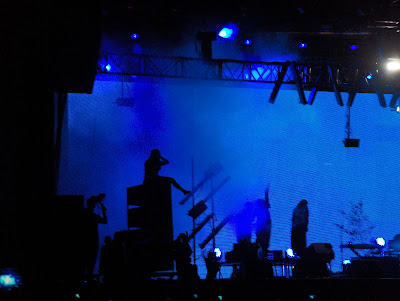 The other show that I'd chosen against in previous years was Flaming Lips. Supposedly their show was really entertaining a few years ago when I had gone to hear Robert Plant or someone else instead. I remember thinking at the time that I'd made the wrong decision, but after seeing their show this year, maybe not.

The Flaming Lips are known for being... well... different. I mean, I'm different. But they're different. For example, it would never occur to me to put a giant painting of a woman in birthing position on the giant screen behind my stage and then come onstage myself, get into a giant ball and roll from the stage (and thus from the woman) onto the people who had come to see my show and proceed to crowd surf in a giant blown up ball. 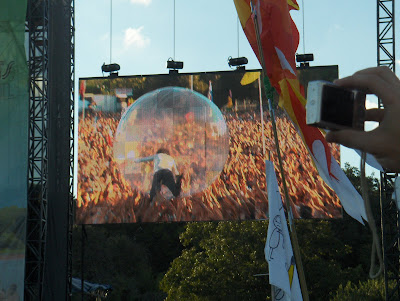 Neither would I consider it creatively advantageous to have a man in a bear costume come out onstage during one of my songs. Even if I did consider this, I would not then climb up on the bear's shoulders and ride him like a bull while continuing to perform. What the...? 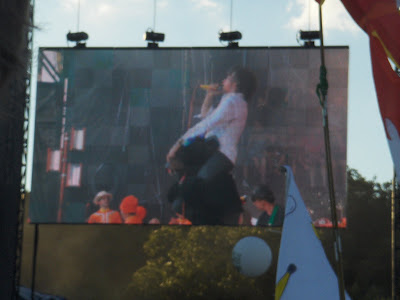 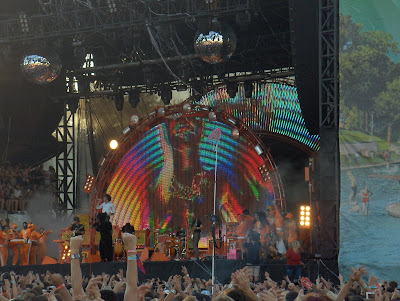 But even if I had chosen the theatrically precarious ball surfing or the just plain peculiar bear riding, I definitely wouldn't choose to ask my audience to do what Wayne Coyne instructed us in next. "Okay, if I say bird, I want to hear you chirp like birds." We all looked at him onstage like he was speaking alien. "F*cking chirp I said!" And a few people chirped. Then he called up his drummer to the microphone and said that he would willingly demonstrate and help us along. "If I say lion, I want to hear your roar!" Raaaahhhhrrr began the drummer and the potheads began roaring with him. The rest of us began looking at one another in disbelief. That's what i say to Chris and Michelle's 17 month old daughter, "Roar like a lion, Lauren," to which she replies, "rahr!" I digress. Then Wayne began performing the song, and with every noun he offered, we were to pretend to be that noun either vocally or physically. "Wind!" he shouted and people began blowing into the air and swooshing. It was like being in a high school theater class. Only worse. The sun was in our eyes, and most of us were high from either first or second-hand smoke. And our buzz was quickly wearing off. "Race car!" It was at this point that a wave of high schoolers weeded their way past us leaving the show. "See, they get it," I said to my ACL partner, Meredith Holladay. 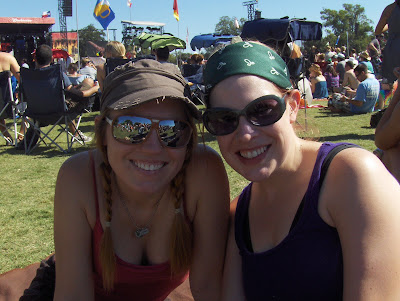 They have to chase one another on all fours like crabs on a dirty gymnasium floor during P.E. class at school. They're sure as hell not going to do it at an ACL concert. And after Wayne asked us to be the ocean, we too left.

This experience was in part redeemed for me by getting to hear the Flaming Lips perform Vaseline, but Meredith never heard her favorite Pink Robots song, so it was with mixed emotions that we braced exiting the crowd. Thank God, I muttered, and began humming "Nothing" sung by character Diana Morales in A Chorus Line as we moved away from the insanity and toward the port-a-potties.

You got the writing thing--persona, language, attitude, metaphors--all there, girl. When u r ready to publish totally, I'll edit for free. Stef