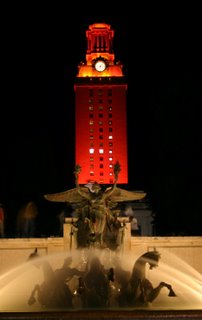 That may be a bit of an overstatement, but not by much. My parents watched football, so I grew up with the Chiefs. But I've never been to a game (other than my high school and college games - both of which enrolled less than 1200 students, so you can imagine the games). Now baseball, I've been to. My dad played in a softball league most of my childhood (my first picture with my dad, he's in uniform) and I've often been to Royal's game. I remember the 1988 World Series. I loved George Brett. I collected Baseball cards even.

But football? I tend to generalize football as the epitomy of the male existance: scantily clad women and men tackling each other. Weird. Add the competition element and it just gets dirty.

I use that word loosely. Very loosely. Let's just say that I've watched two full football games since I took this job, the first two I've watched since college. And the last one was fun. I admit it. I jumped, and wrung my hangs, and closed my eyes, and yelled and celebrated. And then I went to the campus.

It was crazy. Keep in mind I came from a college with a whopping 1100 student enrollment. But UT students were everywhere, taking pictures, screaming chants, high-fiving strangers, hugging strangers, kissing strangers. There were lines of people waiting to buy tee-shirts with the Rose Bowl logo on them wrapped around city blocks at 2am.

All in all in was an interesting study in culture. If I'd have been an alien (although I sort of felt like one) taking notes on human life, I'd have filled a notebook. People are still celebrating.

So here's a pic of the tower they lit up orange. It only glazes the surface of the orange pride right now. But get it while you can, cause I doubt "we'll" be in-Vince-able next year...

The Kansas City/St. Louis world series was in 1985. It was beautiful. Your longhorns may be forlorn next year without Vince.

oh ann...this is disappointing news. don't give in!

don't despair. hey, chris theile, cactus cafe, next weekend. check it out. i'm going with some folks, and you should too.

so, that's the genius of nickel creek in case that last name meant nothing to you.