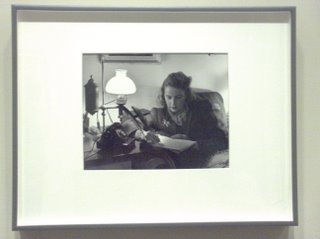 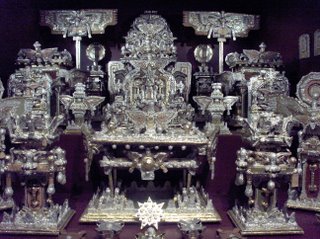 Day Six: I went to Ravensworth Church on Sunday and then out to lunch with some peeps at a joint called "Five Guys." You can imagine how that went over. I fault those five guys for the grease that splattered on my cutie-patootie brand new skirt. I must now leave that topic.

After the hamburger and fry guys, Stephen and I visited the portrait gallary that just opened up after having been under renovation for 7 years or something. It has...shocker...portraits. And other art too. Note that the pic of the woman at the desk is none other than the author of my favorite children's book, Goodnight, Moon. Awesome. The other photo is of a huge, mm probably 12 by 12 area of one janitor's unfinished interpretation of the book of Revelation. But get this, it's made completely out of foil and cardboard and stuff. Note the crowns and suns and thrones. I'm not sure I would interpret the final book of the New Testament in such a manner, but the artist passed on before his work was finished, so I suppose now he knows better than I what the hell that book's about.

That night I hung out with Stephen's roommate Ryan and his friend Kristin, also from Austin. We mainly argued over what to eat for dinner, drank and talked about music most of the night while Kristin fell asleep on the couch. It was a fun time for all. It almost made me feel like I was back in Austin...sigh. Can't I have both worlds?
at 6:51 PM

Ann,
Did you look closely to see if there was a mouse in the photograph of the author of "Goodnight Moon"?
Dad