Actually not in Chile. In the Austin airport, checking in, playing cards, boarding plane, coloring in coloring books, disembarking plane, eating at TGI Fridays and ordering six appetizers and being accused of overeating (story for another time), boarding second plane, leaving Atlanta on a Jet Plane… 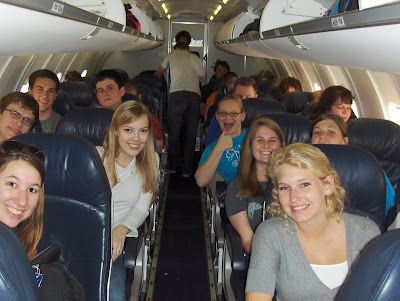 Day two still feels like day one since most of the students only slept about four hours on the plane. I probably got around six. That’s a guess though. The movies offered were lame and since I held the itinerary and knew the day we had waiting, ear plugs, an eye mask and wine with dinner helped get me the rest I needed.

Airplane food is nasty and of course doesn’t digest well, so that proved difficult, but other than that the plane ride was just fine. Over night flights rock. Especially when the plane isn’t full and you can stretch out to sleep in multiple seats.

Written on a sign. Obviously the first two names in our group alphabetically. And obviously misspelled.

We got in their bus anyway.

The first major obstacle could have been a real mess, but fortunately it was thwarted. Several men were at the bus putting our bags in the back. After we loaded, they got on with us and asked for a tip in broken English. Already? Fine. “Do you want the money for the bus now before we leave?” “Yes.” So I handed him the $65 and thought nothing of it. I almost always pay van fares before we take off. My students fished in their pockets for some dollar bills that they handed to the main man speaking and then the men got off the bus. Wait a minute, I thought…

Crap! I paid the guys “working” the airport crowds all the money I owe the bus company!

Wait! I hollered. And tried to explain that I gave him all my money. “Sixty-five dollars. I gave you the wrong thing.” Of course then the man spoke no English but his companion looked on me with pity and told him to hand over the wad again. I withdrew my sixty-five dollars (or 35,000 pecos) and thanked the man and then had to go digging for a dollar bill.

Tragedy averted, we began our drive.

On the CD speakers in the car we heard “I Could Sing of Your Love Forever” in Spanish and “Shout to the Lord” in Spanish and really what more could you ask for when entering a foreign country than American praise songs from the 80s softly serenading you in Spanish?

I just threw up a little.

But the van company was Shalom and as we learned throughout our two days in Santiago, the are evangelicals and really, “why would you want anything other than a Christian driver” so spoke the van company manager. We don’t think Cathedrals are very interesting because we’re not Catholic, we’re evangelicals, but we’ll take you there if you want. The Cathedral kicked ass. We didn’t schedule you a visit to the winery because we know you’re Baptist evangelicals. Let’s remedy that immediately.

You get the picture. 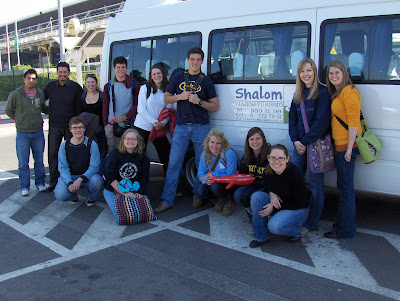 Sightseeing indeed was awesome. Granted, Santiago is a smog-covered city, but it was warm and everyone gave me grief about telling them to pack winter clothes (they have since apologized – more on that later). A beautiful city with the Andes snow-capped mountains on one side and the desert hills on the other, we took a double-decker bus to view the city. We got off to see more closely the Bella Vista neighborhood and visited Pable Neruda, the nobel prize poet’s house with his mistress and eventual third wife. It was awesome and kept going up and one and up one room at a time. Apparently he loved ships (even though they made him motion sick) and all his houses resemble a ships structure.

We ate lunch in an interesting part of town (it reminded me of Austin with the Mohawks and hair dyes and band tee-shirts) that had lots of street vendors selling random stuff on the street. We also came upon two men selling rides on a llama and if you think I didn’t take them up on their offer, you’re wrong. $1.50 well spent. 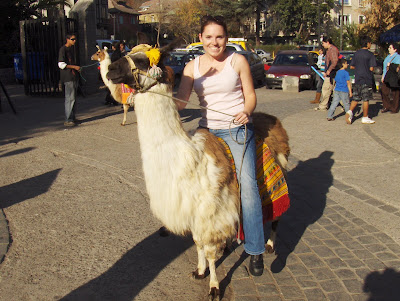 Additionally we stumbled upon a phenomenon infiltrating Santiago’s streets. We first heard and eventually saw the little drummer boy, a twelve year old boy playing drums (percussion) as a one man band in the street (think Dick Van Dyke in Mary Poppins) and dancing. Don’t worry, I got a video of it. He’d being playing since he was four which I was skeptical of at first, but later believed when we stumbled upon a family of men one of whom couldn’t have been older than six playing their drums as a trio.

“What could be better than seeing that little boy playing the one man band percussion set?” our resident drummer Meredith asked, “Seeing three of them.”

We also saw the Chilean History Museum but it had to be the fastest museum viewing ever. I was literally spending three seconds in each room and were done in ten minutes. I did manage to take a few illegal pictures of items I spent a whopping five seconds in front of when they drew my attention. 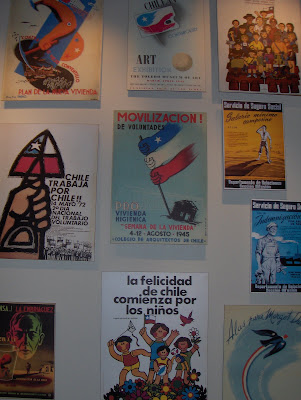 Fortunately most of the art was of a colonial style which I hate, otherwise I’d have been very sad about rushing through a museum. But we were one a mission and had to make it back to the red bus stop.

The fastest way to this stop was straight down the road past the Presidential Mansion. Awesome! Two birds with one stone. We’d make it to the stop and still get pictures of another site on our maps.

There was a glitch though. The guards wouldn’t let us walk by it on the sidewalk. “It’s after hours,” so they told my co-sponsor Steve who stood there arguing with them in Spanish. 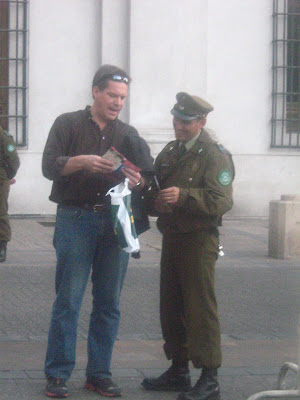 “But they are letting cars drive by,” I argued, perturbed. “Cars can hold bigger bombs than people do.” I guess it’s a good thing I don’t speak Spanish.

So we walked around the park in front of the President’s place and shot for another red bus stop. Having successfully caught it we foolishly thought we could hop off at one more site and then hop back on.

“Okay we’re going back a block to the subway and up on the other side of the street (divided by a fence) and we’ll visit Santa Lucia, municipal park.” It was awesome looking in the dark. 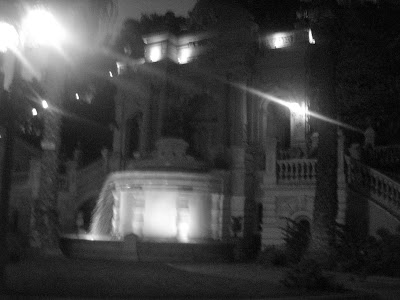 All these lights shining up a hill onto a gorgeous fortress with fountains and greenery. It was like looking at a palace. Up we ran… and ran… and ran until about half the group began to gripe loudly enough that I stopped. “We think we should go back.”

So I hollered at Esteban (Stve, the initiator of this escapade), to slow down and tried to explain to him that we’d been up for like 36 hours and were running on four hours of naptime (he had met us in Santiago after an interpreting gig in Argentina). Let’s go back. So we hopped back down the hill and headed for the subway.

Oh Lord. In the opposite direction of the subway and about two blocks ahead of us and across a street that we physically couldn’t cross until about three blocks past where we were was the LAST BUS of the night.

And we did. If we thought we had run up that hill, we had no idea what was ahead of us. I couldn’t breathe, not because I was running so fast but because I was laughing so hard. At us. At a group of Americans running down the street in the middle of a major world capitol on another continent. It is virtually impossible to run, laugh and breathe at the same time. But we made it. The bus waited while we ran in a giant horseshoe for five minutes and Esteban, who beat us all there, coerced the bus driver to wait for us.

Thank God, he did. He then drove us to the final stop of our tour, near our hotel. After walking five blocks back to Hotel Bonaparte, we agreed to meet up in thirty minutes for dinner which I promised, according to Esteban, was only four blocks away, and I’d be buying.

When we finally arrived.

Four blocks turned into six which turned into ten and I quickly learned that my co-sponsor and I might have communication issues.

“Dude. Seriously. Four blocks? We’ve been walking for fifteen minutes.”
“It will be worth it, I promise.”
“I’m sure it will, but I need to know if something is going to take an hour to get to and from because it affects the schedule I make for the night.”
“Look. It’s right across the street.” (and around the corner and up the block).

“Here we are,” Esteban said, kissing a woman on the cheek in a traditional Chilean greeting. “This is my friend Claudia who will be joining us for dinner.”
“Nice to meet you all, welcome to Chile, now who’s been whining?”

But dinner was good. Delicious even. Italian and expensive. Enough said. 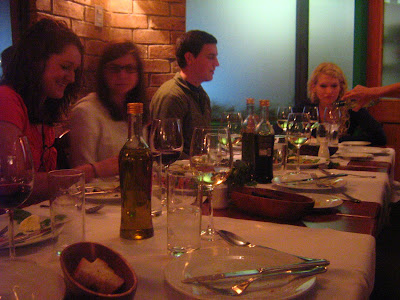 And after another ten blocks home we were in bed. Day one was finally done.
at 9:03 PM

Please for the love of all that is holy, tell me you did get to visit a winery and you took pictures and asked questions for me. Please.

And yay posting a blog while on another continent!

actually those worship songs are from the 90's. I should know okay. Love you and miss you.

early 90s at best. i know i was singing them before i graduated high school in 96...

Ann! I LOVED your blog. hehe. I guess Steven and I forgot to tell you about the airport workers who want tips. Your trip sounds like a blast. I love the photo of the guard laughing at Steven and he argued with them in espanol. How I wish I was with you all.