Okay people. I let you talk me into believing that I received Rachel Ray and Handgunner's and some fat girl magazine because I accidentally got put on some listserve somewhere.

At the same time of year, one year later, I'm not buying it.

Because I've begun to receive mysterious gifts again and these are not from some publishing house.

"Why are you mailing boxes to yourself?" the secretary at worked asked. There were two brown paper wrapped boxes in front of my door with the return address TYPED out as my home address and the deliver to address typed as my work address.
"I didn't. It's a prank. I didn't mail this to my job from my house. That's ridiculous. Here's what I got..."
"Aw...Cute," she said.

She has no taste.

I received two plastic ceramic I-don't-know-what little 1960s nick knacks: TWO boxes, one containing a boy and girl looking adoringly at each other (gag!) and the other, a little white boy and a black girl singing from a songbook together. Fantastic. Except neither was wrapped in packing of any sort so the little black girl's songbook had broken off. Oh darn.

I've been pranked. I knew that Rachel Ray magazine was a joke. I knew it.

At home tonight when I (finally) checked my mailbox for the first time this week, I found two more boxes with the return address being from church. Typed of course and wrapped in the same brown paper. These had two more children, a boy and girl, gazing into each others' eyes (vomit) and then some lame bible think with images of a girl praying and crap like that. Here's the pic in case you need a visual... 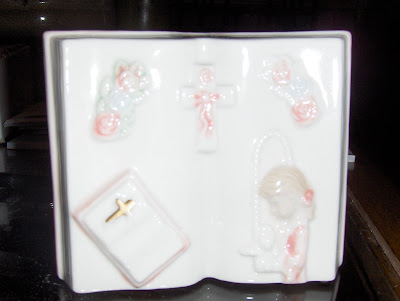 I texted Texas In Africa who was partially responsible for this prank. "Do you want to confess before I go public?"

Of course she denied knowing what in the world I was talking about.

I have to tell you something else though. I've been finding more Paul Powell books around my house.

I know that when Texas In Africa and The Librarian pranked me two years ago they showered my house in PaPa books (ridiculous books written by my former and most un-favorite dean, Paul Powell). Truthfully I thought I had found them all, but then I've discovered several more over the past several months that makes me think there's been another infiltrator. My Halloween party maybe? I mean, one of those damn books was in my movies bookshelf and I look at that all the time to pick out which movie I want to watch so I know it hasn't been there since 2007!

I'm being pranked and I hardly even know it's happening!

You'd think the pranksters would be bored with their unresponsive host, but no. It just keeps on coming. So fess up. Whomever you are. It can't be Frank cause he's in love and planning a wedding. I doubt Cody has time what with his busy ministry schedule. Which leaves Laura and Ginger...

Or someone who's grandma recently died, cause these figurines are ridiculous.

Ugh. I got a HANDGUNNER'S magazine for my 30th birthday and an interracial children's figurine singing christmas carols from a broken off songbook for my 31st.

Help! Normal people get flowers and cards and presents and condolences! I'm getting religious figurines! Make it stop!

And it wasn't me. I am not that creative right now. Did you know a pregnant woman's brain shrinks by about 7%? So, obviously, I don't have the brain capacity to do such a thing right now.

It also wasn't my husband. His idea of a prank is saying "Missouri loves company".

Me thinks thou doth protest too much....

This is the work of a true prankster! I wish I could take credit for it, but alas, I am not involved. I've been out of the loop and town for a couple of weeks.

Remember, dear Ann, that pranks = love! Someone put a lot of thought and effort into those, which means they must love your a lot.

Hmm... not Ginger. That doesn't rule out Laura though. And I have a new suspect!... NATALIE! She helped Grandmommy move last weekend. Hmm...

Also, G and I contract out our services these days. You'll be relieved to learn that you are most definitely NOT this year's FBC prank target.

Oh, Ann, this by far almost tops all the peeps that someone put in your freezer!

I do agree that someone loves you a ton to go thru this effort :-)

HYSTERICAL. Thanks so much for sharing! :)