I Just Couldn't Let It Go

So my father always taught us never to discuss politics or religion with friends. He's probably developed this mantra because he lives in St. Joseph, Missouri and other than my mother, he's the only democrat in his whole 600 member church. So I get it.

So when I saw the following post on facebook, "I'd like to know how that study on Global Warming is going," my father's advice echoed through my head. Then I remembered that I have 1,045 friends on facebook and this is a girl that I apparently went to High School with who married a boy I went to Grade School with. We're not exactly close. So I didn't think my father's advice about "friends" was exactly applicable.

I joined in on the conversation which went as follows...

Amie: I'd like to know how that study on Global Warming is going

Richard: Obviously it is a hoax!!

Ann Catherine Pittman: actually global warming causes an imbalance in the climate which yes, causes crazy stuff like an arctic freeze to sweep across america. it's actually really scary that it's 20 degrees in texas and that we've managed to destroy our environment to the point that this would happen.

Kappy: Yes, Ann. That's what I remember from back in the 80's when my science classes were explaining what would happen by the year 2000 if we didn't do something now. Can any of you remember being on tornado warning this fall? I don't think we had one time that we had to head down to the basement. So... who got those tornadoes? Tennesee/Kentucky - places that don't usually see them. Things are a-changing! But I don't miss the tornadoes...

Richard: The scientist have admitted that Global Warming is a HOAX

Kappy: Not according to CNN: http://www.cnn.com/2009/WORLD/americas/01/19/eco.globalwarmingsurvey/

Keli: The media is part of the problem

Janis: do you think global warming is the reason I get hot flashes?

Richard: The media is always the problem

Amie: Janis, I don't think the environment has anything to do with your hormones.... sorry. lol

Ann Catherine Pittman: dear keli and richard, i hate to be blunt about this, but you need to read a science article once in a while. i don't know where you're getting your info from but it is sorely off kilter.

Keli: I am not sure exactly what you mean by "science article". If you are refering to newspaper, magazine or articles you have read on the internet, again...that is the media. If you are talking about actual scientific journals on the subject, you should know that there are just as many scientists that dispute global warming as there are that promote it. Either way, you should not assume that someone is not educated on a subject just because they disagree with you.

Keli: way to go Aim, look what you started!! lol

Ann Catherine Pittman: i'm assuming you're getting your "media bias" information from... the media? be consistent, and if you're seriously nervous about media bias, be sure to be critical of all your media sources... FYI, Fox News is owned by biggest media giant of the world.

Ann Catherine Pittman: i'm sure amie didn't intend for this, but i can't help it. and by science articles, i meant articles publishing the scientists' research - just to clarify.

Michelle: Oh and for the record, here in Texas--it's not "really scary"! I've lived in every corner of this great state, and just because a cold front blows through from Canada doesn't mean we should all panic and bow down to Al Gore! The words "Arctic" freeze your beloved liberal media outlets love to toss around lately are meant to stir up feelings of "OMG, The sky is falling!" Arctic refers to the area the air is coming from---Canada (Look at a globe-for the geography lesson) and freeze, well that sounds so much scarier than cold front doesn't it?

Keli: BTW I get my "media bias" from...my own obsevations, some of us here in America are still able to form their own opinions and are not seduced by fancy rhetoric, idealistic notions and threats of what could happen if we do not conform. oh and thanks for FYI, who would have thought that a national NEWS station would be owned by a media giant, go figure.

Ann Catherine Pittman: my point about Fox news is that because it is owned by one man, there is no accountability. usually people who talk about media bias watch fox news and consider it newsworthy. whereas if you watch cnn and they report something inaccurately, the new york times will run a better story and if they get something wrong you can get a better scoop from msnbc and we can always check snopes to see if they've done any research and those are just the really popular mainstream news communicators. i.e. there's competition to present the best news. whereas with fox news "fair and unbiased" always comes with a commentary. and usually really ugly, unkind ones about anybody who doesn't think like them. and that's not news. it's like one long opinion page that you have to watch.

Michelle: Does this mean you actually watch Fox news?

Keli: Well it sounds like you have a pretty good plan mapped out for when your news sources are incorrect.....

Janis: will somebody just tell me when my hot flashes will end?

Brad: Ann, you better hope CNN doesn't get it wrong, cuz your fall-back media outlets (i.e. MSNBC and The New York Times) are worthless and on the verge of bankruptcy. It amazing, ann started with an argument on global warming, and now is on a fox news rant, when she is the one that brought up fox news in the first place. I smell a liberal!!!

Ann Catherine Pittman: Amie brought up global warming and Keli brought up the media. I just responded. And i did so without name calling and sarcasm. But I give up. You guys win. This conversation is making my blood pressure go up. And hopefully you're right about climate change... but i wouldn't bet my children and grandchildren on it.

Too bad that's what we're doing...

Here's a picture of what scientists are calling "Plastic Island" an area in the Pacific ocean between Hawaii and California that is a collection of trash that has gathered in one area of the ocean due to currents. You guys, Plastic Island is TWICE THE SIZE OF THE UNITED STATES. 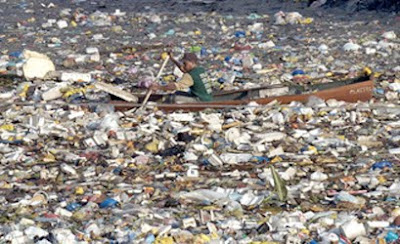 Yes, that's a man in a canoe trying to swim through it.

Most people know that Miami will be underwater by the next century (when your grandkids are in their prime) but even more disturbing is that "the threat is more imminent than was predicted by the Interplanetary Panel on Climate Change (IPCC) just two years ago." Instead of the half meter rise in oceanic water levels, so much ice is melting, scientists are expecting a full meter now. So don't buy any real estate that you plan on passing on to your kids in Philadelphia or D.C. either.

Scientists now say that prevention of global warming or climate change or whatever you want to call what is happening to our eco-system, is not even an option anymore. The ball is rolling too quickly. We're now in the coping phases. Mom and Dad got divorced, so how do you adjust to living in two houses? How do we adjust our living to adapt to climate change? How will our habits and houses and jobs and lifestyles change? How will we cope with this new reality? Bubble villages? Head towards the moon? I'm exaggerating, but hopefully you understand my point. No more prevention, only adaptation.

So do what you can. Quit using plastic bags. Get some cool re-usable ones. Quit buying water bottles. Get a canteen or a flask or whatever and refill it. Quit using disposable diapers. There's cloth diapers and fuzzy buns and all sorts of options now. Quit driving an SUV when you're the only one in it. If you live somewhere with adequate public transportation, use it. Plant vegetation and grass that's local so it doesn't use up as much water. If you live in Austin, join Facebook's "Austin's Dirty Little Secret" and write letters and vote about our local coal plant and other ecological issues. For more easy ways to live adapt-ably, buy New Day Revolution: How to Save the World in 24 Hours. Or if you're religious and you're not really buying all this, check out A Greener Faith which chronicles religion and environmentalism and gives a biblical precipice for saving the earth. The cool thing is that changing the things I just mentioned not only makes the earth healthier, but is good for your finances too. Being green doesn't always have to be expensive!

Email ThisBlogThis!Share to TwitterShare to FacebookShare to Pinterest
Labels: Environment

This is why I "hide" certain friends from my feed.

And, I'll send - free of charge - a copy of my book to any climate change deniers. If they won't read science, maybe they'll read my few attempts at humor.

And Sam has volunteered this website which speaks directly to the argument (the original one) started above... http://www.grinzo.com/energy/index.php/2010/01/09/the-arctic-oscillation-again/

Sweetie, I tried to tell you. It is impossible to reason with "bias." Some advice: observe, analyze research and draw conclusions, but be careful when getting into a political discussion with anyone...especially friends. They become less friendly.
I love you and all of your progressive thoughts.
Dad

Preach it, Ann! It's terribly discouraging, I know, to have one of these discussions. As people of faith, we must be concerned with truth. (For me, that includes capital t Truth as well as simply telling the truth--more mundane, but important nonetheless). To propagate untruth (there are just as many scientists who deny Global warming as confirm, etc.) is irresponsible at best and sinful at worst. Kudos for calling them out on that.

Thanks, Sam, for your good work on this issue. Love your blog and 5 minutes of caring emails.

BTW, when did Al Gore become such an object for ridicule for simply loving and caring for our home? Hate that.