The Most Beautiful Place on Earth

The decision to awake at 3:30 to pack the car, drive to the Crater Lake Rim, and watch the sunrise was a difficult one that I left to The Doctor and The Aerialist.  I'm in this for the adventure, and the three hours of sleep that event would have afforded us would have affected my decision.  Apparently it affected their decision too.  We slept all the way through the night and left the next morning at a normal hour for what shall hereto be known as The Most Beautiful Place on Earth.

Actually, that's not true... about the sleeping through the night thing I mean.  Sophie woke her mother up four times distraught about why they had packed their entire life into a car and driven to Southern Oregon.  I too frequently awoke from disturbing dreams of puppets chasing me around a burning house.  Not even puppets.  They're those cardstock animations with circle hinges at the joints so you can thumbtack them into the wall in different positions.

But Crater Lake stilled all that anxiety, because, as was mentioned, it is the most beautiful place on earth. It is also the most serene, surreal, natural phenomenon I have ever seen since I put on a snorkel at Hanama Bay on Oahu and discovered that some fish are actually florescent pink, unlike the stale grey trout we pulled from the ponds on poles in Missouri.  Wowza.

I've never seen nature so untouched, unruined by humanity.  The water was so blue, and so still that a small white powder puff of a cloud was perfectly reflected in the water as it would be in a new glass mirror.  Gorgeous.  With colors as vibrant as the ocean, but without the white capped waves breaking it up.  Without the brown or white sand muddying where the water meets the land.

And if the birds in the evergreens, and the chipmunks (don't feed them anything with salt signs warned!) weren't the perfect compliment, Crater Lake has an island in the middle of it.  And the little land mass' name? 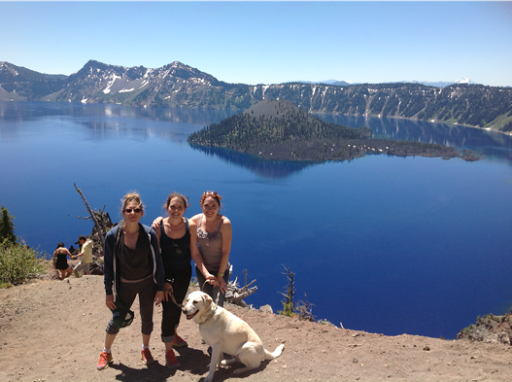 It's like a little wizard hat poking it's head into the sky.

And it completely trumped the previous night's Dementors who were trying to suck the life out of The Doctor and I (The Aerialist never saw them).

Oh, it was heaven.  Heaven is officially the place where the top of a volcano sinks down and somehow water fills up the little natural pool that remains but only enough that a little island of the former top of the volcano remains and the angels name it Wizard Island.  Heaven. 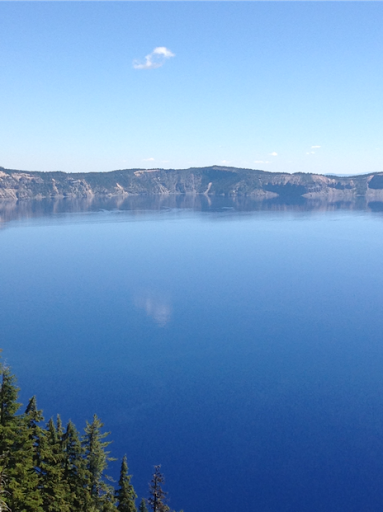 Even leading up to our arrival at Crater Lake was pretty dreamy.  We stoped at sites along the way including Rogue River (rawr!), the Natural Bridge, and the Rogue River Gorge.  This was technically "hiking" since we were in the woods, following a trail on a map, and there were signs warning that handicapped persons might not have adequate access to all viewing areas along the river. However, since even non-ADA approved grade elevations aren't very steep, I was fine and am happy to report I continued to breathe normally. 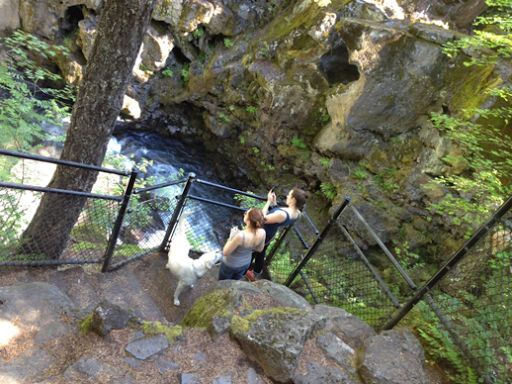 After our totally amazing day looking at Oregon's finest elements, we headed towards Idaho.  This drive appeared to be an extension of The Most Beautiful Place on Earth as was seriously unreal.  The Aerialist was driving and kept expressing her concern that we were about to run into a large scrim with projections of amazingly dreamy landscapes.  Desert mountains with green crop fields and a small river that paralled our highway.  I probably took fifty pictures of it too.  Sorry the view from my camera through the car window doesn't do it justice. 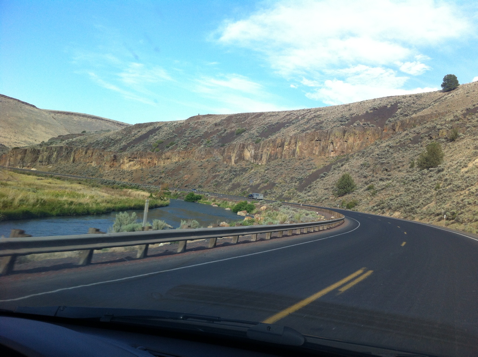 Anyway, I wish you, my faithful readers (i.e. mom, dad, Grandma, and a couple of people who *like* everything I post on FB, but whom I'm not convinced actually read my blogs) could have been here with us.  It was amazeballs, and way better than any cat video you could watch online to make you happy.  The Most Beautiful Place on Earth takes the happiness quotient.