Chile: Day Four or Day Is Done, Gone the Sun

On the morning of our flight out of Santiago and on to Temuco, Steve argued that we had time to visit Santiago's cathedral before we headed to the airport. So, sure enough, I complied and our Shalom amigos (Julian and Freddy) dropped us off back downtown to view the inside of this beautiful cathedral. I asked my students to take in their journals and spend not only some time admiring all the art and craftsmanship, but to also meditate and prepare for our day ahead. 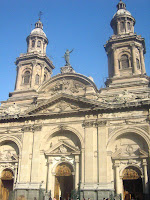 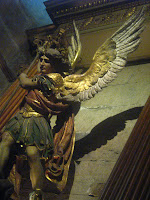 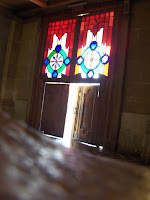 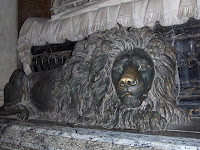 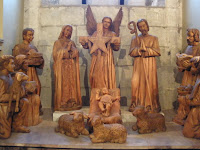 The cathedral was beautiful and I spent some time writing on thankfulness.

After yelling and hollering and threatening that if they bought one more postcard they would miss our flight, everyone was back on the bus and headed to the airport.

The flight to Temuco was short and not in a puddle hopper which I think everyone was grateful for. I've flown in some real doozies overseas and so it was nice to be in a stable aircraft. After landing and searching for our bags we met Jaime, the first member of the Fundacion Team.

He spoke no English.

Outside, we met Viviana, the director of the children's home. And after explaining to each other that neither of us spoke much of the other's native language we began the long haul of stuffing twelve people (and three adults from the Fundacion Para Amar) into two vehicles. Little did we know that this trip would merely foreshadow many more to come.

Three minutes down the road, we stopped. Now, I need to explain a little something about dynamics in our group and some jokes that developed - rooted of course, in reality. One such joke goes like this: Can I change money? Sure... tomorrow. You see we NEVER seemed to be able to find or have time for changing money from dollars into pesos. It became a little ridiculous actually. In the airport: "Can we change money?" Too expensive, wait for in the hotel. At the hotel: "Can we change money?" Not a good rate, wait until later. On the city streets: "Can we change money?" I can't find a place that's open. I mean, seriously, as a group we changed money ONE TIME in 11 days that i can remember.

But three minutes into our drive into Temuco, we stopped. "Steve is taking us back to the airport to change money." This came over the walky talky about a bunch of niners and ten fours. But changing money? Brilliant. Finally. This is what could have happened before we loaded 22 suitcases and fifteen bodies into two cars, but whatever. We headed back.

The money change place was closed. So Steve loaned money (as he did most of the trip) to the students in dire need at that very money and we piled back into the two cars.

And after half an hour facing backwards and practically sitting on the dashboard of our van... 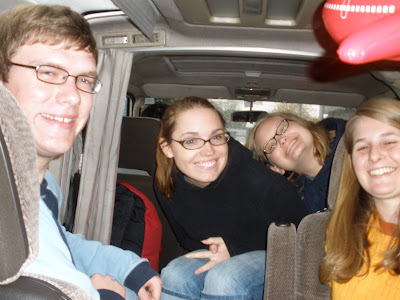 Our mission was beginning.

It was pouring. The sunshine and cool warmth of Santiago had been replaced by pouring rain and cold wind. We came out of the van like clowns from a car in the circus and rushed inside the building that would be our home.

A cute girl of fifteen wearing anime-looking pigtails and a pink shirt greeted us at the door with a kiss on the cheek. She grinned from ear to ear. The men who picked us up were bringing in our wet suitcases which began piling up at the bottom of the staircase to our right. We just kind of stood around until Viviana showed us upstairs to our room.

The main building had two wings: the side the girls use with the kitchen, dining area, study room and offices and another side that can be rented out by groups for small conferences, meetings, retreats, etc. Above the two wings are the "girls' side" and the "boys' side" suites with bedrooms. Each area has a small kitchenette, dining and living room area and 7 or 8 bedrooms with one large bathroom like on a dormitory hall.

The accommodations were excellent. Better than I expected. But that would turn out to be a theme for the week.

"I was beginning to wonder why we came all the way over here to work" one student reflected on the first hour a couple of days later.

We took quickly split up rooms and unloaded our luggage and put some extra layers of clothing on. (There was no heat at the Fundacion). And then we headed downstairs to the left wing for a late lunch: some sort of ground beef stirred into mashed potatoes with melted cheese on top. A huge plateful. I ate around the meat as my stomach was still irritated by the short plane ride earlier that day. Best not to make it any angrier by adding cow to it's digestive agenda. "No te gusta?" Viviana asked. "Airplane," I responded and pointed to my stomach and gave the thumbs down sign. She nodded her head.

"Now the girls will be coming in soon for afternoon activities. Do you have games you can play?"
"Uh..." Most of them were outdoor games. But based on the gushing of water outside the window and the flickering lights, I guessed we wouldn't be playing outside today. "Si. No probleme."

After lunch all the tables and chairs were moved to the sides of the room and when we re-entered the dining hall having had a brief brainstorming session the little ninas began to trickle in. One by one they came by all twelve of us giving us an hola and a kiss on the cheek. One by one they filled their chairs laughing and giggling and talking, I suppose about the new gringos.

"Okay girls, quiet down, first we are going to do introductions," Steve translated. "Let's start with the visitors." Oh god. Here we go. One by one we went down the line saying hello, our name, where we were from and where we went to school and Steve translated to the children.

"Hola, Mi nombre es Ann. And I'm from Austin, Texas where I'm a minister. I'm not married, but I do have a dog and two cats." Steve translated and everyone laughed. Only later did I learn he told them "two cats: a good one and a bad one."

Then the children introduced themselves saying their names and where they went to school, how long they'd been at the home and also pointed out any siblings sitting in the room too. There was the shy new six year old who had just arrived the night before. There was an 18 year old in school to become a teacher. There was a set of three sisters. There were the squirrelly girls who when it came time to talk mumbled with their heads lowered and their eyes peeking out from under their bangs.

We ended by meeting the tias, the adults in the room with us: a social worker, a sign language linguist, two german volunteers, a psychologist, and a cook. All tias.

"Geez there's a lot of women named Tia who work here," I thought to myself. Someone explained later that Tia means "aunty." And Tio Steve means Uncle Steve.

After countless rounds of "Ride That Pony," "Gorilla, Man & Gun," and "Look Up, Look Down," and some other games the girls taught us, 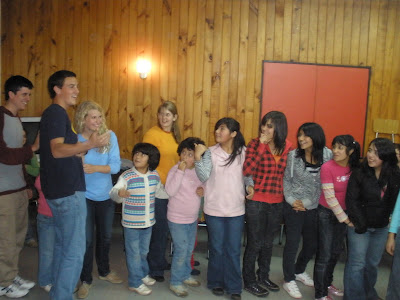 we were exhausted and took a break to move the tables and chairs back into their lines, wash hands and prepare for dinner.

Before we ate though, Viviana asked if any of the students had anything they'd like to say.

The 18 year old (who got to sit with the adults at our table) said thank you to the visitors from America for coming here and gave thanks to God for us. As we began to start grace one of the little girls piped up that she would like to speak. She too gave a brief but mature word of welcome and thankfulness to the Americans for joining them. Then the girls all sang their grace in Spanish of course. Don't ask me for the words. I listened to them all week and never picked it up.

Then we ate. Hotdogs in a huge white subway bun with mayo and guacamole and tomatoes slathered on them. And there were some chips and crackers and a slice of cheese and (as I was coming to realize would be a regular at every meal) tea. With sugar. Lots of it. The lights flickered and went out. "Oooohh," the girls all squealed. Just like North American kids.

After dinner we received our second round of kisses as the girls filed through us saying Buenos Noches and Ciao. We looked at each other amused and retreated upstairs.

"Devotions in fifteen," I hollered into both suites.

Anna's turn to lead Devo Time, as it came to be called revolved around her question, "How do you experience, God?" Several students mentioned music or traditions as how they experience God, but relationships was the real winner: experiencing God through other people. Hmm. How do I experience God? "In words, I think..." I finally answered. "I mean, it's no surprise to most of you that I'm not really a kid person. I like children one on one or one on two, but mass quantities of children make me tired and quite frankly, I'm exhausted after the afternoon's activities. But what gives me energy is words. I experience God best through beautiful words, well crafted sentences. That's why I like the bible and story telling and preaching and music so much, I love well beauty created from words... I learn about God through the creative communication of words and I return that love to God through words. I think that's my final answer."

Anna closed us in prayer and most of us headed to bed, seduced to sleep by the pounding rain and our pounding hearts. Tomorrow would be our first full day at the home.
at 12:17 AM