Day Six or Our First Day

Although it was the sixth day into our trip and although we had arrived at Fundacion Para Amar two days earlier, Day Five was our first full day of work at the Home.

We awoke early enough to walk with the girls to school. And three of us rode with Jessica, a deaf and mute girl at the home to her school where she would live for the week. It was a little sad to have to say goodbye to one of the girls already. She had been the second child we met, hanging around the stairs up to our apartments and then clinging to Rodrigo (Viviana's husband) when we found her. We were consoled because we knew she would return on Thursday for the girls' birthday party (it was Monday).

I wondered how the girls would react walking to school with a bunch of Tias and Tios. I remembered the kids from my elementary school who went to a Home as well. Everyone knew who they were and they didn't have a lot of friends because they smelled different, looked different and had lice. But the girls (after a greeting of kisses) had already found their favorite Tias and Tios and slipped their hands into ours and we headed down the block to school. I walked with a middle school aged girl named Rebecca and carefully monitored her reaction to me. She called out to a friend getting off the bus and hand in hand they walked in front of me toward the school. We crossed at the walk together and when we arrived she kissed me good-bye, as did her friend, and bid me good-bye as did who friend who looked sort of jealous of our relationship. 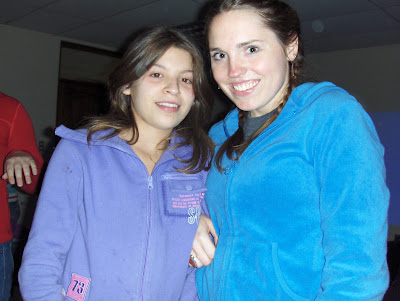 (picture from later in the week)

Maybe it's cool to have a bunch of Americans walk you to school, even as a teenager. Who knows.

Several of the girls didn't go to school at all though because their teachers were on strike. Not getting paid enough or something, who knows. So after we return from the short jaunts to schools and had our breakfast, as we began our work we were often spied upon by a little nina or two. 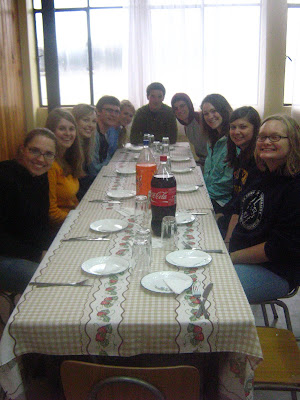 Our jobs were as follows:
1. Paint the fence
2. Paint the storage closet
3. Beautiful the study room

Piece of cake! I thought when Viviana told me. But each job proved to be more challenging than I first anticipated.

The fence painters had to first scrape off with a metal brush the old paint chips. And there's four sides of each tall skinny pole to paint black. And you can only paint when it's dry and sunny... riiiight. 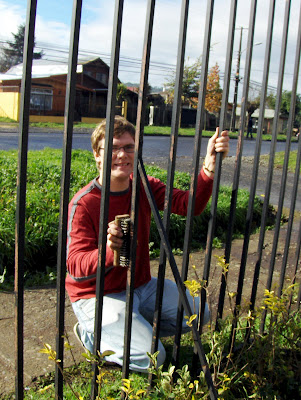 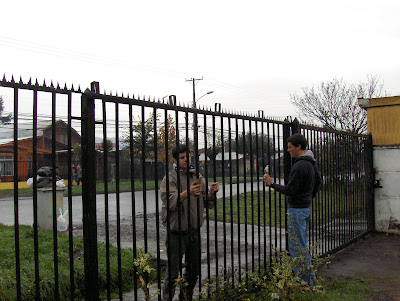 The storage closet people had to first remove every book, paper, phamphet, toothpaste bottle and piece of trash from a closet that was probably 8x8 feet wide. That took several hours. Then they had to sand the shelves and clean them. Then finally paint. Probably 50 shelves and each of the four posts around them. Whoa! 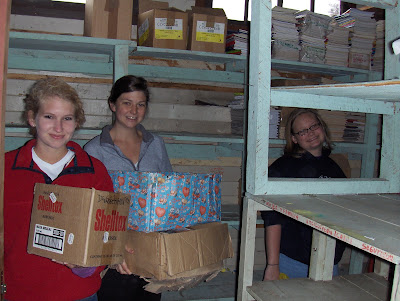 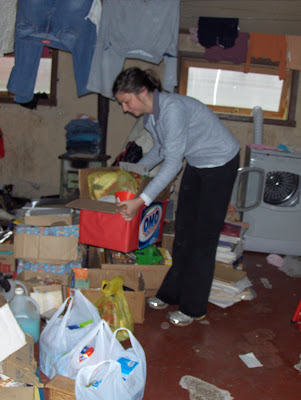 And the study room people got to do the fun stuff. Those studying to be teachers got to make initial plans for the room. Then they left to buy supplies while others began washing walls (which would be polished), moving huge furniture items to the hall, sanding tables (which would be painted) and cleaning out the room. 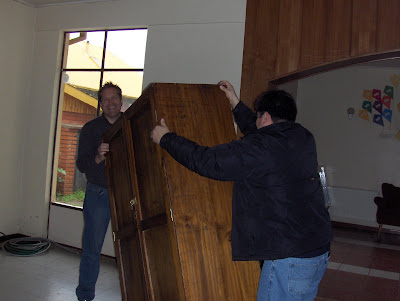 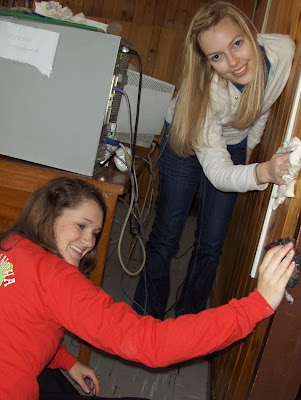 We broke from these jobs around 1pm to clean up. During this process, Glenn, Grant and I discovered that we had been painting with corrosion-free black paint which would not come out of our brushes or off of our hands.

We were late to lunch.

But at least our hands were no longer Black. All. Over.

That afternoon we piled into two cars and headed out to Mapuche land again. This time (now in sunshine) we visited a religious site where they have ceremonies and religious festivals. Here is the god(?) who stands in the middle of the big open field. 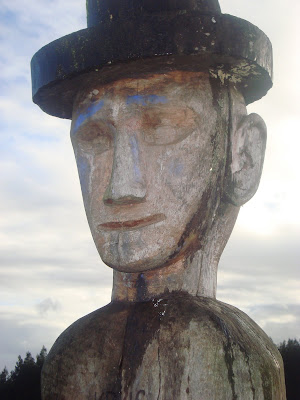 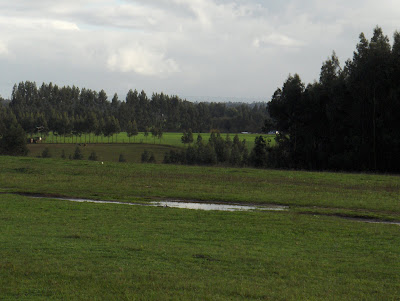 From there we squeezed back into our cars and headed to the Temuco market to shop. That was fun and reminded me of all the shopping malls anywhere overseas. Name a country and I've been in a little shopping pavilion like that. Lots of touristy things for cheap and you have to haggle for your prices. I picked up a couple of small gifts for my sister though. And a little wooden Tea holder. I really wanted a sheep fur rug but didn't want to fork over the money for it. But it was SO SOFT!

We were late to dinner that night and Tia Ceci was not happy with us. I don't know what Steve said to her but he apparently smoothed things over.

That night we gathered, a little poorer than the night before, and had our next devo. Meredith led with some questions about community. And I kind of started to push back on the students. Several of them talked about their churches and where they are now and Christians versus non-Christians and what community looks like with different people. I realized I have had very different experiences with community than most of these students. And that was weird. By this fifth night of devos I was having fun just being in a community myself. So often I've leading the bible study or discussion or am at "work" where I have to behave and monitor what I say, but with these students and Steve, I was safe, so I felt comfortable talking. That was an amazing feeling. Gosh it was fun just talking and throwing out ideas and discussing things as a group where I was just one of a crowd. It made me realize how much I miss being in a small group or bible study of my own apart from my role as Minister at the church.
at 12:21 AM