Oh my gosh it's getting harder to remember everything. I wish I had written this all down earlier. But a month ago I was in Chile and I'm not done telling our story, so here goes.

We woke up to find even fewer kids waiting to walk to school at 8am. The strike, remember? So we headed on to breakfast and on to our second full day of manual labor. It was pretty much the same, not enough tools, not enough heat and not enough sunshine. But we ploughed through. In the meantime we met Carlos.

Carlos is a badulaque. Or something. He was obsessed and I mean obsessed with this word. He would say the word to one of us and tell us to repeat it (he'd been in the military so he knew English pretty well) and then when we did he would laugh and laugh at himself or us or the word or I'm not sure really what. Apparently badulaque means jokester. And Carlos was one. But he was also a devout Christian. He grilled both Glenn and me and separate times about whether we were called. Called. CALLED to the ministry. "YES! God. Get off my back Carlos, I'm doing my best," I wanted to say to him, but I just smiled sweetly and said, "Yes Carlos, I am called to the ministry." Like the Tias, he was impressed that I'd been to seminary but I could tell he was skeptical. With Glenn he prayed for discernment and teared up, sharing his story of how God had called him to work at this home and be a Tio to these children even if only as a janitor. Carlos would sing songs in the hallway and always wanted to sing a duet with Elizabeth or me. Or he would sing a verse and then tell Esteban to translate it. Then he'd sing another. 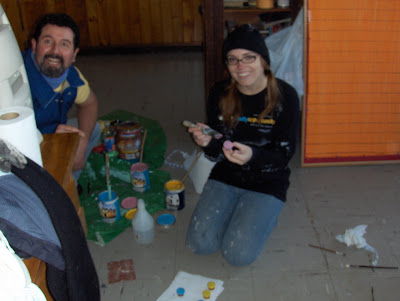 (that's Carlos on the edge of the picture... I'm trying to find a better one of him)

In addition, Carlos had a wife (though you would have never guessed it the way he carried on with me and some of the other girls) who made organic vegetarian dishes. And after Viviana cornered me one day and demanded to know how many vegetarians we had in our group since they'd noticed us passing the food off to other people, several of us got to try her veggie dishes. They were a welcome alternative to horse...

Tuesday afternoon we (North Americans) gave a presentation on us. Or the U.S.... depends on how you look at it. The home asked us to tell about ourselves so most of my students brought pictures or small memorabilia of our families or where we live or where we go to school. So Meredith talked about D.C., Katherine talked about Louisiana and Mardi Gras., Molly presented on Colorado. The rest of us spoke about Texas and what we do. Naomi illustrated a dance she does with her company where they put candles on their heads. David showed pics of the Appalachian Trail that he hikes with his dad. Glenn juggled and showed pictures of his fishing boat. You get the picture. 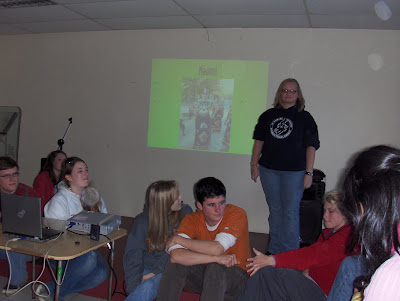 Steve started our presentation off by hooking each girl up to an earpiece so that they could hear his translations of what we were saying while we gave our presentation. They LOVED that. He told about his job of translating around the world. Then I spoke about my family and Janie and Potter and Zorba and I talked about loving the theater and how I get to do that as part of my job. I showed pictures of me preaching, doing a wedding, leading worship, and a pic of me and Roger on my ordination day. Several Tias asked questions after my presentation. Did she go to school? Yes, Steve responded. College and Seminary. She is ordained? Yes, in 2006. Even though this is a Country with a female President, a Baptist Convention with a female president and a Baptist Home with a female director, they all were very impressed that I (I'm assuming as a woman) could accomplish that. I'll never forget looking at Tabita's face after I (Steve) answered the Tia's questions. She looked at me with an expression of surprise that seemed to say, "You go, girl."

And you can do it too! I wanted to say to all those darling girls. You can do whatever you want. You can finish high school and go to college and get a career and succeed if you just put your mind to it and set your heart on it!
at 7:08 PM

I think this is my favorite story so far. :)