The Happiest Place on Earth

So I am totally stupid when it comes to airplanes.

Listen to this. Once I went to a conference and I bought my plane tickets cheaply and in advance. When i arrived at the conference which was two days long I realized I had only booked myself to stay there ONE day so 24 hours after I arrived I returned to the airport to catch my flight back to Austin. No, I didn't wan't to pay the $100 to change my flight and stay an extra day. Fine, so i thought. The problem arrived when I arrived at the airport and learned I had remembered incorrectly and that indeed I had booked myself to stay for two days and so, of course, now I was a day early to the airport. At which place I did pay $100 to change my ticket to that very day and hour because I was too embarrassed to cab it back to the retreat center and admit my stupid mistake.

Fast forward to January. I search for a month, polling friends: who's staying longer after our Current Retreat in Orlando this year? Who wants to stay longer and go to Disney World with me? Do any of my friends want to fly down and hang out with me? No takers except a couple from my church who are very couple-y and who have two kids and will be away from said kids and so I don't want to be with them and infringe on their time. Oh well. No happy place for me.

Sunday I arrived in Orlando and discovered my good friend Julie is here at the conference and she and her fellow residents are staying longer!! Thrilled, I pay $100 to put my flight on hold for some other time and buy an $86 ticket back to Austin for Saturday morning.

Julie is flying out Friday morning. As are all her friends. Which of course I didn't realize until about 15 minutes ago after we checked into the hotel for... you got it, one night. This means I will be homeless in Orlando as of 8am on Friday.

So, if you find yourself in Orlando, specifically Disney World, and happen across a sweet, 30 year old (a little deranged), red-headed woman talking to Eyore... it's me. Come rescue me from the happiest place on earth.
at 3:18 PM 2 comments:

I've been neglectful, it's true. But I've been SO busy... so that's my excuse. I have been thinking on all sorts of fun things that, honest to god, I really do intend to write about soon, but it just hasn't happened. Monday was my first full day off in February, and I spent most of it sleeping and eating and cleaning. Although I did work out... or did I? I can't remember now. Yeah, I'm gonna go with no, I did not work out. Golly and that was just yesterday.

Obviously my memory is a little slow.

As is my metabolism. I went to the doctor today and discovered that I am the heaviest I've ever been (with the exception of my first year in college - the freshman fifty you know! - oh wait, i think that was supposed to be fifteen). And while I'm not complaining, I am sort of lamenting what to do about my closet full of clothes that aren't fitting right and look terrible on me.

On a lighter note (always make fun of yourself!), I'm also the happiest I've been in a long time. I don't know if it is all the hard work I did at the therapist in 2008 or my attempts to bribe and brainwash 2009 into being a fantastic year, but something is different. And I'll take it while it lasts.

What isn't lasting is my youth and naivete. I learned something tonight about myself. I sort of discovered that I wasn't a teenager anymore and I'll never be a famous movie star. Stay with me on this. You see, I've spent the last two days catching up on Harry Potter movies I've missed over the past few years. And now that Harry's fifteen I thought tonight, gosh, he's cute; I'd date him. And then I realized. I'M THIRTY. I will never date Harry Potter because I'm TWICE HIS AGE. And not only that, I'm not famous, nor will I ever be, so how would I meet him anyway? I'll never be a movie star. I'll never be a young beautiful woman who gave a dazzling performance on the big screen and is now accepting her Oscar. Although truthfully (sorry, Harry), I never actually thought I'd marry a movie star. I always figured I'd marry someone normal and a little boring but who made me laugh and didn't mind raising our kids in my movie set trailer...

I know that seems ridiculous and a little narcissistic. But I think that until tonight I honestly thought I'd get "discovered" someday by someone who immediately saw my raw talent and dashing good looks. And tonight I realized that's not going to happen. I'll never be interviewed by Barbara Walters. I'll never be saving my parents the two best seats in the house for the musical I'm starring in on Broadway.

But despite my obesity (smile people, it's a joke) and my epiphany that I'll never be Nicole Kidman or Glen Close and the slow realization that all I've got is a house, some pets and a bottle of vodka, I'm taking it remarkably well.

Scratch the bottle of vodka. I forgot I'm giving up sugar and alcohol starting tomorrow morning.

So that's the scoop. I've been very busy getting fat and getting deflated. Ironic, I suppose. But the truth nonetheless.

Of course, if anyone important is reading this right now, and you want to scoop me up and escort me off to LA to film the next Moulin Rouge, that's okay too. I'd gladly revise this post and lose thirty pounds or thirty years for the role. :)
at 11:20 PM 3 comments: 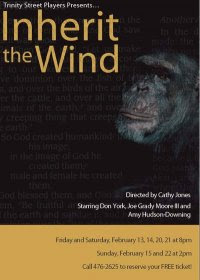 This weekend, in honor of Darwin's 200th Birthday (today!) and Baylor University's Science and Faith Conference that FBC will be hosting in September, and because the Texas legislature is still debating whether to add the un-scientific study of Creationism into our sceince textbooks, Trinity Street Players of First Baptist Church of Austin, TX will be presenting Inherit the Wind.

What would you willingly wake up early for on a Monday morning. And I mean early. Like 8am?

I'd wake up for my sister.

Knowing she would arrive at 11:30 that day, I was in work at 901 Trinity street by 9am. Ask the ladies of the office. They'll vouch. It was like a miracle. Bur the Pitts was coming in to town so I worked hard Sunday and Monday to get a lot of work done so when she arrived we could spend maximum free time together.

We fared pretty well. Of course, I had rehearsal three nights and church two nights of the four she was here, but other than that and a couple of hours here and there in the office, we got a lot of time together!

What we always do... eat, drink and shop.

Day one we drove straight to church where we were hosting the annual Christian Life Commission Conference. But for lunch, we quickly headed to, you guess it, Amy's favorite restaurant in Austin, Opal Divine's. Ah... a little slice of heaven. 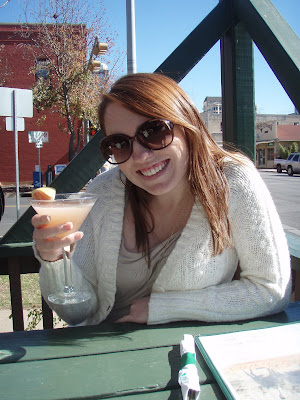 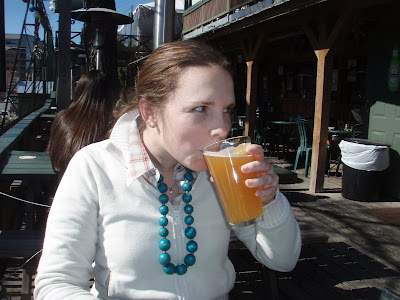 Amy wanted to see two people when she was in Austin: Amy and Michelle (and of course, Grant and Chris who go with those women). When probed further she added Frank and Jane & Bill to that list. We almost covered everyone.

Monday night after rehearsal, we ate dinner at Katz's and visited MoMo's where Grant & Amy's band were playing. We met up with Michelle and Chris and it was a fun, if late, evening. 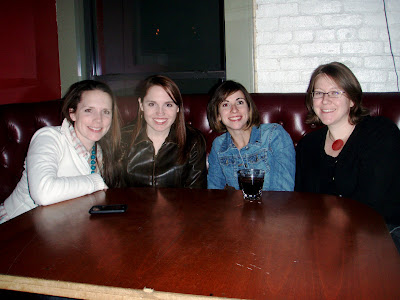 Tuesday, Amy, Michelle and I worked out at the Y (love you steam room!) and then lunched at Zocola, a new restaurant for Michelle and Amy who loved the frozen sangrias. 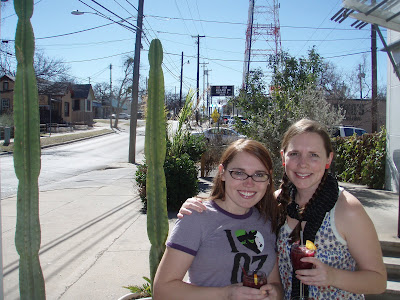 Delicious, I agree. Then we crossed the street to one of the old time drug stores still in Austin and I bought, you guessed it mom and dad, a chocolate malt. And then shopping on SoCo! God, I love Austin. We grabbed coffee at Jo's and then headed to church. Dinner was eaten late when we picked up Parlor Pizza after rehearsal and returned home to watch Ocean's 13, a series of movies Amy and I love. Don't ask my why.

Wednesday Janie, Amy and I walked a little around the dog park on the Hike and Bike Trail and then joined Frankie for lunch at Moonshine (another of my to 5 Austin restaurants) which was glorious (love those Ruby Red Slippers). 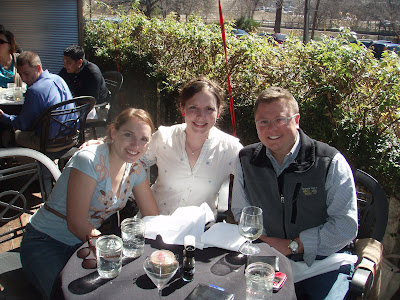 After another short shopping spree (again on South Congress), I went to work where Amy and I heard one of my former and favorite professors speak about the war between faith and science and a spectrum of reactions to their relationship. Afterwards, we met Aaron Valentine, Mel Behrends and Chris minus Michelle at Vivo's for drinks and queso. Yea! for restaurants that put flowers in your drinks! 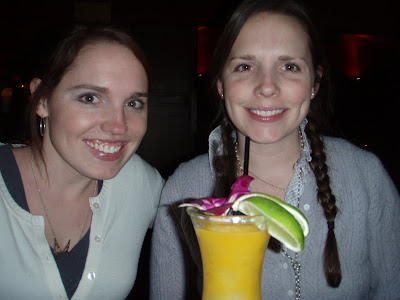 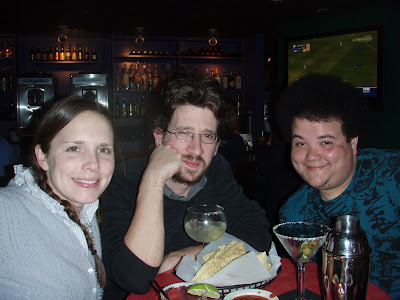 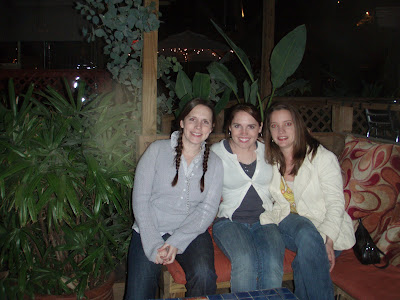 Thursday started off sad. The last day of having Amy or my mom or whomever in town always starts off a little sad... I have trouble having fun when I know it's the last day. And I always obsess over whether or not enough fun is being had. Thursday brought a good deal of time at work, despite what i tried to get done ahead of time. Fortunately, Amy brought her own work along. After rehearsal and then Beresheth, Amy was exhausted and we went home so she could pack. And for our final evening together, we crawled into my bed (which we share) and watched Bridget Jones' Diary. I was alarmed at how relevant it is to my life now that I've crossed over the Thirty mark, but it was still fun to watch. It always makes me feel a little bit better about my life. At least I don't have Bridget's public speaking problem...

Then again, I don't have her Colin Firth problem either.

So now Amy's gone and I'm lonely and sad and homesick, but still grateful. Always. For a wonderful family...

who should all move to Austin as soon as possible.
at 6:54 PM 2 comments: