Do you ever stop and marvel at where you are?

Do you ever stop and feel the emptiness deep in your gut that reminds you where you are?

I'm somewhere between the two right now. When I get to preach, or meet admirable people, or engage in life-changing conversation, I marvel. When I laugh with new friends who I didn't even know six months ago, I marvel. When I look at handsome men, eat expensive meals and dress in suits to talk religion, I marvel.

But when I sit alone at night, I feel. When I don't know who to call, I feel. When my grey sweatpants don't make anyone smile anymore, I feel.

And that's when I get scared.

I thought we got to take friends on with us, no matter where we went. If I called Moxi, I'd still sing Eponine's lines. If I called Brooke, I'd still be her fifi. Right? I haven't talked to them in so long...

I've sung onstage in front of thousands. I've preached in front of people years, books and degrees smarter than me. But singing and preaching and acting and dancing and writing and graduating and getting a job are nothing.

This was a weekend of firsts.

First time my dad's been to visit me in Austin.
First time Potter had an accident (number 2) on the floor of my room.
First time I got an I.V. from a fellow cast member onstage one hour before the show opened.

Yep, that's right. An I.V. and I have a needle phobia (Lance, back me up on this). But first let me back up.

I woke up at 4am Saturday morning, opening night, with the stomach flu. That's right. I fled my bed for the toilet and wondered what was powerful enough to disturb my Ambien and me.

Of course, this was disturbing because it was, as I mentioned earlier, OPENING NIGHT. And we only showed two nights. I've never been that sick for a performance. So I slept on the couch near the bathroom until 2pm, drank some pepto bismal and crawled out of bed. I washed my sheets for my parents who were to arrive at 6 and drove to the church. Once there, I sheepishly shared with the director and her husband (the "psychologist comforter") that I had the stomach flu but that the show must go on and I would be fine.

As Job and I ran over a few scenes before we got in costume, it became clear to me that I would not be fine. Whenever I moved my diaphragm to project, it bumped my stomach and my stomach went up in my throat and . . . well, I brainstormed what to do if I actually yacked onstage.

But the director's husband is a doctor. Not a psychologist, but a something. So he ran to the hospital and returned with a fistfull of pills and an I.V.

"But I have a needle phobia."

"But I need you to remember all your lines tonight, sweetheart."

It didn't hurt. But the tears fell anyway. I guess that's the nature of a phobia. But whatever he gave me did the trick. Apparently the director told her husband to give me the good stuff. Good stuff being the anti-nausea pills they give people in chemo-therapy. Probably the only time I'll ever say chemo-therapy with a smile. My nausea was gone for two days.

Until I ate dinner last night and woke up this morning with another tummy ache.

And spent my day off on the toilet and in bed.

Great. Unfortunately not another first. That happened a few months ago too. But it's all good. At least now I won't have to go to the real psychologist to get help with misguided guilt for missing work because of illness I couldn't control.

I'll go see her for other things.

The infamous one-liner of the foolish wife of Job who criticizes her husband's integrity and admonishes him to blasphemy.

Of course I do. I really wanted Satan, but if I couldn't get that, Job's wife was the next best thing.

First Baptist is doing J.B. a play by pulitzer prize-winning poet Archibald MacLeish written in the 50s after the despair of W.W.II. It's based on the ancient book of Job in the Hebrew bible, but set in modern times.

It is intense, but it is beautiful.

And truth be told, unlike the biblical tale, Job's wife brings redemption in the end.

I bring despair and I bring hope. I admit failure, I invoke love. I curse, I bless.

And something about that translates well beyond that ancient tale and into my life today.

No, Jesus cannot be your boyfriend.

I heard last week at the Current Retreat someone talking about the singles ministry at their church in podunctville, tx (I should have known the story was going downhill). He said that for V-day the ministry was throwing a "Jesus Is My Valentine" party.

You may not throw a party with that title.

What does that tell singles? "No one wants you but Jesus... lucky you!" "You're too ugly to get a real boyfriend, so you get Jesus!" "That bit about a nice personality doesn't date well, but an invisible savior does!"

I can't believe we buy into that. Jesus is not our lover. Gross. Mary Magdalene's maybe (that's for all the conservatives out there, i'm feeling cantankerous and pushy), but not ours! He's a god, not a boyfriend. We don't snuggle up with God under a plush blanket and watch chick flicks. We don't get flowers from God. We don't kiss God good night. And we sure as hell don't...well...you-know-what with Him.

Yuck. Not to mention that if you call God "Him," you've got a bunch of single men calling God their Valentine. Are we condoning homosexuality now?

Okay, I know. I've crossed the line. It's just that I hate that crap. I hate feel-good, cheesy, substitute-Jesus-for-what-culture-says-I'm-lacking-in crap. It's not right.

Yes, Jesus loves you.
Yes, people love you.
Yes, you are okay single and alone.
Yes, it sucks that your friends are being mushy with their significant others and you're going to watch your 159th episode of Sex in the City. But it's all good. I love Sex in the City.

You are whole. You are unique. You are beautiful. You are ugly. And God loves you (and me) anyway.

Do you think my therapist would buy this?...

"By following the simple advice I heard on a Dr. Phil Show, I have finally
found inner peace. Dr. Phil proclaimed the way to achieve inner peace is to
finish all the things you have started.

So I looked around my house to see things I started and hadn't finished;
and, before leaving the house this morning I finished off a bottle of
Merlot, a bottle of Chardonnay, a bottle of Baileys, a bottle of Kahlua, a
package of Oreo's, a pot of coffee, the rest of the Cheesecake, some
Saltines and a box of Godiva Chocolates." 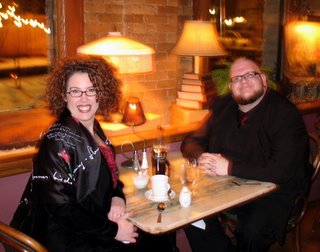 I'm scared. And I don't understand prayer. But because I have nothing else to cling to, I petition you.

One of my best friends (picture right with his wife of one year) is going to have angioplasty tomorrow (monday) at 8am to check out a shadow on his heart.

I am nervous, I am confused. But I love them and so I will be brave. Nothing comes as a shock anymore, but that doesn't mean there aren't still tears of fear.

Big Phil, I love you. And we're praying for you. For accuracy, for precision, for discernment, for peace.

Be strong and very courageous.

I'm off to Atlanta for the Cooperative Baptist Fellowship's "Current Retreat." Apparently, this is a retreat for ministerially oriented people who are under 40. Obviously I've never been before, but this will be my second big baptisty conference to attend (yes, I know that's not a real word)since I came on staff at First Baptist. Not that they (we) require me to go, but my salary is partially funded through a grant by the Lily Foundation and CBF, so it's their call.

I'm nervous, I admit. I've never been big on conventions or denominations, but I hear I will learn a lot. And I am a nerd, so I'll probably enjoy all the classes and speakers.

Plus, as a young marriend woman in my Sunday School class told me, "Maybe you'll meet some hot young minister there!" Oh, the smug marrieds; they mean well. Another one chimed in, "But don't let him wheel you off to somewhere else, we want to keep you here!"

As if I would ever make a life-changing decision based on a man. I mean, I've never done that before, why start now? 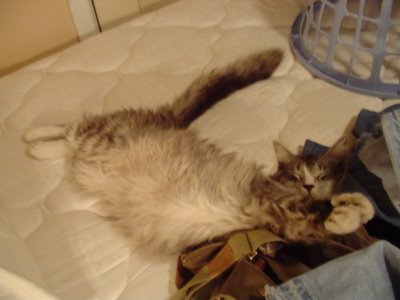 You wouldn't think he could based on this picture. But a friend nicknamed him "Satan's Little Helper," so looks can be deceiving. I mean hey, I look 15, but I'm a 27 year old pastor. Who would've guessed?

There's another cat in our house and Zorba is obsessed with her. He pushes at my roommate Bria's door until he un-catches the lock and gets in. So Monday I went in after him. Sarah was hissing, Zorba was hissing, he was in full bite form, but I had to get him out of there cause I needed to get to work.

And bite he did.

Down to the muscle.

Patrick says 90% of cat bites end up in infection cause they're puncture wounds which are difficult to clean. I was no exception. So I found a doctor on my health insurance here in Austin (cause of course I don't have a doctor yet) and headed to his office.

It was short, sweet and to the point. Prescription written, tab paid, office left. But he did say that he didn't think I was allergic to Cypron. Remember several years ago when that kid at Baylor got menangitis and everyone who'd ever been in the same room with him had to take the anti-menangitis pill? Well, of course that kid went to a Halloween party that Jer and I went to and long story short, my heart almost stopped beating and they told me I was allergic to Cypron. But today's doctor says that isn't the drug used in anti-menangitis pills. Oh lord. Just don't give me some damn pill that's gonna make my heart stop beating again. Two Pulp Fiction episodes is two too many.

So anyway, I got bit. It hurts. It's swollen. But I'm taking antibiotics to stop the infection.