Checking In With the Chicken

Here’s the thing about the Chick fil-A argument…

If you don’t read the news and you aren’t on Facebook, perhaps you haven’t heard about what’s going down with the Chick-fil-A controversy.  Let me give you a re-cap.

Chick-Fil-A is a “Christian” fast food chain that sells chicken.  And they have lots of  advertising signs along most major highways sporting cows advocating the consumption of chicken.  Cute.  Everyone loves cows.


However, they’ve more than once garnered national attention with their openly anti-gay agenda.  And yes, I use the word agenda because it’s not just that the president, Mr. Cathy, openly says he and his family and his company support a biblical view of marriage - that would certainly be his prerogative to believe and even share his beliefs in this lovely free country that we live in.  However, he and his company’s charitable arm, Winshape, have donated almost two million dollars to “Christian” organizations whose mission is, in part, to “heal” people from being gay.  Not $2million to Christian organizations like Compassion International, World Vision, Bread for the World, etc.  $2million to organizations that utilize “anti-Gay therapy.”  That’s an agenda.

So there’s been a host of meme, some of it funny, some of it sad, flooding social media sites and there have been several articulate responses from people (probably “Christians”) about why it’s ridiculous to communally or personal boycott Chick-fil-A.  And truthfully, it is not to Chick-fil-A or Mr. Cathy that I respond today, it’s to these other people weighing in on whether or not to buy that crispy fried white meat on a white bun with crunchy waffle fries (as if the healthiness factor weren’t enough to enlighten you). 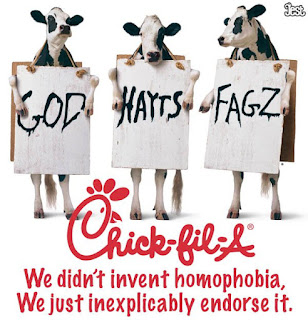 The tagline for one article I read stated: Do we really want a country where people won't do commerce with those who have beliefs different than their own? To which I respond…
Stick with me on this one.


I admit it, I was one of the nerdier ones.  I grew up playing chess and checkers and cards and word games.  I ate tuna sandwiches in my school lunch even though the other kids thought they smelled bad.  I wore glasses (big blue ones) and read books several grade levels ahead of my own.  I dissected worms in my backyard with a toy microscope I got for Christmas.

This summer, I'm combining the nerdiness of youth with my theatrical adventures... because sometimes nerds grow up.  And some of them compete in World Chess Championships.

Chess: The Musical is not what it sounds like, however.  It's actually a commentary on the cold war and is loosely based on the true story of Bobby Fisher (whispered).  Written by Tim Rice and the guys in ABBA, Chess opened in London to mixed reviews and so underwent reconstruction to the point that when it opened on Broadway, even the ending had changed (in one version the Russians win, in the other, the Americans win - talk about your fixer-upers).

Chess is what I would label as an opperetta in that it is almost entirely sung with minimal dialogue speckled throughout.  Produced by Austin Playhouse (running through the 22nd at Mueller) and Summer Stock Austin (August 2nd-11th at the Rollins), Chess has two runs and the latter will include fifteen teenagers.  Awesome.

I'm just in the chorus, but since our first run (with Austin Playhouse) is in their temporary facility (a tent) whilst they wait to break ground on their new theater, I'm one of six chorus members in a cast of 12.  And for AP, twelve is pushing the limits of bodies permissible backstage.  I have been smooshed up against more people and curtains and costume racks than I care to admit trying to squeeze my way onstage.  But it's worth it.  The set is gorgous.  The woman who plays Florence (the female in our Russian/American love triangle) can sing.  And by sing, I mean si-ing.  Wowza.  Our costumes reflect the set (and the chess board) and are black and white too.  And generally short.  What is it with Austin Playhouse and me ending up in short (occasionally plastic) dresses?  I digress.  But seriously, check us out.  Super hot, right?