You may have noticed the new icon on the right of my blog. Trust 30. It's a challenge set forth by The Domino Project in honor of Ralph Waldo Emmerson's 208th birthday. Participants will write for 30 days to hopefully inspire ourselves to be honest visionaries, reflecting and creating direction for our own futures.
Additionally, each day, I'll receive in my mailbox and inspiration thought or essay by one of 30 authors chosen to speak to this challenge. And the fun part of that is, one of the featured authors is my friend, Sam Davidson whom I have written about and referenced numerous times on this blog.
Finally, The Domino Project is releasing a collectible edition of Self-Reliance that looks really sweet. But unfortunately, they only made 100 books and they're all gone. :( So you'll have to read my work instead, I guess...
It is easy in the world to live after the world’s opinion; it is easy in solitude to live after our own; but the great man is he who in the midst of the crowd keeps with perfect sweetness the independence of solitude. - Ralph Waldo Emerson
So we're off. Thirty days of writing. Starting June 1st. Go.
at 11:54 PM No comments:

Perry May Parry for the White House... Stab Me Now.

So the man who, as recently as 2009, said that it was conceivable the Texas may secede from the Union (um... the United States of America) provided things in our government led by the abominable President Obama didn't change soon, is now potentially running himself for President of the Union he believes so strongly in that he may lead us Texans to abandon.
Potential announcement here as recorded by Austin's own Statesman.
What a dumbass. Sorry, Grandma. But this guy is a real jerk. He's screwed up so much for Texans that he can't do much more damage here, so he needs to move on to bigger and better governments to manage and people to ruin.
I seriously loathe this man. We've only ever agreed on one thing: Arizona's law allowing racial profiling, I mean, law to ensure that their precious state wasn't being invaded by aliens (of the Mexican persuasion) was wrong and immoral. But that's the only nice thing I have to say about Governor Perry. And since Grandmother taught me that if I can't say anything nice to not say anything at all, I'm stopping there.
at 3:37 PM 2 comments:

Email ThisBlogThis!Share to TwitterShare to FacebookShare to Pinterest
Labels: politics

It's here. Better late than never, eh? This is my Wish List for my 33rd Birthday which will be upon us in eight days. While my therapist suggested I register for gifts like women would for weddings or baby showers (debunking the idea that the community only helps provide for a woman if she's getting married or having a baby), I'm not ready for that. However, I will categorically share my wish list in three parts: What I Want, What I Need and... Be My Patron. Check it out...
WHAT I WANT
WHAT I NEED
So this final section is things I would like to have but can't currently afford. They are things that, if I lived in the 1800s or early 1900s I could maybe get or do because I am artist and I would possibly have a patron. That patron would sponsored me and my art allowing me time to write and perform and not worry about how to pay the bills...
BE MY PATRON
at 8:59 PM 5 comments:

Born This Way: my song and my tee-shirt

Stop the World, I Want To Get Off!

I started crying. About three minutes before the show ended. I never cry in live theater. The audience may think I'm crying (that is why they call it acting), but in neither real life or theater, can I turn on the tears. They're either there or they aren't. And this weekend they were. Saturday night. And then again at the Sunday matinee after my parents flew back to Missouri.
You see, I'm performing as a Chorus Girl (#8 to be exact... if you line us up alphabetically) in Austin Playhouse's production of Stop the World I Want To Get Off. And my parents met performing in this show 44 years ago at William Jewell College.
"The funny thing about a circle is, it has no beginning and no end," Littlechap concludes. And as I sat there onstage behind him in my 60's, Brittish, half-plastic, hemline-well-above-my-knees costume, my normally dry eyes swelled with tears and I hoped no one would notice as the mood would quickly shift and I would have to be all smiles for the final scene.
My parents were watching their daughter perform roles they had played themselves 44 years ago when my father was young and agile and my mother ironed her hair straight. This was before thoughts of marriage, parenting or grand-pet-parenting was even a reason to pause or cry "stop the world!" altogether.
They never imagined me and I never imagined myself playing a role in this show before their eyes. And the circle keeps on going.
Here we are, Chorus Girl and Littlechap 2011 and Littlechap and Chorus Girl 1967... 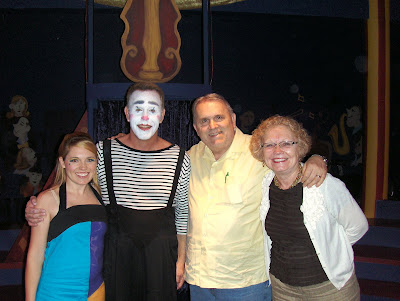 I don't actually like the show. I probably shouldn't say that because now you won't come see it. Don't get me wrong, it's conceptually compelling, the music is classic and the it's a nice history lesson (as history will always repeat itself lest we learn from it), but it's a show about a man, Littlechap, who basically embodies everything I hate about men. It's a sexist, racist, period piece that is ultimately a comedy as it tells an (albeit too late) redemptive story of a man realizing the folly of his grandiose dreams, insatiable lust, superficial successes and wasted relationships. (Please stay tuned for a post entitled, "A Feminist Response to Stop the World, I Want To Get Off, or Why Not All Men Are Grasshoppers.")
The show actually turns 50 this year (I must have a knack for doing timely shows... remember The Fantasticks last year on its 50th Birthday? or Inherit the Wind on the bicentenary anniversary of Darwin's birth in 09?) And it is not a show to be seen by the faint of heart. And by that I mean, if you don't have an appreciation for this type of theater (think Roar of the Greasepaint, Smell of the Crowd or even The Fantasticks for that matter), then you may not understand this work of art. Similarly, if you're not well versed in history (or if you're under 65), most of the jokes, references and cultural stereotypes will be over your head. In other words, unless you're a theater freak or a history buff, you may not love this show.
But, the performances are wonderful in case you do think you'd appreciate this fun musical. Rick Roemer as Littlechap is superb and as my father said, "the role is so easy to overact, but Rick did a beautiful job and showed much honesty with the character." Angela Davis as Evie (and Anya, Isla and Gennie) has amazing accents and characterization for all her roles. And, quite frankly, I'm pretty awesome as Chorus Girl #8. :) 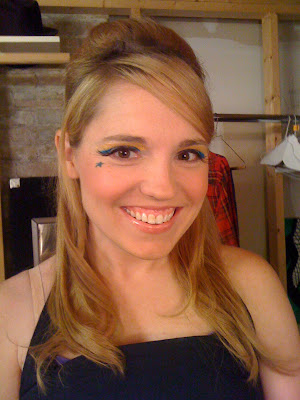 To buy tickets (HALF PRICE for STUDENTS!!) to this super show at one of Austin's premier professional theaters, grab them online or call the box office at 512-476-0084.
Famous songs from the show are "What Kind of Fool Am I?," "Gonna Build a Mountain," and "Once In a Lifetime." Famous people to play these roles include Joel Grey as Littlechap. And, of course, it was made into a movie in 1966.
Stop the World - I Want To Get Off! debuted on The West End 50 years ago, is set in a circus, and tells the timeless tale of Littlechap, a clown who conquers the world but loses himself. The story will be told through song, dance, drama and the artistry of the Austin Playhouse acting company. The show is a cherished musical classic - a boundless, shameless, and humorously entertaining production. (Yes, I stole this piece of promo from the website.)
And if you need a little help with context, here's some helpful cultural and historical reminders...
Again, to buy tickets, grab them online or call the box office at 512-476-0084. And maybe this little fool will see you there...
at 9:08 PM No comments: