"For Anna Catherine on Thanksgiving"

The first girl in generations,

you came when the century clicked

as our particular event,

our small surprise, our bonus.

that you'd be born intact

and healthy, and you were.

Today I wish you beauty, grace,

What makes us crave for those

we love such bounties of perfection?

how we try to church ourselves....

Squirming in my arms, you save me

from my tyranny of dreams

with nothing but your version of a kiss

and the sure, blind love of innocence.

from nines to zeroes to plus one.

Capped on a pallet, you flexed your toes

and let us count your fingernails. 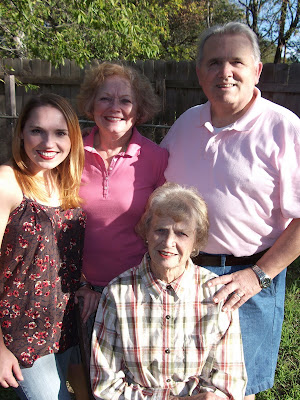 First holiday in Austin with the family... Mom, Dad and Grandma. A thankful day indeed!

In high school sometime after we got our licenses, my best friend, Moxi and I were driving somewhere, probably to Kelly's just outside of town, or maybe to Dominic's in the Country Club Village, or on our way to Savannah... who knows. But I remember being on a highway and Moxi putting a CD into the player in her car (we always took her car because it was relatively new, had air conditioner, and a CD player... I drove a 1980 Buick Century with none of those - or any - amenities). It was the 1993 Broadway Revival of She Loves Me. Theater was not just a hobby but probably a passion for Moxi and me. We did shows at Central High School together and even some at Robidoux Resident Theater, I think. Mox was always getting new CDs of musicals, and her parents often took her to see professional shows in Kansas City, Chicago or New York (and sometimes let me come along - Phantom of the Opera National Touring Company circa 1995). So Moxi put She Loves Me in the player and immediately began skipping to her favorite songs. "Listen to this guy's voice!" "How cute is this song?!" I remember as we were either leaving or arrive at our destination, we had to pull over alongside the road to listen all the way through the best song on the CD, "Vanilla Ice Cream."

Fifteen (or perhaps more, but who's counting?) years later, and I am singing that song onstage in the Wimberley Players production of She Loves Me. I drove to Wimberley several months ago to audition, knowing that the lengthy commute (often over an hour) and the lack of financial reimbursement/compensation for the performance (it's a community theater) were two strikes against it. But there seemed so many good reasons to do the show, I couldn't help but audition. Wimberley is a very quaint, hill-country town. My best friends Chris & Michelle were married in a creek in Wimberley, and I often visit their family who live around the area. The commute, while long, is pretty, once one has developed an appreciation for the hill-country landscape of gnarly bushes, cacti, alpacas and longhorns :) The town itself has lots of local shops and restaurants and when my family flies in this week, we'll stay three days down there in a cabin to take in the town. Additionally, my good friend (and husband in Evita), Jim Lindsay, auditioned for the show too. It's one of his favorites and I knew it would be fun to be onstage with him again.

Plus, I love the show. She Loves Me is a delightful adaptation of the French play, Parfumerie, written by Hungarian playwright, Miklós László,. Other adaptations of the script include movies, The Shop Around the Corner, In the Good Old Summertime, and You've Got Mail. And all of these hearken back to Shakespeare's Beatrice and Benedick.

So depending on which version of this story you're familiar with, I play Margaret Sullivan, Judy Garland and Meg Ryan, or any number of women starring in Much Ado including my favorite, Emma Thompson.

Last weekend marked our opening and the audiences really seemed to enjoy themselves. Here are a few pictures from our dress rehearsal... 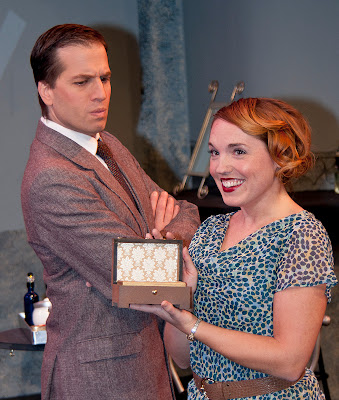 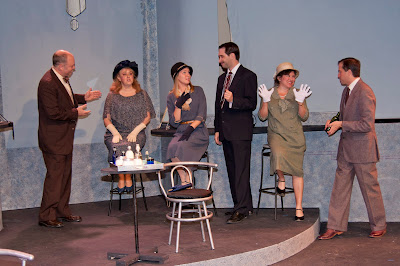 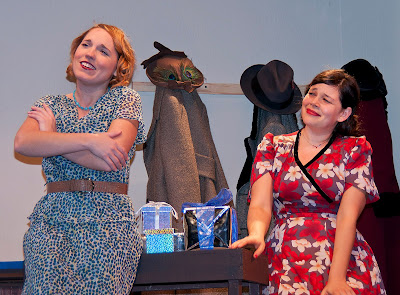 Also, local Austin radio station, KOOP interviewed Jim (who play Georg), Dawn (the director) and me (I play Amalia) last week. You can catch us on their show, Off Stage and On the Air around minute 40. This is the same program on which I did promo work for Evita, but I didn't sing this time around. Jim and I did do a short scene from the show though!