My Person and I have embarked on an Adriatic cruise.

I was wary. I get motion sick just riding on swing sets and elevators. I excused myself from the theater and threw up in the bathroom during that Captain-I-Got-Attacked-By-Somalie-Pirates movie. Plus the only other ship movie I've ever seen is Titanic, so this added to my anxiety. But my sister is a doctor, so, loaded with drugs and patches, I boarded on Nov. 18th. This is my view every morning. Cue jealousy. 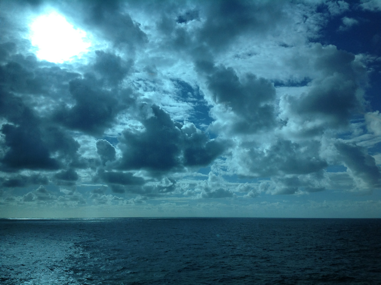 There are a lot of people on board this ship... and most of them are old. By "old" I mean my parents would be in the younger crowd here. I've thoroughly scoped it out. I can tell you how many sets of parents with young kids (4), how many families with teenagers (3), how many gay couples (4), and how many random youngish couples in their 20s or 30s (eh, maybe 8).  And according the the lady couple we met who travels together on these cruises all the time, there is officially one (1) single man on board who boarded the ship by himself (there is apparently an art to cruising - more details on this later).

These numbers aren't exact of course (except the single guy one - the ladies actually go to the photo station and scope out all the pics that the photographers take of couples, families and parties when we embark. So they know - one single man who got on by himself. I told you, for cruise professionals, its a fine art). There are 2000 people on board and I only see these people during meal times (and there are like 7 restaurants on board, and two different dinner times (we're at the 8:30 slot), and 15 levels on this ship. So... I might be off by a handful in one category or another.

As for walkers and terrible coifs... innumerable. But, we are having fun. We met a great gay couple that I had stalked for a few days. And there's the girl duo who make cruising a lifestyle. And a non-religious couple from Scotland (I say non-religious only because we talked about religion and faith for hours in a small Montenegrin restaurant one day). Our table-mates (everyone is assigned a dinnertime and table for the entirety of the cruise - you can eat at other restaurants, but its everyone's default) are interesting too. One lady is a scriptwriter and a New York Italian. She's a hoot.

Then there's the staff.  Now they're young. And they like to party. According to the girl from Zimbabwe who did my nails, there's lots of ship romances during the 9 months at sea (marriages not withstanding), and everyone is in everyone's business. People are always shacking up, and while interaction between staff and guests is forbidden, according to our lady duo friends, it happens... like last night... in the pool cubby. Yowza. When Person and I were returning from Venice (I WAS IN VENICE!), we ran into this kid by the elevators at midnight (I say kid, he's 23 - we met on the train from Rome with his parents). We had just created our own adventure trying to return to the ship after our visit to the opera (I SAW AN OPERA IN A PALACE!), and at midnight we finally climbed aboard. As I mentioned, he was by the elevators waiting for the dancers (many staff members are entertainers which includes the orchestra, jazz band, girls' trio, cover band, Broadway singers, dancers, specialty performers like pianists, vocalists, aerialists, magicians, comedians, etc.) to go out. I.e. leave the ship at midnight to head into Venice. This would be perfect if we were in America where, with the 9 hour time difference, it would be 3pm, but we're halfway across the world and it was midnight and they were just heading out to party in Venice. Ugh. That sounded horrible. Not to mention that it was super cold & windy outside, and water taxis (WE HAD TO TAKE THE WATER METRO TO GET TO OUR SHIP!) are very expensive. Maybe I'm getting old, and I do fit in on this ship more than I would like to think.

Plus I have a cold so everywhere we go I'm stocking up on kleenexes and popping pills and drinking juice. It was bound to happen. But after our 14 hour adventure in Venice (YOU GUYS, I RODE A GONDOLA!), I was sick and exhausted, so no heading to the clubs for me.

I am right now writing this from The Hideout, an area onboard the ship wherein there are tiny cubbies, carved out nooks and cleverly designed hiding spaces. 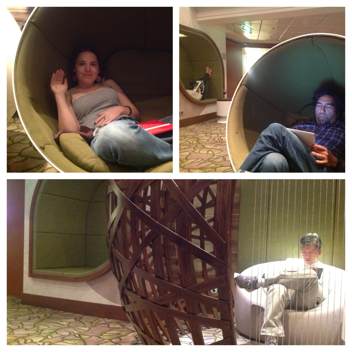 I lurve it here. I want to re-do my house so that it resembles cubby corner. Generally though, Person and I stick to the pool deck. It's cold here though, so we claim pool chairs by the inside pool where the music is relaxing, the air is warm, and I can get in and out of the hot tub as I please. Plus the health bar is by the inside pool. We spend most of our time here trying to read and write and eat healthy, but let's be honest, we mostly just sleep and munch french fries from the upstairs bar.
I'm sure most of my readers know what its like to be on a cruise, but as vacations with my family growing up rarely consisted of anything that a three-hour car ride couldn't give us, this cruise thing is news to me.

Fortunately, our friendly, dead-pan, Greek Captain is here to make my stay more enjoyable. Actually, that's the job of our "Cruise Director Patti," but since she makes me feel like I'm living in an infomercial, I prefer our Captain's welcome.

This morning his short, quirky announcement included news that because of high winds, the Ravenna port was closed, and we were unable to dock, let alone get off the ship. So we forged on, headed to Sicily. This is not our first bout with nasty weather. One day while reclining by the outdoor pool, albeit wrapped in wool blankets, it hailed. 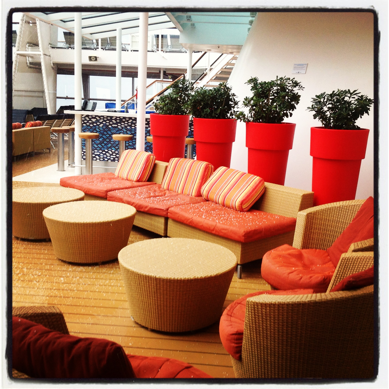 Yep, that white stuff is hail. And it rains all the time, but you know what that means? Rainbows. Which are out of control on the open sea. There aren't words. 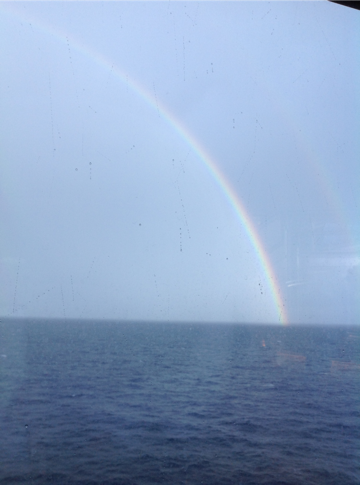 So from somewhere over the rainbow, this is Ann from the Hideaway, out.
at 11:23 AM