I Lost My Dad's iPod

Today was amazing... except that I lost my father's iPod.

This unfortunate accident made the day remarkably unamazing.

It's so sad too, because the day had been so good! All of us (me, Mom, Dad, Gloria, Jim and the two dogs) piled into the Jeep and headed to the Garden of the Gods, this very strange red world of dust and rocks and burnt orange trees (UT would LOVE it). It was remarkably beautiful and rugged all at once. 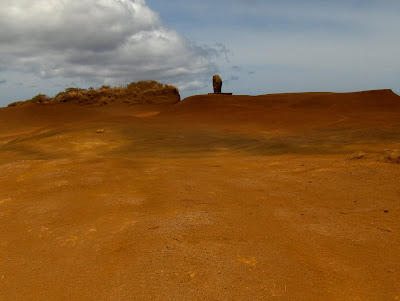 The sky was clear and the island Molokai could easily be seen across the ocean. 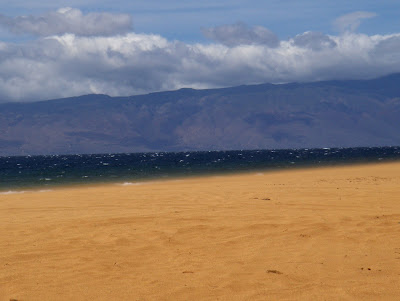 We were having a blast. Taking pictures, ooh and ahhing at the rock formations and the multi-colored ground a mixure of reds and oranges and yellows and forrests green only on the top where the dust couldn't reach the treetops to paint them orange. 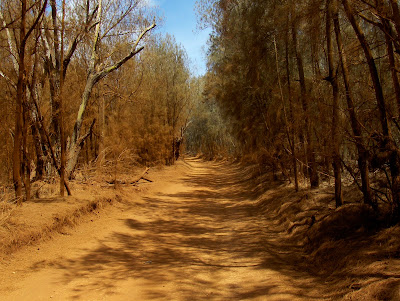 Bessy, one of Glo's dogs, got carsick and threw up all over her brother, Maverick. No biggie, we knew it was coming, that's why they were riding in the back trunk, on towels, but then Bessy leaned her head over into the back seat and threw up again all down Gloria and my mom's backs. It was awesome! So funny. We laughed for 10 minutes.

(please insert in your mind here the picture I took here of my mother's and Gloria's mortified faces immediately after the waterfall of puke which they would not allow me to post on the world wide web).

And while we had to drive only about 11 miles, it took almost an hour to get there because the roads are... well, rocks. Which made for a bumpy ride and infinitely more giggles. 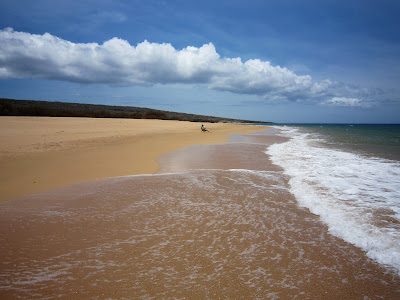 So we piled out of the car like clowns at a circus and Jim headed to the water to rinse off the towels Bess had thrown up all over, and I realized it was missing.

No iPod. And my stomach sank to think of how it had been resting on my lap (after my dad gave it to me to listen to Patti LaPone sing Evita) and then to imagine it probably falling to the ground in my excitement to hop out of the car and take pictures documenting our joy.

The reality is, it's just an iPod. And my dad assured me that it was no big deal (though I can't imagine how disappointed he must be - we bought it for him at Christmas and he loves it and for his Birthday we bought him the cord to hook it up to play in his car and a dock so he can play it around the house). It's just an iPod. I mean, we're in Hawaii. On the remote island of Lana'i. I rarely see my family (I haven't seen either sister or my grandparents since Christmas, haven't seen Glo in probably 3 years and haven't ever met Jim) and here several of us are... together... in paradise. We can afford to be here because we can stay for free with out family and because Grandma always pitches in on the cost for tickets. :) We are so lucky.

But the other reality is that if one thing isn't gonna getcha, something else will. I haven't had a roommate (or supplemental income) since January. We had major financial cutbacks at my job, including of mine and others' salary. Last month it was four hundred and some dollars to fix the car. The month before that one of the pets got sick. Then the leg of my cheap-o Ikea bed broke and isn't fixable, so now I'm sleeping on a mattress on the floor until I decide if I can fork over the money for a new bed. And now, though my father will protest, I have to buy him a new iPod. UGH.

And the people here are SO RICH. A billionaire owns this island. It costs over $400 a night to stay one night at either resort here. Fifty percent off lunch for four (cause my aunt works for the island) is still almost fifty bucks. The golf carts have their own GPS systems and even their own ball cleaners on the carts. It's ridiculous.

So while I'm trying to relax and enjoy myself, in losing this iPod, the stress has returned. I lost something that really gave my dad pleasure. I will lose a lot of money (to me) to replace it (money I had wanted to use to buy him a ticket to come see my play next month). I feel guilty about feeling guilty because it's just a little green box with headphones attached and my dad told me not to think twice about it. And in my head I'm balancing my checkbook and going round and round about distribution of wealth and justice and right and wrong which leads to more guilt for feeling envious and more anger at how unaware some people are...

It's an iPod. A stupid little toy that makes music. It can be replaced. This experience never can. We three made it here on four planes safely, and all our luggage arrived on time, and no one's sick, and we're having a blast. I've even already finished writing my postcards. So I should memorize the moment, freeze it and own it (I stole that from a rap song), write down everything, take lots of pictures, and truth be told... dad and I can make our own music.
at 3:32 AM

No one is sick....but the dog, you forgot the dog. Sorry about the Ipod - I know that sickening feeling. But it can be replaced and will be - don't stress.

I'm sorry you lost the Ipod. I know that's a horrible feeling, sucker punch to the gut feeling. I know you'll have fun despite it and I hope you do. Continue to soak up the beauty of those moments shared. Loving your posts, as always.

I can't believe the Ipod is lost :( Maybe it will show up at some point!!!! Ugh