Once The Aerialist and I arrived in Portland it actually took us quite a while to get going.  The Doctor had to do a walk-thru on her apartment, we had to go to the grocery store to get food for the trip (remember those tricky aerialist allergies?), we needed to say goodbye to My Person's daughter, and of course, we had to go to the Columbia outlet.

While the Aerialist and I had been waiting for The Doctor to finish up at her apt., we walked up Hawthorne Street sipping smoothies and talking about delicious food we can't eat.  In addition, she made the brilliant suggestion that we get matching Portlandian tattoos.  I said no way jose.  Matching piercings?  Sure. The Doctor and I had already done that once in college.

Fast forward a couple hours to after The Doctor had unloaded a queen blowup bed and some dress clothes on My Person's daughter, and the three of us were at the Columbia outlet eying the 70%off already discounted shoes.

The end result?  You guessed it.  Matching hiking tennis shoes. 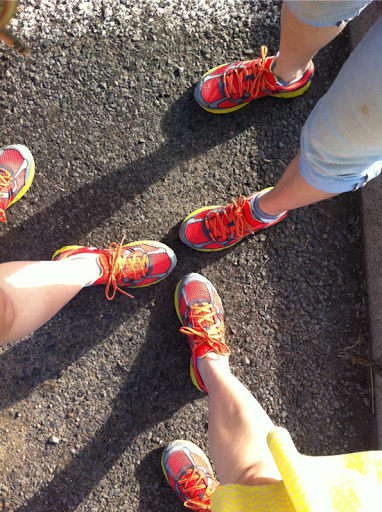 And after finally getting on the road and driving several hours south, we grabbed socks and strapped our feet in.  Our destination?  The top of Smith Rock.
Unfortunately the thrill of finding amazing, red $33 shoes quickly faded as we began to climb.  "Hey Doctor," I said, "This sign says this is 'Misery Trail,' perhaps we should take the other one."

"Yes, this is the most difficult trail," The Doctor said as I requested we pause for the fourteenth time.  "But, you can do it."

I was convinced that my end had come.  Surely the poor people in the next county over could hear me huffing and puffing.  But The Doctor suggested we rest again and then said, "You know what they call the guy who finishes last in his med class?"

More breathing.  I could no longer speak.

"Doctor.  In other words, it doesn't matter how long it takes you as long as you make it through."

Indeed we did make it to the top of Smith-Shoot-Me-In-The-Lungs Rock.  And indeed it was gorgilious up there. 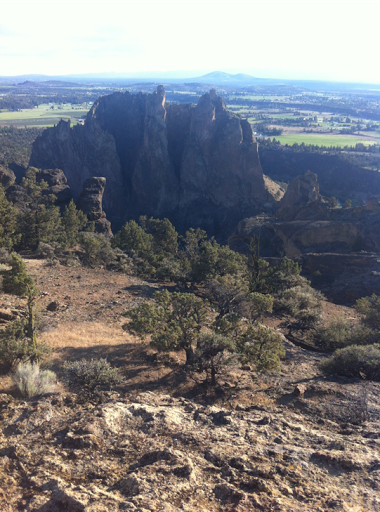 The hike back down was do-able (thank God), even if my right toes went numb.  And I didn't die... or throw up.

But by the time we got back on the road, I had to pee.  TMI, I know.  Unfortunately, we had to wait, wait, wait until we found a gas station in the middle of Oregon.  Once at a gas station, I found the outdoor WC and went in to take care of business.  I heard someone grab the door handle, but finding it locked, they moved to the next bathroom.  Someone else grabbed the knob right after that, but again I saw their shadow move to the the next one.  However, while blow drying my hands post-washing, I jumped as a fist began banging on the door.  I opened it, still wringing my damp hands and a gas station attendant said, "We didn't know if the door had been locked from the inside." And behind him was a trail of teenagers looking at me attentively.  Still startled, I walked towards our car as the man shouted to an adult around the corner.  "It's okay now, it's open."

For the love of God.  You can't let a lady pee in peace?  No one asked if anyone was in the bathroom, they just grabbed the handle and found it locked.  No need to get all up in fists about it.  Now I wasn't only startled, but embarrassed too.  Despite the fact that I was parched and craving an ice water, I refused to go into the gas station and face that mean door banger who called me out for talking to long to pee.

Back on the road again, all went well until the sun finally began to go down around 11pm (Seriously?! There's so much light!  I NEED TO LIVE HERE!).  The Doctor was driving and I was in the passenger's seat.  The Aerialist was in the back with the dog.  Suddenly, The Doctor and I gasped.  A black blur had just shot up from the ground on the side of the road, black cloak waving beneath it.  "What the hell was that," I shivered, "a demon?"

"It looked like a Dementor," The Doctor replied (Harry Potter lives!).

Just a few minutes later, another one shot over our windshield.  It was seriously freaky until we figured out our dementors were gigantic bats... which may not actually have been less scary.

But we made it to Prospect, Oregon before midnight, and snuggled into our quaint motel room with Sophie the dog jumping from bed to bed, beside herself at the wonder of this trip thus far.

And I had to agree.  From triplet tennies to the top of a mountain, from douche bags to dementors the first 344 miles were quite a journey.  The Reverse Oregon Trail had begun! 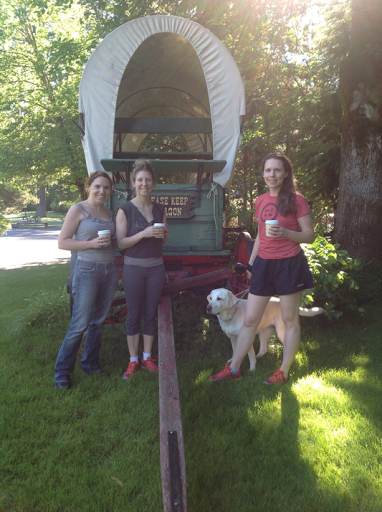