I seriously thought our second destination would not even come close to rivaling the amazeballsness of The Most Beautiful Place on Earth.  But it was SO RAD.  Here's why.

1. "It means what you think it means."  is what The Aerialist told us as she read the Wikipedia entry on The Grand Tetons, because we couldn't keep our eyes off them.  They're so beautiful.  We went from a gorgeous Oregon to a beautiful Idahoming.  And we needed detes on why in the world they're called the Grand Tetons.  I will refrain from giving my opinion on this name or it's etymology.  Because they look like this. 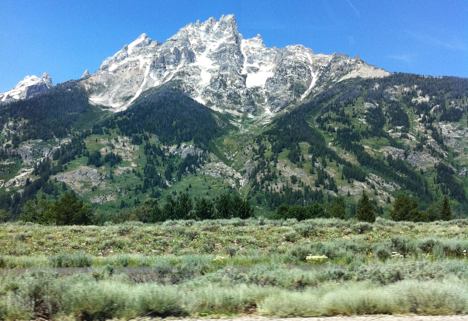 2. We SWAM IN A RIVER that was so clear I wasn't afraid to get in it (I'm a fraidy cat of water I can't see the bottom of).  It's like we were coming out of a glass mirror.  Wowza.  So much fun.  I could see the fish swimming around my legs.  I would have stayed there all day if The Doctor had said we could. 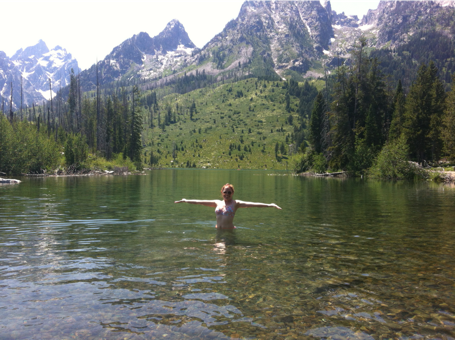 3. Driggs, Idaho is the hub of the Tetons.  By that we mean it is the best place to stay if you want to visit the Tetons.  Local restaurants, organic grocery stores, coffee on the fly, gluten-free bread, dog-friendly motels, and they don't make everyone who visits eat bison... we highly recommend it.

On the other hand, we do NOT recommend Jackson A**Hole.  At first we thought it was great.  We were wrong.  They not only wouldn't let Sophie the wonderdog eat outside with us at restaurants, but they wouldn't even let her into the park on the square - "Citations will be given."  Ugh.  Get off your highhorse Jacka** Hole.  In addition, this town almost made me and The Doctor cry.  Why?  Because their local playhouse thought it would be a good idea to do dramatic "historical" reenactments during which they fired guns so many times, my heart began to palpitate.  This little kid outside an ice cream shop dropped one of his scoops on the ground, and Soph wouldn't even touch it.  I should have known then that something was wrong.  This dog eats the last bite of everything The Doctor eats, including ice cream.  She's been known to peel every banana in a bunch (and then eat the bananas), open a can of condensed milk and drink it, you name it, she's eaten it.  So when Sophie refused the ice cream and the shots kept ringing out, the guy next to me said, "I think your dog is upset."  I looked down and realized Sophie's legs had begun trembling so hard that she could hardly walk, and I had to run into the ice cream shop and tell The Doctor to quit ordering and help me calm the dog.  Then poor Sophie tucked her tail so far between her legs I wasn't sure we'd ever see it again.  It was so sad.  In the meantime, the players continued to pretend shoot people (like a woman running down the road) dead in the street.  Very. Disturbing.  Children were screaming and running into the ice cream shop as we were running out of it.  Shame on you JackSonofa Hole.  You almost ruined the Tetons.

Thankfully, they're super awesome.  And even if you cognitively tried to ruin our trip through Idahoming, you couldn't.  The tetes are that beautiful.